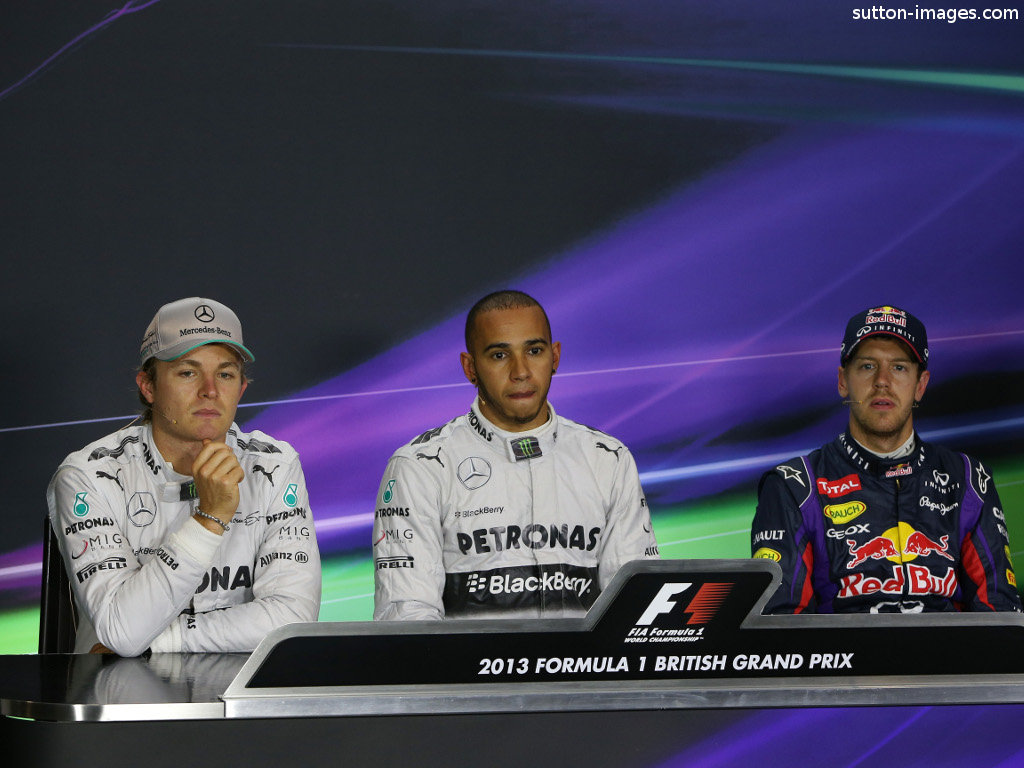 Q: Lewis, a great lap there at the end to take pole position at your home grand prix. How does that feel?
Lewis HAMILTON: It’s incredible! It feels just like it did in 2007. Just to see the crowd here today is fantastic – such a great turnout from everyone. So that was a lap for them. I hope that tomorrow we can do something special for them but this is really down to the team. They’ve been doing a phenomenal job, improving the car constantly. I haven’t been feeling 100 per cent comfortable all weekend – so I was really happy to finally get a lap.

Nico ROSBERG: It’s definitely a really, really great feeling, to go into qualifying and having such a car. To definitely have the fastest car… it’s really, really cool. It’s a great job that the team has done to get us to where we are now. And we’re also improving on Sundays – hopefully. I’m confident we have improved so tomorrow should be a bit better. I’m sure that still there are going to be other teams that are a little bit stronger than us but maybe starting on front for sure is going to help and maybe it’s going to still be possible to get a great result.

Q: Sebastian, there seemed to be some different tactics at play with regard to tomorrow’s race in terms of your saving one tyre of tyre, Mercedes saving another type of tyre. You see this as a very tactical type of weekend clearly.

Sebastian VETTEL: We’ll obvious see what happens tomorrow. It’s a long race but honestly very happy today. I don’t know, either Lewis found a short cut or he has something special around here. A phenomenal lap. I think it wasn’t in reach today. I was very happy with the lap I had at the end. And I think it was very close with Mark as well. I think we did what we could for the team and, yeah, it’s always nice to position well in qualifying. Especially around here qualifying is good fun, enjoying the high-speed corners and looking forward to tomorrow, for the race. We’ll see how well we are with tyres, looking after them. But as I said, for now very happy for the team. Hard to put the car in third place, Mark right behind, so I think it’s a good position to start from. Obviously our factory is very close to this track. Milton Keynes is not far away and yeah, I’m looking forward to tomorrow.

Q: Lewis, we’ve seen obviously this year quite a few times that qualifying is one thing but the race is another. What about tomorrow? How do you feel Mercedes will fare against the Red Bulls in the British Grand Prix?

LH: I think undoubtedly it’s going to be tough for us to keep Sebastian behind but our long run pace wasn’t as bad as we’ve seen in the past, so I’m hoping with the temperatures and a bit of care, we can nurture the tyres to get a good result. I’m going to be pushing, giving it my all tomorrow, as I’m sure Nico will as well, to finish up ahead.

Q: Lewis, difficult day for you yesterday, as you were saying in your comments after the free practice. You weren’t happy with the balance of the car. It’s quite a turn around from you and the team. Can you talk a little bit about that – and also the crowd power aspect of things: did you feel that today?

LH: The car is… obviously as Nico was saying, we’ve got a great car and to fine-tune it seems to be a little bit harder than what I’ve been experiencing in the past. So really trying to get the car underneath me and feeling comfortable and having an equal balance. With a Formula One car you’re always trying to balance it on a knife-edge. Just for some reason with this car I’m struggling to do that. In the past I would aim do that all the time. But got closer. We made the right steps, made a change going into qualifying which helped – still not perfect but it helped. And then the crowd to make a huge difference. After seeing them turn up in their thousands and seeing all the flags waving. Of course this weekend I come here with an extra boost of energy and just want to pay them back. Every year I come… this is the first time since 2008 that I’ve had a car that I’ve really been able to compete with so I’m really, really proud of what the team have done and I hope the fans can have a good evening and bring us some good luck tomorrow.

NR: Yeah, it’s a big battle we have, and usually it’s very close – not today – Lewis did a great lap in the end. It’s also a really, really big push, also for the whole team, that we’re pushing each other all the time, and that’s really good. We’re really lucky because we have a great atmosphere at the moment in the team, everybody’s going in the same direction and sticking together, so it’s fantastic momentum that we have at the moment.