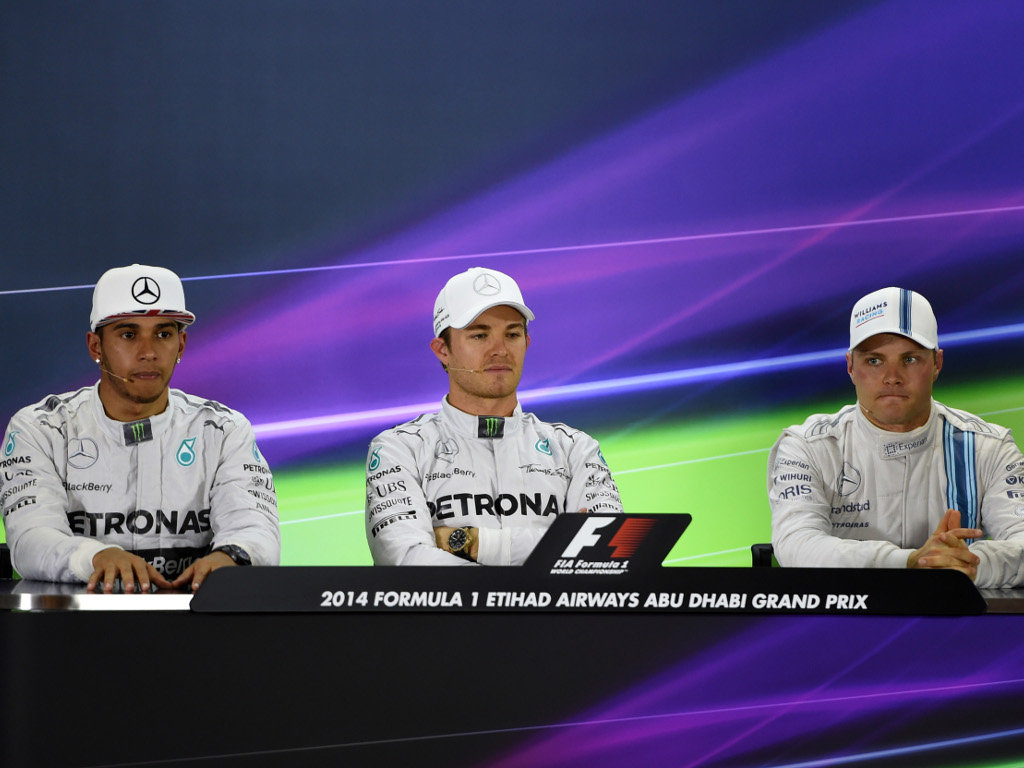 Q: Nico, three poles in a row now at the end of the season and I guess you have the vital advantage going into tomorrow’s grand prix. How do you feel about that?
Nico Rosberg: Yeah, it was a great day again today I’m sure. I’m thankful to the engineers and everything, because [they] did a good job, sorted out the car, you know, I was really happy with the set-up. It all worked out well. I got a good lap together in the end; I’m pleased with that. But, of course, it’s only one step, a very small step, because this weekend it’s about the championship, not about pole position or anything. Of course, I was hoping, you know, who knows… Valtteri said he got his perfect lap together, so there wasn’t anything else in that. Of course it would have been great if somehow there could have been a Williams between the two of us, but that can always happen tomorrow. For sure, starting first is a great place to be and it should be a good start.

Q: I guess the crucial question is how are you going to play the first corner tomorrow?
NR: Yes, that’s going to be interesting, as always. But I’m on the clean side I think, I’m not sure. Maybe none of them are realty clean, not sure, but anyways I have the advantage from pole, so that should be OK.

Q: Lewis, is it the case that the driver who made the fewest mistakes eventually came out on top at the end?
Lewis Hamilton: I don’t know. I don’t know how many mistakes Nico made but I generally didn’t have the best of laps but it was still a really good qualifying session, I really enjoyed it. The car was fantastic. So, as Nico was saying, tomorrow is the special day.

Q: Does it matter? At the end of the day you only need to finish second to win the title but how are you going to approach it tomorrow and again the same questions as to Nico, how will you approach that first corner?
LH: Same as every time.

Q: OK, let’s move on to Valtteri. Valtteri, well done, another top three. Do you think you’re fast enough to mix it with the two Mercedes drivers in tomorrow’s grand prix?
Valtteri Bottas: Thanks, yeah, it was a nice quali and especially the lap in the end, the car felt pretty good and I got a really good lap in the end. That felt nice because Felipe was really quick today as well, so it was not easy to beat him. Yeah, it’s good to be third and fourth again. I think in the race, as we’ve seen before, Mercedes is normally having a bit more advantage on Sundays than Saturdays, so it could be difficult, but for us the main target is to finish as high as possible and if something is going to happen and if we have the pace there is no doubt we are going to try to move forward.

Q: And what are you going to do into the first corner tomorrow?
VB: Same as usual really, just trying to gain any positions if there are possibilities but in the end the race is never won in the first corner, so that’s good to remember. So this race is no different to any other for me.

Q: Back to you Nico, a unique situation tomorrow, double points on offer for the first time. Your thoughts going into the race, and your mindset?
NR: Well, the mindset is that I need to get the job done and continue on the sort of form that I had in Brazil in the race. I’m sure it’s going to be a great battle between the two of us. Of course I hope for more than that – not just the win but some sort of help from Lewis, or anything, I don’t know… I mean I offered Valtteri… I’m paying [for] a wellness night [for him] tonight, a spa session, all-inclusive, hoping that he can be in extra special form and do the impossible tomorrow.

Q: Nico, you came here wanting pole position, you’ve done it. Just tell us what kind of statement you think your qualifying has made this year.
NR: Of course yes, qualifying was one of the strengths this year but that’s only… it’s not even half of it on a weekend, just the first step into every race weekend. It’s Sunday that counts and that’s where I’ve looked to improve a little bit recently, like in Interlagos for example where I managed to do the step – and that’s what I need to do again tomorrow.

Q: Lewis, in a similar situation in Austin, you tried to pass and pulled it off spectacularly; in Brazil you didn’t get a chance to try the pass. Which of those is it going to be tomorrow?
LH: I don’t know. We’ll see.

Q: What are your feelings though in terms of the way you’re going to conduct the race? Are you going to…
LH: Same as always.

Q: Valtteri, the 12th top three qualifying this season for Williams. It was a difficult start to this weekend for the Williams team, particularly in free practice one. Tell us about how you built up the speed this weekend.
VB: Well yeah, we only really had one real issue this weekend, it was the thing with the bodywork. We tried something different, it failed but it’s good we tried it in Practice One. It was no drama, everything was all set for Practice Two and everything went into the plan. And yeah, Practice Three the car felt OK but we still knew that adjusting some things we could get more out of it for qualifying and still not compromising the set-up for the race, so pretty normal weekend. Normally Friday we’d not be looking so good so pretty normal weekend so far for us. We’ve done a solid job but, like always, it’s tomorrow that really matters.QUESTIONS FROM THE FLOOR

Q: (Ralf Bach – Sport Bild) Question to Lewis. How many risks will you take tomorrow at the start to keep Valtteri behind you?
LH: I don’t know. I’m looking forwards, so just drive the same as I always drive.

Q: (Haoran Zhou – F1 Express) Question for Lewis. If you can pick a fight tomorrow, who is safer? Fight with Nico or fight with Valtteri? To you.
LH: Neither is safer, they’re both just as safe.

Q: (Heikki Kulta – Turun Sanomat) Valtteri, do you feel any kind of extra pressure now that you are some kind of factor in this championship fight?
VB: No, not at all. I think it’s kind of cool if I can be part of something. It’s nice. Obviously for me the maximum I can get at the moment is fourth place in the championship and the main thing for us as a team is definitely securing the third place – and that’s our target tomorrow and to achieve that our goal tomorrow is finish as high as possible where we can. So no different race to any other for me.

Q: (Dan Knutson – Auto Action / National Speedsport News) Valtteri, qualifying started at 5pm like the race tomorrow. During that hour, do the track conditions change much?
VB: Quite a bit, yeah. The temperature is definitely still dropping. The air temperature and also the track temperature so that affects how the tyres are behaving so, you know, for the tyre life of the tyre it should only get easier to us end of the race. So maybe at the end of the race everyone can see bit longer stints than in the beginning. That’s the main thing really. And if some people are struggling with the cooling of the car, that should be a bit easier in the end of the race.

Q: (Livio Oricchio – Globo.com) Lewis, this is not your style when you don’t fight. You have to go to the fight. Do you consider, maybe, in this specific race, to race for second place, that would be enough for you?
LH: I don’t know. We’ll see. You’re right, it’s not my style, so we’ll decide tomorrow.

Q: (Chris Medland – crash.net) Nico, Lewis was saying that he didn’t really get a lap together today, he made a few mistakes in qualifying. Do you feel that that is a sign of the pressure, that you’re handling it better so far this weekend?
NR: I don’t know. Of course pressure is one of the hopes that I have. If Lewis feels the pressure and here makes a mistake as a result, a bit like today – I haven’t seen it – but if you’re saying that and a bit like Brazil and that’s the sort of opportunities that I’m looking for and I’m trying to push for. I push flat out, all the time to try and keep the level extremely high and that’s all I can do really and try and go for the win and keep the pressure on.

Q: (Livio Oricchio – Globo.com) Valtteri, if you overtake one of the Mercedes cars, do you think it’s realistic to keep one of them behind you during the race?
VB: Well, yeah, it’s difficult to say now. We will see tomorrow. Sometimes this season it’s been difficult to predict in detail about the race pace and how we’re going to be, how the tyres are going to behave, how long stints we can do, there’s a lot of factors. We’ve seen that we have quick straightline speeds normally, so that normally helps us defending, so that’s on our side I think. But it’s really difficult to say, we’ll see tomorrow.

Q: (Heikki Kulta – Turun Sanomat) Nico, how intensely is your father living this weekend? Is he supporting you all the time, or how does he do it?
NR: Yeah, of course my family is intensely watching and I’m sure it’s as nerve-wracking for them and intense as it is for all of us here and that’s great to know that they’re supporting me and also my Dad wrote me… or we had a discussion about it. He gave me his advice for this weekend and I try and apply that or take whatever I think would help me and that’s it really.

Q: (Phillip Merrell – AMEInfo.com) Lewis, how does this finale compare to 2008, given your position and the double points system?
LH: I don’t really remember much from 2008 but obviously it was a great season and this is a lot different, just much older and hopefully wiser and I’ve learned a lot along the way. Yeah, it’s a great battle. Obviously it’s different when you’re racing your teammate to racing someone from another team but just as exciting.

Q: (Chris Medland – crash.net) Lewis, what’s the over-riding emotion for you after qualifying with the gap you’ve got to Nico? Are you just happy to be in P2 and where you need to be or are you disappointed with your performance?
LH: I’m not particularly disappointed with it. Of course you always want to be on pole, that’s what we work for. I’ve had very good pace throughout practice and particularly the long runs which is comforting and then in Q1, Q2 was good, Q3 just wasn’t… didn’t really put a comfortable lap together but it wasn’t really lots of mistakes or anything, it just wasn’t a great lap. Nico did a great job but we’re still there for the fight tomorrow.