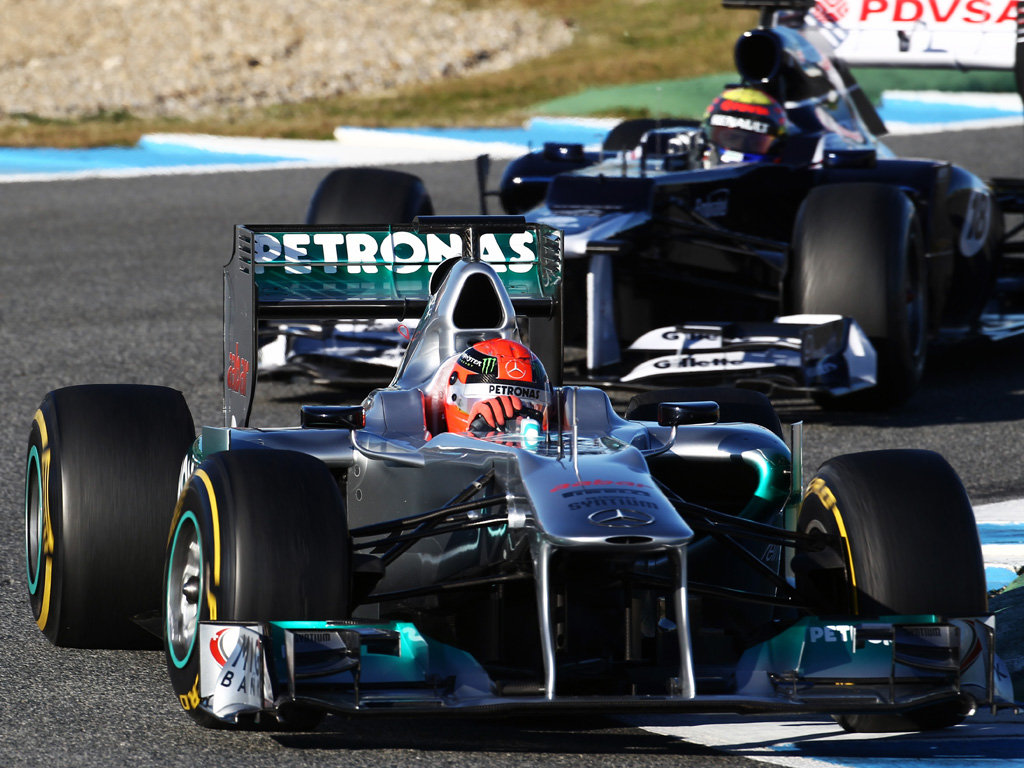 Michael Schumacher led the way with the “old” while Mark Webber shone for the “new” brigade on day two of the pre-season test at Jerez.

Whereas the returning Kimi Raikkonen and the stepped noses dominated the headlines on the opening day, it was Schumacher and his 2011 W02 that produced the goods on Wednesday.

With Mercedes opting to only introduce their new challenger at the Barcelona test, Schumacher and team-mate Nico Rosberg are putting a developed 2011 chassis through its paces in the south of Spain.

According to the BBC’s Lee McKenzie, the Brackley squad are running the old car as “they are trying to hide a clever new front wing they have developed – they don’t want their rivals to see it too early”.

Schumacher, who was the second busiest man on the track having completed 132 laps, had no problems topping the timesheets as he was the only driver to dip under the 1:18 mark.

Webber, though, proved that there is once again plenty of pace in the new Red Bull as he was only 0.623 off Schumacher’s best effort of 1:18.561.

The RB8 was the most impressive of the “new” cars, but Toro Rosso’s Daniel Ricciardo kept his Australian compatriot honest most of the time and was a further 0.403 off his pace.

Jules Bianchi, driving for Force India in the morning session before handing over to Paul di Resta in the afternoon, put in a decent shift and his 1:20.221 earned him fourth place with Lotus’ Raikkonen completing the top five.

Raikkonen was limited to a handful of laps in the morning after he hit a bump at the end of a kerb and some debris went flying off his car.

Ferrari and McLaren were once again well down the timesheets with Felipe Massa in seventh place with a 1:20.454 and Jenson Button a further 0.234s behind in eighth spot.

“The thing to remember about Ferrari is that this is a revolutionary car for them,” Sky Sports’ Ted Kravitz reported.

“It’s taken them in a direction away from the direction they’d taken in the last few years and with such aggressive concepts as the pullrod suspension and the very tight aero packaging, the team say they have a lot to learn and understand about the new car.”

He added: “The team tell us they’re not even looking at Webber’s 1:19.1s and at present they don’t know if they can match it, because that’s not the focus of their work. That’s reassuring for Ferrari fans, but I’m sure the drivers will be anxious to know where they stand in terms of pace as soon as possible.”

McLaren also insisted at the close that it’s all about learning.

Caterham’s Heikki Kovalainen was the busiest man, having completed 139 laps, while HRT’s Pedro de la Rosa, who is driving a 2011 car, was more than four seconds off the pace with a 1:22.628.