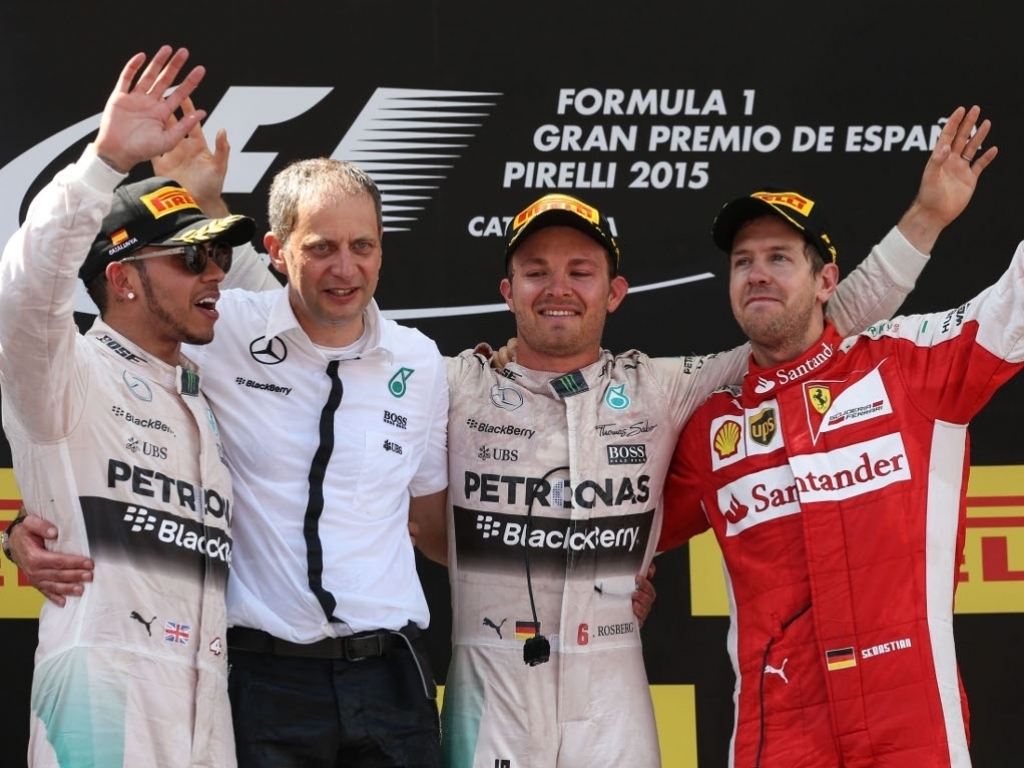 The Development War
Red Bull's rhinoplasty and the liposuction on Ferrari's SF15-T captured the media's imagination before the Spanish Grand Prix. However, the updates on both cars failed to deliver a major step in performance relative to Mercedes.

Sebastian Vettel knew this before the race. "The gap is probably a bit bigger than it was the last couple of races," he said on Friday.

As Ferrari's upgraded aero package was, according to some observers, a 'B-Spec' car, the men at Maranello might be concerned, especially since the Merc upgrade was relatively modest.

That said, the lead Ferrari in the 2014 Spanish Grand Prix was almost lapped by both Mercedes drivers. In real terms Vettel was 40 seconds closer in this weekend's race. Incidentally, the gap between the winning Mercs and the third-place car in 2014 (Red Bull's Daniel Ricciardo) and 2015 (Vettel) was around the 45-50 second mark.

It is well documented that Red Bull will need more than a nose job to repeat that kind of result this season.

Title Three-Way?
Sports editors around the globe will be cobbling together stories about Nico Rosberg rejuvenating his title hopes as he is now just 20 points adrift of Lewis Hamilton.

No one except the most dyed-in-the-wool Hamilton supporters wants to see the Brit romp to the title unopposed, though most measured F1 fans still fear that at best the 2015 season will be a two-way contest between the Silver Arrows.

A glimpse at the timesheets coupled with the underwhelming performance of the Ferrari SF-15T-B-Spec suggests that Mercedes domination is likely.

This belies Vettel's combative defence against Hamilton during the middle phase of the race when, after the first pit stops, the German kept the Mercedes at bay in a straight fight.

Mercedes eventually cleared the Ferrari through a smart alternative strategy, but Vettel delivered a statement of intent: The Prancing Horse still has the potential to take points off Hamilton and Rosberg and have direct bearing on the title.

'The Scariest 30 Laps Of My Life'
Jenson Button has driven a lot of fast cars and faced his fair share of high-speed shunts in his 270 grands prix. Yet the above quote is how he described his experience behind the wheel of the MP4-30 in Spain.

Team-mate Fernando Alonso echoed the Brit's thoughts. "It was scary. No brakes for the whole in-lap, and for the pitstop even less," Alonso said.

Five races into the season and the MP4-30 is slow and scary. It is also unreliable, having failed to start and/or finish 40 per cent of the races it has entered. The reunion with Honda has, thus far, been an unhappy one.

But F1 anoraks know that the history book tells an intriguing story about constructors taking on new engine suppliers.

Twenty years ago McLaren wed itself to Mercedes. Initially, the marriage was an unhappy one. The McLaren Mercedes MP4-10 was a "radical" car, according to the experts, but this failed to translate into results and in 1995 mechanical failures (most of which were engine-related) forced the car out of 35 per cent of the races it started that season.

The postscript is, of course, that Mika Hakkinen won successive championships with Mercedes power in the late 1990s.

Nico Who? Or The Midfield Blues
As one Nico took his first win of the season, the other Nico came home in a rather bedraggled 16th – ahead of only three other cars, one of which was Button's woeful McLaren Honda.

Many lesser drivers have competed in Formula 1 in the five years that Nico Hulkenberg has been in the sport. The problem for the German now is that the catalogue of better drivers grows ever larger.

The Spanish Grand Prix is perhaps the most forgettable of The Hulk's career. Not only was he lapped by his namesake in the Mercedes on lap 32, but he was also overtaken by Carlos Sainz on lap 21 – yet another prodigy who has moved ahead of the German in F1's brutal pecking order.

The Sainz Show
Speaking of Sainz, the young Spaniard stole ninth from Red Bull's Daniil Kvyat on the last lap of the race and also beat hotshot rookie Max Verstappen in the sister Toro Rosso.

What does this mean? For one thing, Sainz is 10th in the championship standings and ahead of both his team-mate Verstappen and Kvyat.

A B-Spec Vettel
For years Vettel faced withering abuse from critics who charged that he could only win races when he was in the cockpit of the best car on the grid.

His race victory in Malaysia went some way to showing the critics the finger (no, not that one) and his driving at Barcelona highlighted his defensive prowess.

The four-time champ is more than a one-trick pony for whom qualifying on pole and scampering into the distance is the only route to success.

Yet his desire to win remains and he was frequently heard complaining about backmarkers ruining his race in the later stages of the Spanish Grand Prix. "If you are a racing driver there is always something to complain about, especially if you are German," he said after the race.

Levity At Lotus
Lotus, like Vettel, also showed the lighter side of Formula 1.

"Ice pack redeployed," Lotus tweeted after their front jackman took one for the team when Romain Grosjean overshot his marks in the pits and rammed the jack into the most sensitive area on the male body.

But the highlight of the race, it could be argued, was seeing Pastor Maldonado's Lotus, without a strut to support the rear wing, overtake Button to make a mockery of McLaren-Honda as well as the hundreds of millions teams spend on seemingly superfluous aerodynamics.