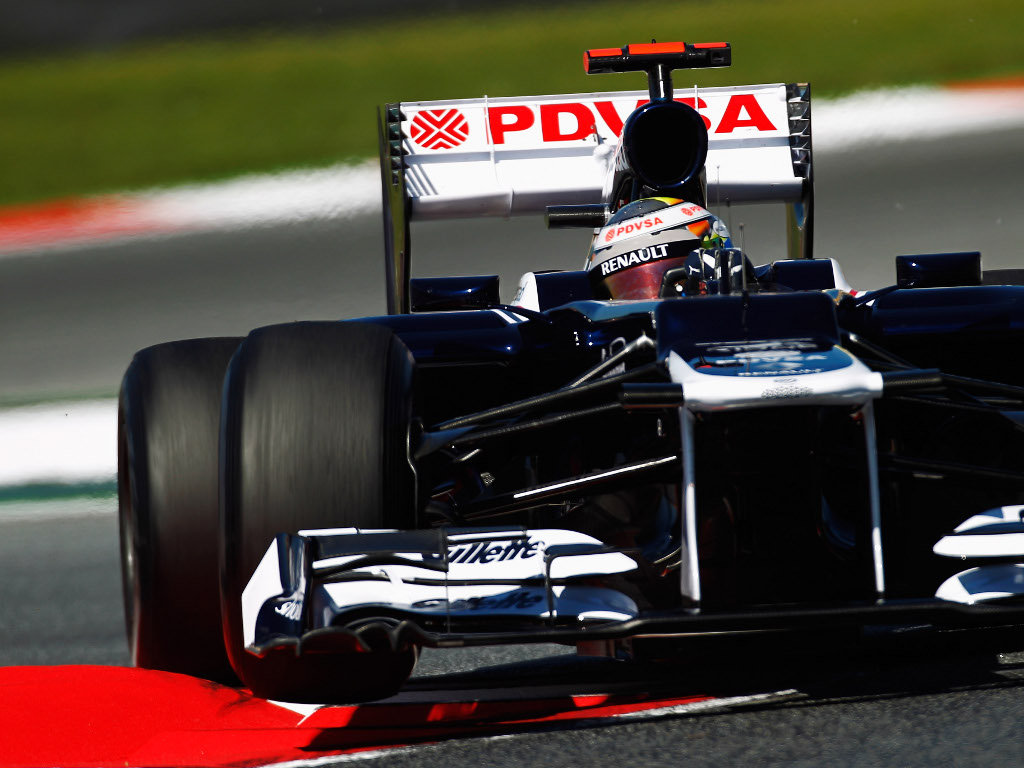 Pastor Maldonado pulled off the shock of the season when he claimed an assured victory at the Spanish GP on Sunday.

The Venezuelen started from pole position after Lewis Hamilton was excluded from qualifying and had a solid start, slotting into second place behind Ferrari’s Fernando Alonso. The Williams and the Ferrari were involved in a race-long duel at the front shadowed by the Lotus of Kimi Raikkonen and further back by Romain Grosjean who hit two cars on his way to P4. He was followed home by Kamui Kobayashi in P5 and Sebastian Vettel in P6.

Both Mclarens and Red Bulls had mediocre races, but nothing to compare with that of Michael Schumacher who misjudged his braking and slammed into the back of Bruno Senna’s Williams eliminating both cars on Lap 13.

Race Reportbr>It was a pale sun shining down on Barcelona but no rain as had been forecast earlier in the week with an ambient temperature of 22C and the track at 33C. There was a great deal of surprise that the stewards had relegated polesitter Lewis Hamilton to the back of the grid after being underfuelled for his final run in Q3.

Start
Elevated to pole after Lewis Hamilton’s summary demotion to the back of the grid Pastor Maldonado got a great getaway and moved across the racing line to block Fernando Alonso. Having snatched the lead from P4 last year, snatching it from P2 this year was fairly easy. Maldonado braved it out as long as he could, but Alonso had the inside line and the lead into Turn 1 was his.

Further back Romain Grosjean got jumped by Kimi Raikkonen and tagged a fast-starting Sergio Perez going out of Turn 1, pushing Perez off track. Perez got a puncture and had to pit at the end of the lap – although not before he rejoined the track in a dangerous way, something missed by the stewards.

Felipe Massa had got an excellent start but was immediately under pressure from Mark Webber. Lewis Hamilton was up to P17 by Lap 3 having had a very cautious opening lap in which he overtook the Marussias and then lost places to them again. By Lap 9 he was up to P13.

The Red Bulls had average starts and on Lap 7 Mark Webber was in for harder tyres, followed a lap later by Sebastian Vettel.

At the front Fernando Alonso wasn’t sprinting away from Pastor Maldonado, though both were edging out a gap to Raikkonen, who in turn was getting a significant edge on Grosjean. Despite the second Lotus losing part of his front wing with his bump on Perez he was continuing at speed.

On Lap 10 Alonso and Grosjean pitted for the first time, followed a lap later by Maldonado and Raikkonen. Grosjean’s pit-stop had put him behind the yet-to-stop Bruno Senna and the Lotus driver wanted to get past him in a hurry. He barged into Senna on the inside of Turn 1 and lost more bodywork. Despite the collision there was no investigation – Grosjean’s second contact in the race.

Senna was already losing time on worn tyres, but they weren’t bad enough to allow the following Michael Schumacher to take advantage, after a lap behind the Williams he was able to use the DRS down the main straight and close up rapidly on Senna into Turn 1. Although the Brazilian moved his car slightly in the braking zone it looked very much like Schumacher wasn’t expecting him to brake so early and piled into the back, taking both cars out of the race. The stewards decided they would rule on that clash after the race.

The accident put a great deal of debris on the racing line and although in other situations Race Director Charlie Whiting has brought out the Safety Car, in this situation he chose to cover the hazard with double waved yellows – although both Felipe Massa and Sebastian Vettel would pick up drive-through penalties for not slowing down enough going past them.

Lewis Hamilton was in for tyres as late as Lap 15 and again he had a slight problem with his left-rear (the problem corner in Bahrain) after the used tyre wasn’t cleared away following the stop. This time the delay was fractional.