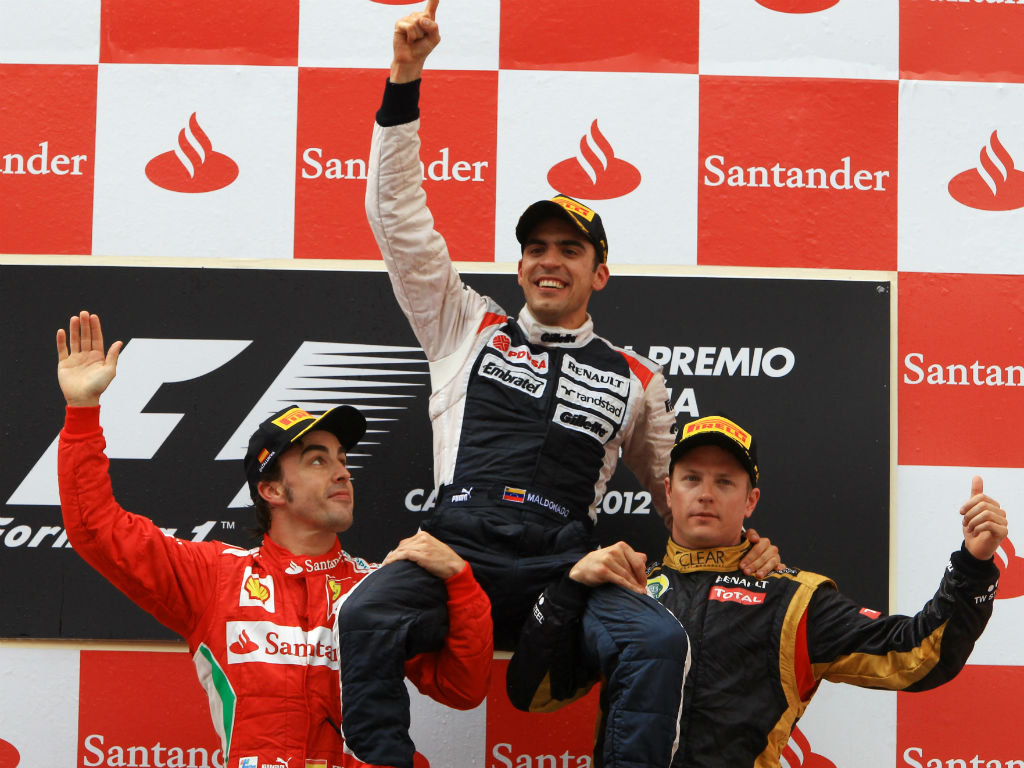 Another belter of a race, the fifth winner in five races, but the Pirelli malcontents are beginning to grow…

Another belter of a race, the fifth winner in five races, but the Pirelli malcontents are beginning to grow…

Star of the Race
Pastor Maldonado, Williams, 1st
Five races, five winners and joyously one of them is now Pastor Maldonado. There could be no more popular winner than a Williams driver on the weekend of Frank’s 70th. (Even though EJ and the BBC had celebrated Frank’s 70th in China.) And he didn’t put a foot wrong either – this wasn’t an inherited win, like a ‘Panis at Monaco’ – this one was sweated out. Obviously he got lucky in that he didn’t have Lewis Hamilton to contend with from the start – because if the engineer in charge of Lewis’s fuel replenishment in Q3 had been keeping an eye on it, then Lewis would still have been on pole. In fact, there’s a bit of banter in the PF1 office now that former Williams man, Sam Michael, could be the new McLaren Albatross. Last season when he was with Williams they were dire, this season he’s left and they’re winning races, while the team he’s moved to are dropping wheel nuts and running out fuel in qualifying. There’s no science to back up this theory and the contrast in fortunes is probably more to do with Renault engines, Mark Gillan and Mike ‘Prontaprint’ Coughlan arriving at Williams, but it’s a thought.
Surely there will be no more questions now about the validity of the investment in Williams from the Venezuelan state oil company. And with no official visit to the UK from premier Hugo Chaves scheduled any time soon, the sound of the Venezuelan national anthem ringing out followed in quick succession by God Save The Queen is going to be an interesting combination confined to GP weekends.

Overtaking Move of the Race
Lap 40: Lewis Hamilton on both Toro Rossos
Schumi might not like the Pirellis, and Mark Webber’s getting a bit brassed off about them now, but the differing rate of degradation provided for overtakes in places we’d never seen at Barcelona before – way beyond the remit of the DRS. Lewis got past Bruno Senna into Turn 11, Kamui’s favourite overtaking spot was Turn 10, (with a little tyre kiss thrown in for good measure), Sebastian took P5 off Nico Rosberg uphill into Turn 9, but Lewis drove past both Toro Rossos one on the inside of Turn 3 and one on the outside of Turn 4 on the same lap. Epic.
Lewis had every right to be hacked off by the stewards, but his pace on Saturday was phenomenal. If Barcelona is supposed to be the universal track where a good lap time bodes well for all kinds of circuits, then to be almost half a second quicker shows that the team have taken a significant stride forward.

Fernando Alonso, Ferrari, 2nd
No more damage limitation for Fernando Alonso, with the updated F2012 we’re into pace exploitation. How great a job he did was evident from how far back his team-mate was. Perhaps Felipe will soon join the Schumi chorus.

Romain Grosjean, Lotus, 4th
The ying to Kimi’s yang is Romain Grosjean, the man with the biggest neck in F1 since Justin Wilson. Romain survived more contact en route to a fortunate P4. He had a contact with Sergio Perez on the opening lap that could have ripped his front wing off or spun him round in front of the field but ended up giving him nothing but a bit of lost impetus and a slightly less-than-showroom Lotus. On Lap 12 he caused an avoidable collision with Bruno Senna that lost him some more wing parts but should have been investigated by the race stewards and also should have resulted in a drive-through (maybe harsh on a first offence but given that he’d already ruined Perez’s afternoon it should have been automatic).

Kamui Kobayashi, Sauber, 5th
He bounced off both Button and Rosberg on his way to P5 after a disastrous opening lap of the race. A great recovery.

Sebastian Vettel, Red Bull, 6th
A race that had everything for Seb apart from a hatful of points – great overtakes, lots of pit-stops, a drive-through penalty and a new nose for a reason he didn’t fully understand. Or was prepared to reveal.

Nico Rosberg, Mercedes, 7th
An afternoon spent getting to know the W03’s tyre deg a bit better without the anxiety of working out where his team-mate was in the process.

Losers
Race Stewards
Like football referees we ought to have them named very prominently so we can see who’s making the race-deciding decisions. There also should be some formal process for them to explain their decisions. It’s not like they have to make split-second verdicts, they get the luxury of replays and post-race analysis and still they come up with a load of rubbish.
Take this race. Why was Lewis Hamilton sent to the back of the grid after qualifying when it was his second lap time in Q3 they should have thrown out? We’re here for the show and at least Lewis provided something to watch. With one minute left on the clock in Q3 only two cars had set a time! Fans don’t fill the grandstands to see great tactical uses of the rulebook – as demonstrated by Vettel sitting for a minute at the end of the pitlane at the start of Q3 to make sure he was first in the queue. Hamilton put in two attempts at pole, some cars only tried once, two didn’t even bother setting a lap time and one was on the back of a lorry. Did the Sauber have enough fuel in or did they not bother checking because it didn’t get into Q3?
Hamilton wasn’t allowed to keep pole which was the correct decision, but if you infringe on your fastest lap, such as cutting a chicane or going too much off track, you lose that time. Hamilton clearly had enough fuel in for his first run. But he wasn’t sent back to P6, he wasn’t even relegated to P10 for being thrown out of Q3, he went to the back of the grid. That has to be either stupidity or prejudice, because there’s no logic to it.
Now take Lewis’s actions at the Hungaroring last year. He spun the car on track and flicked it round to point the right way just as Paul di Resta was coming through. Di Resta had to swerve his Force India to avoid the McLaren and the result was a drive-through penalty for Lewis. In this race Sergio Perez was pushed off track by Grosjean. He then angled his Sauber straight back to the track and rejoined just in front of Hamilton who had to throw his car off the circuit, picked up dirt and dust on his tyres and then got passed by BOTH Marussias into the next corner. That’s surely an