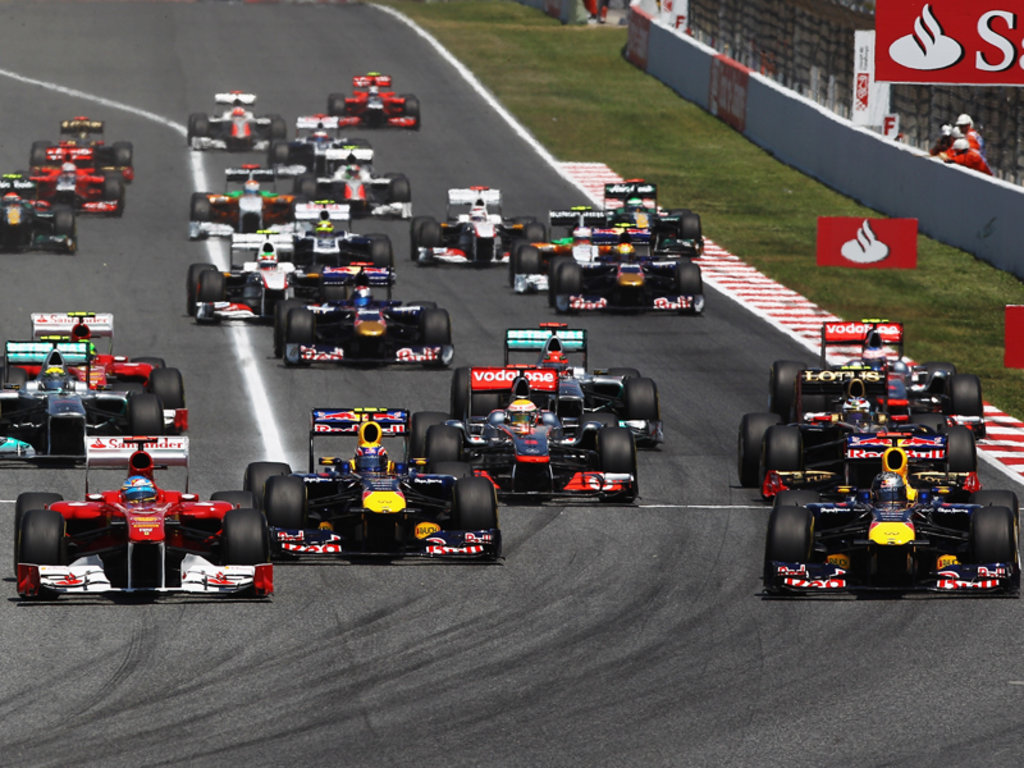 It’s time for F1 teams to strap on their new bits – the GP circus arrives in Europe. And the forecast says it might even rain in Spain…

Expect a lot of ‘baseline checking’ when F1 fires up its engines again in Barcelona this Friday. Having started off the season with the major percentage of testing at Circuit de Catalunya, teams will be keen to see how they’ve progressed in four races, plus the bit of sight-seeing they did in Mugello last week.

How many tenths have they put on the car in the flyaway races – that’s the big question?

Of course Barcelona is where the teams add the serious upgrades, the major revisions to the cars that have been planned since they all launched. Unlike last year when everyone was trending towards a Red Bull design, the Mugello test revealed that this year most teams have adopted the McLaren exhaust configuration.

Will anybody be able to reveal a Double-DRS system as pioneered by Mercedes? It’s unlikely but you never know with McLaren. Certainly Ferrari are under most pressure to show a significant step forward and indeed started running a few of the new components of the modified F2012 at their Tuscan track last week.

Ferrari boss Luca Montezemolo, speaking at the Gilles Villeneuve 30th anniversary memorial, thinks he will get a good idea about the shape of their 2012 season after Barcelona.

“I’ve just spent a long while with our technicians, and they are confident, but we need to see what the others have done,” he said at the event. “What I want is a more competitive car in Spain, and then we can go for it this season. This is what I’ve asked because we have a nice development program beyond Spain.”

However Red Bull Racing’s Christian Horner thinks that Barcelona’s reputation for sorting F1’s true pecking order may have gone out of the window this season. “Usually Barcelona is a pretty good indicator of car performance,” he told Autosport. “If a car works well there it tends to work well in most places. Whether that still applies this year, who knows? I’m sure most teams are bringing upgrades of varying degree for that Barcelona race. It is the first European race so traditionally that’s where teams will introduce new components to their cars and we’re no different to that. It will be fascinating to see the evolution amongst the teams.”

One thing that hasn’t evolved since Bahrain is Michael Schumacher’s frustration with his Pirelli tyres. In Bahrain he was critical of the extreme care you have to take with them to keep them intact and speaking to CNN ahead of the Spanish Grand Prix he hadn’t softened his view. “I just think that they’re playing a much too big effect because they are so peaky and so special that they don’t put our cars or ourselves to the limit. We drive like on raw eggs and I don’t want to stress the tyres at all. Otherwise you just overdo it and you go nowhere.”

At the moment Schumi is in a minority of one in hating the new Pirellis, but that could grow. Kimi loves a grumble and the Finn no longer has a PR filter on what he says. But right now the Lotus is flying and could win races. It will certainly be interesting to see how the Pirellis behave in the cooler conditions of Barcelona (compared to Bahrain).
As I write (Tuesday) we’re predicted 25C on Friday, 23C on Saturday and 19C and possibly some rain in Spain on Sunday. That would please Michael.

What McLaren will be hoping for most of all is neither rain nor shine, but some problem free pitstops. McLaren’s double disaster in Bahrain wasn’t as dramatic as the championship losing pitstop for Ferrari and Felipe Massa in Singapore, when he went trailing off down the pitlane with his refuelling hose still attached, but ultimately they could be the difference between Lewis winning or losing the title.

In a tight season and in a tight race, as Barcelona is likely to be, they could again play a part. There’ll be lots of practice on Friday that’s for sure.

In the past Barcelona races have been a tad on the boring side with 20 of the last 21 winners coming from the front row of the grid. But last year’s race was pretty good and this year there are a lot more wildcards at play. And everyone will be just egging Michael Schumacher on.