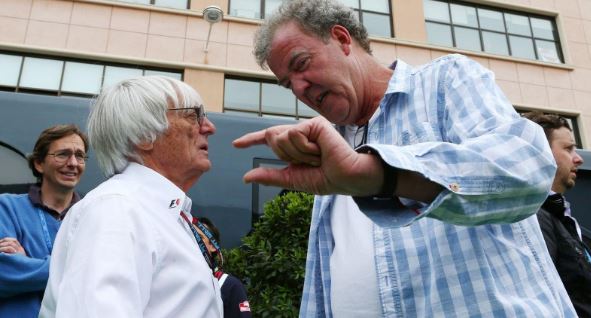 The Formula One world was shocked by the news that Bernie Ecclestone, all-time chief executive of Formula One Group left office. Well, most likely he was nicely (or might not nicely) asked to leave it. Castling in management was due to the change of controlling shareholder. It had subsequently been bought out by Liberty Media. “I officially got sacked. I not just stopped being the head of the company, I’m out of Formula One for good”, Bernie Ecclestone said.

Chase Carey would run the Group as chief executive. Everything would have been fine, but Chase is American. That’s below the belt for patriotic Brits and no less conservative Europeans. Because American a priori cannot lead Formula One. That’s nonsense in the Formula One world! However, there is one British who expressed his support for Chase. And that was no other than Jeremy Clarkson – legendary motoring journalist.

The Top Gear former broadcaster and the author of Grand Tour in his last interview said that Bernie Ecclestone, commercial boss, should have been put into retirement a long time ago. “He’s forgot what the real racing is. It’s not a show for rich retirees. It’s passion!”, said Clarkson.

The Grand Tour broadcaster emphasis that only Americans know how to make a real show and make good money on that. “Check out NASCAR. There are 250k people there to watch the show, and it’s unbelievable! Formula1 could only dream about such success. I’m sure Chase Carey would manage to give live and extreme to today’s Formula One!”

Furthermore, Clarkson hopes that leadership change would help the racing got a second wind and hook the audience all over the world. Recent seasons of Formula 1, when you could guess the winner with complete confidence even before the racing starts, proves Clarkson to be right. Racing has actually lost the kick and become more of competition of mechanics than drivers. However, another American company Amazon is one of the main sponsors of Grand Tour. Who knows, maybe Jeremy just raising his profile in the eyes of sponsors. We want to believe that he won’t do something like this keeping openly and frankly speaking of what he actually thinks.

How Formula One will change?

Probably there won’t be any major changes in the first season as new owners will just look out for the audience. By next year, we can expect some small changes as well as global ones.

Anyway, it’ll be much more interesting to watch sports arbitrage betting situations and surebets. Besides, if you’d like to make money on any kind of sport, especially on Formula One, you only need to sign up for a BetBurger account and search for arbitrage betting situations. Simple interface and fast support will help anyone, even Clarkson and Ecclestone to profit on arbs. And we will continue to keep an eye on the stand-off between these two legends.