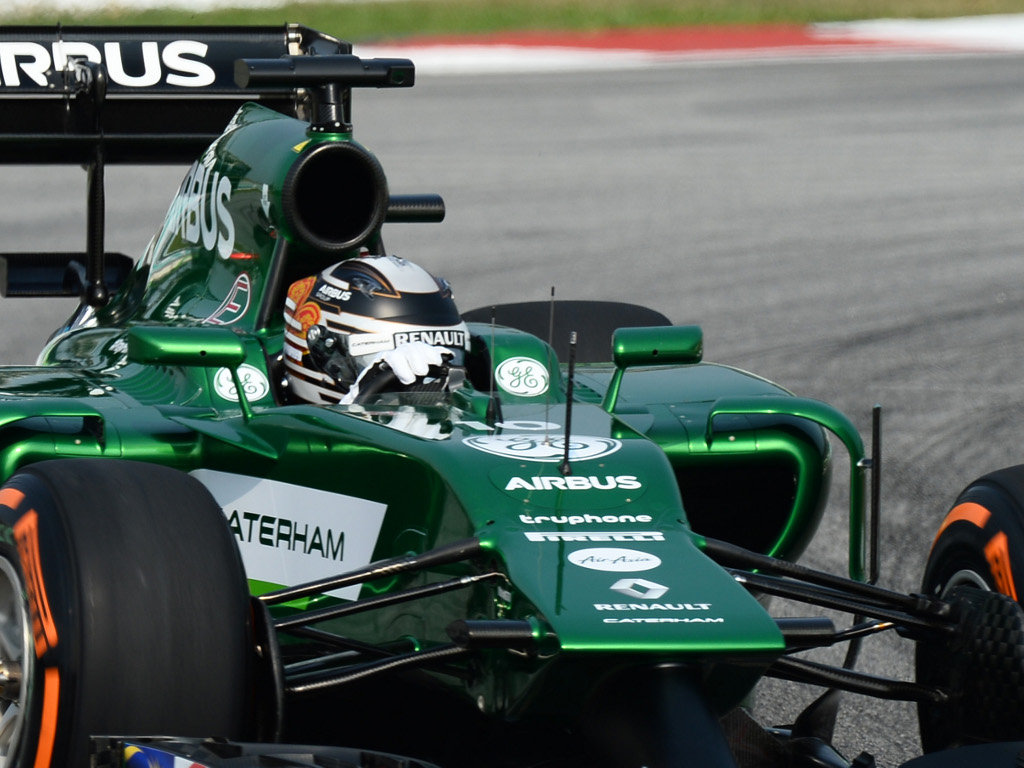 Caterham:
Kamui Kobayashi: “13th in our second race of the season is a very good result for the team, especially after such a bad weekend until the race! I had a great start, and no brake problems this time going into turn one, and by the end of the first lap I was up to 16th, running at the same pace as Sutil just ahead and with the car performing much better than it had all weekend. We were looking at what was going on around us and with the good tyre degradation we had we adapted the strategy and decided to go long on the first stint on options, finally boxing on lap 15, going out again on another set of mediums which were working well right from the first lap of the second stint. I was ahead of Chilton and found really good pace on the new set of tyres and I went after the Saubers ahead and was catching them fast. We stopped for the second time on lap 32 and went onto the primes for the final stint, knowing it would be a long run to the flag but also knowing that if we kept it on the track we could have a good finish, and that’s how it turned out. 13th place in Malaysia puts us back in tenth in the championship and gives everyone the sort of boost we needed. There’s still a huge amount of work to do and a lot of today was new for me – that was the first time I’ve driven the car on full tanks on these tyres and we obviously have to keep putting more performance on the car so we can really fight one or two of the teams ahead. That looks like it’s a realistic target at this stage, but for now, focusing on today, finally we’ve had a good day and we should be happy about that.”

Marcus Ericsson: “First I want to thank the boys in the garage for working so hard to fix my car after yesterday’s accident. I was feeling a bit low last night, but to have finished my first full Grand Prix in 14th, helping us move up into tenth place in the constructors’ championship, is a great feeling, for me and everyone in Caterham.

“My start couldn’t have been much better – I passed both Marussias and was right up with Kamui by the end of lap one in 17th having made up five places. I was quickly into a good rhythm and keeping pace with my teammate but about ten laps into the first stint I started having some issues with the rear grip which was costing me a bit of time. We boxed for the first time on lap 11 but had a problem during the stop and I came out behind Chilton and Vergne. The second stint was really good – to be honest I was a bit surprised that I was fighting Raikkonen but he and Vergne made a couple of moves on me which I was able to defend, and then I went after Chilton. We boxed for another set of new options on lap 26 and I came back out ahead of the Marussia and focused on pulling away from him.

“I stayed ahead of Chilton after the third stop for the primes and from there I just wanted to get the car home. It was all ok until the last couple of laps when I started losing power, and I finished just ahead of the Marussia at the line as he’d been almost able to catch me with the ERS issue, but that 14th place, by 0.1 seconds, is what puts us into tenth so I’m really glad I could hang on. That tiny margin also shows that every single detail counts at this level of competition, and the tiniest advantage can make a big difference.

“It’s been a tough weekend, really tough for everyone, but we’ll head to Bahrain knowing we have something to build on, and something to defend. That’s a big positive and I can’t wait to get back in the car in a few days time and start all over again.”

Marussia:
Max Chilton: “It was a pretty demanding race I have to say. I didn’t get a fantastic start and I knew there was going to be trouble in turn one, which I at least managed to avoid. We had a close battle with Ericsson for much of the race and towards the end we were very close and pushing him all the way to the line, eventually ending up just 0.1s adrift. We are a little disappointed today, but we’ll regroup and focus on what we can do for Bahrain next weekend.”

Jules Bianchi: “Unfortunately the situation with Maldonado was a consequence of what happened off the start, when Vergne hit me from behind and punctured my left rear tyre. Quite simply I could not avoid Maldonado; there was nothing I could do. We came in to change the tyres and to fit a new front wing but when I returned to the track the car was not easy to drive and we suspected a problem with the brakes. We could not continue to drive this way and had no choice but to retire. It was disappointing to end my race after 8 laps and this is not the reward the Team deserves after a week where we seemed to make good progress through the sessions.”

Sauber:
Esteban Gutierrez: “After quite a long stint, I made a pitstop and couldn’t engage first gear. I tried it many times, but it didn’t work, so there was not much I could do. In the end we made a step forward this weekend. Obviously it was not a good race, but we have to keep positive. We must solve our issues so we are consistent and reliable at the track and have no technical problems. We still have a long season ahead and I am confident we can improve.”

Adrian Sutil: “In my last lap I lost power and then suddenly the car switched off. I don’t know what happened, so we need to analyse it. It is a shame. Many things don’t work well at the moment, so we need to learn from that. In general, our pace was too slow and the grip level was poor. This was unusual for us and we didn’t expect that. We will keep working on the issues we have and we will be back stronger for the next races. We don’t have much time until Bahrain, so we don’t expect to have many updates there. However, for the upcoming races we have a plan which we are working on in order to improve.”