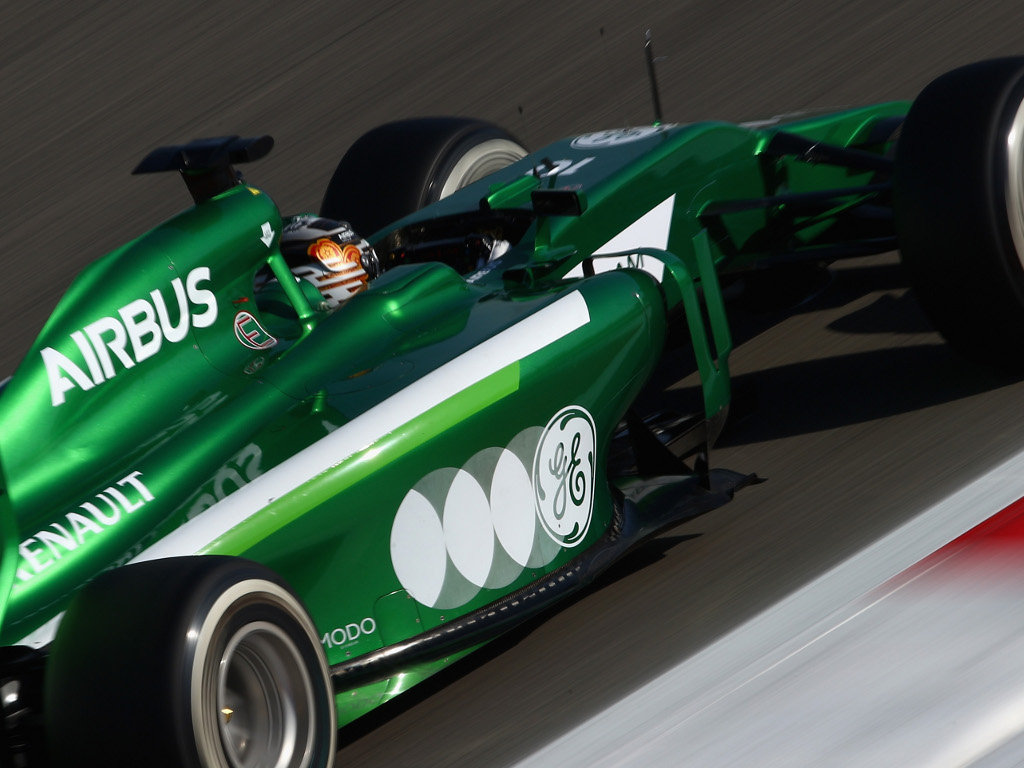 Caterham at least got one up on McLaren and Sauber as one of their drivers, Kamui Kobayashi, actually saw the finish line…

Caterham:
Kamui Kobayashi: ” had an ok start but had an issue on lap one with a setting that gives us full boost and energy release – we sorted that out quickly and I passed Marcus for 18th, then went after Bianchi who I caught and passed on lap 10. My race pace was good in the first stint and the tyre deg was what we’d expected so we stuck to the strategy and boxed for the first time on lap 15 for another set of options. I came out behind Marcus and Chilton but got in front of them both and went after Maldonado in 16th but with the performance level of the car now I wasn’t able to catch him. We were on a two stop strategy so we came in for the mediums on lap 35. I was fighting with Gutierrez but let him go as he was on a different strategy and there wasn’t any point ruining that set of tyres just to race him, but then the safety car came out and I was able to make up the lap and was up with Maldonado and Grosjean just as the safety car came in. After the restart I had to save fuel so couldn’t keep pace with the pack and that was pretty much the end of my race. Finishing 15th isn’t great but we really couldn’t do any more today. We’ll have to regroup for China and with a few updates we have for that race we’ll aim to make progress there.”

Marcus Ericsson: “My start was good and I was up to 17th by the end of lap three, fighting with Grosjean and then went after Bianchi. The car balance really didn’t feel great and Kamui had better pace than me in the first few laps plus my tyre deg wasn’t great so we made our first stop on lap 11 at the same time as Chilton – the guys did a good job and I came back out still ahead of him at the start of the second stint. The car still didn’t feel great on the second set of tyres and I couldn’t hold back the Marussia or Kamui who was on a different strategy to me. I kept pushing up to the second stop on lap 26 when we went onto the third set of options and came out ahead of the Marussia again but then after a few more laps I lost power and was told to stop the car because we had an oil leak. It’s obviously disappointing not to be able to finish the race, especially as the car was feeling much better as the fuel level dropped. Still, for me it’s another part of the learning process and with every lap I’m racing my education continues. Now we have a couple more days of testing in Bahrain and then it’s off to China for another new track for me. We’ll have some new parts there so we’ll work on optimising them with setup and come back fighting in Shanghai.”

McLaren:
Jenson Button: “In terms of pace, we took a step forward this weekend. Moreover, our degradation was positive and I think we did a very good job understanding our tyres. Only one team were demonstrably quicker than us today – Mercedes – but sadly they were a lot quicker than us. Having said that, our long-run pace was very good, especially over the last few laps, so I reckon we could have raced very hard to the finish on the Primes. But unfortunately I didn’t get that opportunity. It’s tough for all the team, because they all worked really well and really hard. We were set for fifth place at worst and a podium finish at best, and that would have been a very positive outcome for all of us. In summary, then, there was lots of good racing out there – I can’t even remember how many cars I overtook but it was quite a lot – and I think it was the same for almost everyone out there. I really enjoyed it, in fact. Formula 1 may have new power units and technical regs this year, but it’s clearly every bit as good as it ever was in terms of on-track spectacle.”

Kevin Magnussen: “That wasn’t a great race for me. The start wasn’t ideal – I lost three positions – and after that we just didn’t have enough pace to make progress towards the front. We’d been expecting that the colder conditions might help us, but, as things panned out, we were actually a little less strong here than we were in Malaysia, for some reason. We’ll analyse that carefully, and I’m sure we’ll learn from it. We’re learning all the time, in fact. It’s disappointing that we didn’t score points today – two DNFs is never pleasant for any team – but we’ll approach the Chinese Grand Prix with the aim of doing quite a bit better than we did here in Bahrain.”

Sauber:
Esteban Gutierrez: “First of all, the most important is that I am ok. They did all the checks at the hospital and everything is fine. Concerning the accident, I was completely surprised that Pastor (Maldonado), who came out of the pits, ran into me. I was clearly in front of him. I turned into the corner and I was suddenly hit and I rolled over. There was nothing much I could do.”

Adrian Sutil: “My race was over quite early. Jules (Bianchi) braked too late and went into my car in the hairpin. I was not able to do anything to prevent it, and my car was damaged. He was driving aggressively or the whole race and pushed me off at the start. With his move he destroyed mine as well as his own race. It was unneccesary. In general, the weekend was difficult for us. However, I wanted to finish the race to cover more kilometres and also to gain experience with the car. The next race in China will come soon, so it can only be better.”