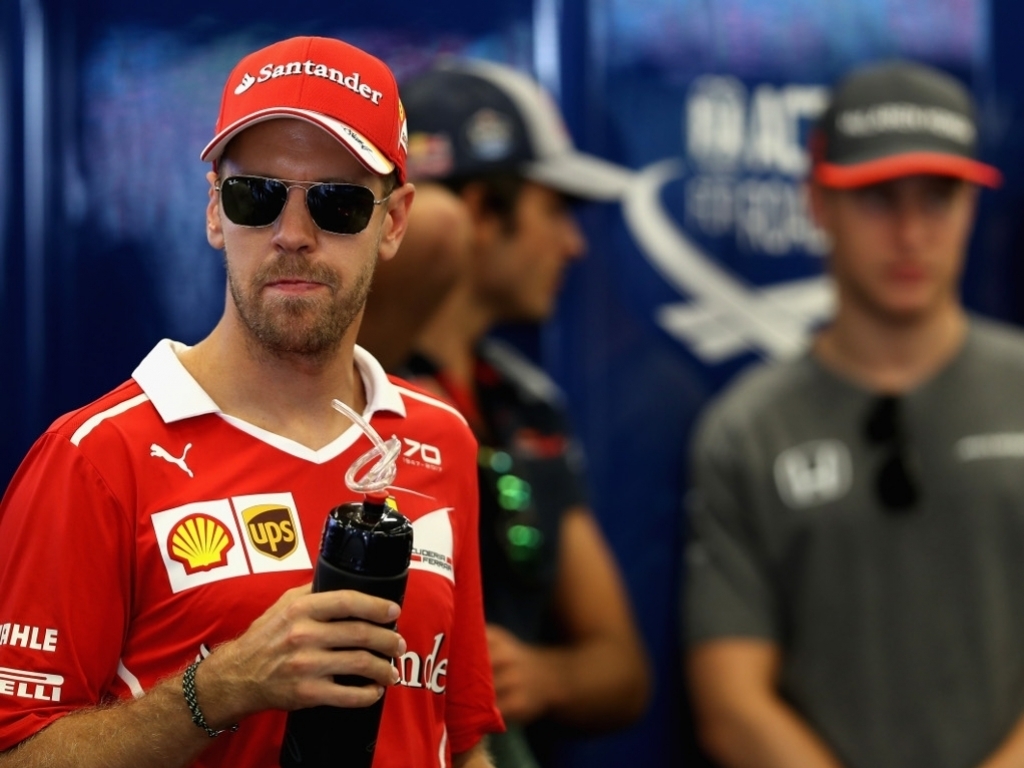 Sebastian Vettel finished fourth after a controversial incident with Lewis Hamilton, while Force India have another dispute to settle.

Sebastian Vettel: “First of all, I think that today the car was very good. The pace was strong in the race. I think you could see that we were losing a bit here and there, but overall it was a good race. It was a very busy start, and Vallteri was very aggressive. As for what happened at the restart from the safety car, I don’t know why I got the penalty and Lewis didn’t. It’s disappointing, because it could have been a better result. I don’t have a problem with Lewis but I just think that what he did on the track was not ok. By now the decision is done but, in an episode like this one, I still think that if you give out a penalty, then it should be to both drivers.”

Kimi Raikkonen: “Today many things happened that were out of our hands and unfortunately we paid a big price. After the start, at the second corner, I got hit by Bottas; I don’t know what he was doing, he braked very early but probably he noticed that and let the brakes off, went too fast and hit me. Because of that the rear end of my car hit the wall and I had a massive damage. We were able to keep going but then I was unlucky. The two Force Indias collided, some debris flew off and destroyed my rear tire. As a consequence my whole floor and the rear wing were damaged and we decided to retire. When the red flag stopped the race we thought that we might try and go back on track. The mechanics did and amazing job, managed to change the floor and the endplate in a very short time. But obviously my car was still not perfect and we decided to stop. It’s not a good day when your car retires twice in a race. I’m disappointed because, without all these things happening, my car would have been good. There’s nothing else we could have done, we tried our best.”

Esteban Ocon: “It’s hard to sum up your feelings after such a busy race. I’m happy with our performance and also disappointed not to realise the potential we had today. It’s never nice to have an incident with your teammate and it was costly for both of us – we both lost a lot of time and positions. Fortunately I could recover, overtake a lot of cars and score some important points for the team. We will discuss things internally and see what happened, but when you are racing close to each other at a restart these things can happen sometimes. Sergio was very deep into turn one at the restart and I went on his inside. He squeezed me between turns one and two, and I was on the inside going into turn two. He was trying to resist on the outside of the corner and we touched. We need to review it together and understand more. For sure it should not happen again in the future.”

Sergio Perez: “It’s a shame to retire from a race like this because I think we would have been in a position to win the race. The team did a great job all weekend and deserved much more than to have a race ruined in these circumstances. I couldn’t do anything to avoid the accident and it’s particularly bad for our team because it ruined the races of both of us on a day in which other teams have scored big points. We will need to discuss the situation within the team and make sure something like this does not happen again. As drivers, we are just part of a much bigger team and we have a responsibility to do our best to bring home a good result, especially considering what would have been possible today. Before the incident, it had been a great race and a strong weekend. My start was very good and I was fighting for second place on merit, but we were really unlucky at the Safety Car restart. Even after the crash, the team did a great job to get the car back together and allow me to resume the race. Even then, the seat broke and the team retired the car on safety grounds. It shows how unlucky this weekend turned out to be.”

Kevin Magnussen: “It was a crazy race with all the Safety Car periods, the red flag – so many things happened. I stayed out of trouble and had a good balance in the car. The car’s been handling well all weekend – there’s just been some issues with brakes and just not being that competitive on this track and the layout not suiting us. To come away with a seventh-place finish is pretty good. We were in P3 at one point and I got a bit excited about that. I had some fun out there. It was a great afternoon.”

Romain Grosjean: No post-race comments were made

Carlos Sainz: “What a crazy race! The start to it was already difficult: when I got to Turn 1 I saw Daniil rejoining the track and I had to quickly avoid crashing into him, which would’ve been a disaster for the team! I span, but it was a sacrifice I had to do. From then onwards, I kept calm, was very patient, and we recovered from last to eighth without making any mistakes. I have to say it was difficult to keep focused with so many things happening: Safety Cars, the red flag… And I can say I’m satisfied with today’s result in the end!”

Daniil Kvyat: “I watched the race with a very heavy heart because there was so much going on and I really wanted to be part of it! It’s extremely disappointing, because I think we could’ve scored good points today. Unfortunately, the car just shut itself off and let us down… Up until the race, the weekend had been perfect and I tried my best but, when things out of my control happen, I can’t do more. I will keep on fighting and working hard; I just need to do my job like I always do and not let days like this get me down.”