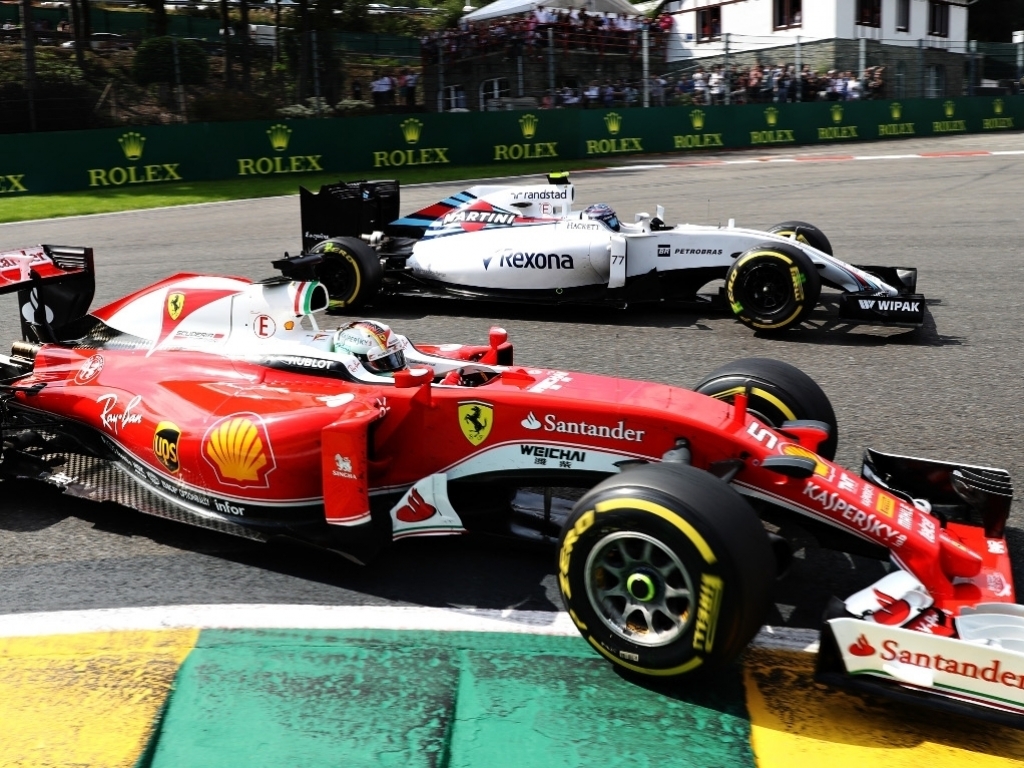 Ferrari:
Sebastian Vettel: “Today I had a brilliant start. I was in second place and half a car ahead, so I could dictate the way. I could hardly see Kimi, he was in my blind spot, with Max even further right and out of sight. So I don’t think what Max was trying to do would have worked. Obviously he didn’t allow Kimi to move into the inside, and that prevented both of them from clearing Turn One in a normal way. We all three touched and collided, and this was bad news for Kimi and for me. Of course, with hindsight, I would have given more room to the inside, but you want to make the corner and try to race, and I gave room to Kimi, but not to three cars. Max had a bad start, he was falling behind. I think we have seen in the last couple of years that if you really dive down the very inside, the track is falling off and you basically go straight. The cars ahead have priority, and this is something he needs to understand. In that regard there was no way he could have made the corner without making contact. I don’t think that me and Kimi have to change what we are doing, we respect each other and it’s a pity when two cars of the same colour collide.”

Kimi Raikkonen: “After the start, at the first corner, Sebastian didn’t see that there was another car on the inside: he expected me to turn but I couldn’t, so I found myself stuck in the middle with nowhere to go. We ended up touching each other and this was pretty bad for the rest of the race. After that it was an uphill battle: the floor of my car was a bit damaged, but we managed to recover some positions and do the best we could, even though it was not easy. I’m fine with fair racing and close battles, but, in my opinion, what happened at Eau Rouge with Verstappen was not correct. I was going full speed and I had to back off before Turn 5 because he just turned in front of me when I tried to overtake him. I’ve never had that with any other driver, if I hadn’t braked hard I would have hit him at full speed and it would have ended up in a massive accident. It’s hard to say where we would have been without the issue at the first corner, but the car felt well throughout the weekend. This was not the result that we were looking for, it’s a pity but that’s how racing goes sometimes.”

Williams:
Valtteri Bottas: “It was a disappointing day and a shame that we wasted the opportunity that we had at the beginning of the race. We were in a great position after the start and when the safety car came in we should have pitted immediately. We then lost many positions. We tried to get the most out the race that we could after that, and I’m happy that we could at least get some points in the end, but overall it was disappointing. Looking ahead, we’ve got another race next week and obviously we need to learn from today. Hopefully we’ll be better in Monza.”

Felipe Massa: “It was a very difficult race. Trying to look after the tyres until the end and checking the tyre pressures while we were racing was tough. It was difficult to stay out long enough on track. When the tyres were there we were fighting for a great position but when the tyres went off we just couldn’t fight anymore.”

McLaren:
Jenson Button: “We looked really good for points today, so it’s disappointing that we didn’t score any, but it happens. I’ve been around long enough to know these things happen. I had a really good start – I got ahead of a Williams, pulled in front of a Red Bull and drew alongside a Force India. But then I lost a lot of places at La Source and ran wide. I rejoined the track, but Pascal [Wehrlein] made contact with me at Turn Five, damaging the rear of my car. There was a lot of damage and we were unable to complete the race. After such a short race, there’s not much more to say!”

Fernando Alonso: “It was an exciting race to drive and I had a good feeling throughout. We had good pace this weekend; we did better than expected on this track; we were in the top 10 with Jenson yesterday in qualifying; and we’ve scored points today. Believe me: a few months ago that would have been unthinkable on a circuit like this. That’s progress – real progress. “And, after all the bad luck we’ve had so far this weekend, we finally got some good luck today. We started last, but we managed to keep away from all the incidents, gain some positions thanks to the Safety Car and then a couple more because of the red flag. We then put on fresh tyres and found ourselves in fourth place – and, better still, we had the pace to manage the situation afterwards. Okay, we couldn’t hold back Lewis [Hamilton], Checo [Perez] or Seb [Vettel], because they were just too fast, but we had enough pace to keep Valtteri [Bottas] behind all the way to the flag. Finally, it’s great news that we overtook Toro Rosso in the Constructors’ World Championship – I think we can be regularly in the points from now on. “So, to sum up, this weekend we saw evidence of very good progress from the team; we’re moving in the right direction, that’s for sure.”