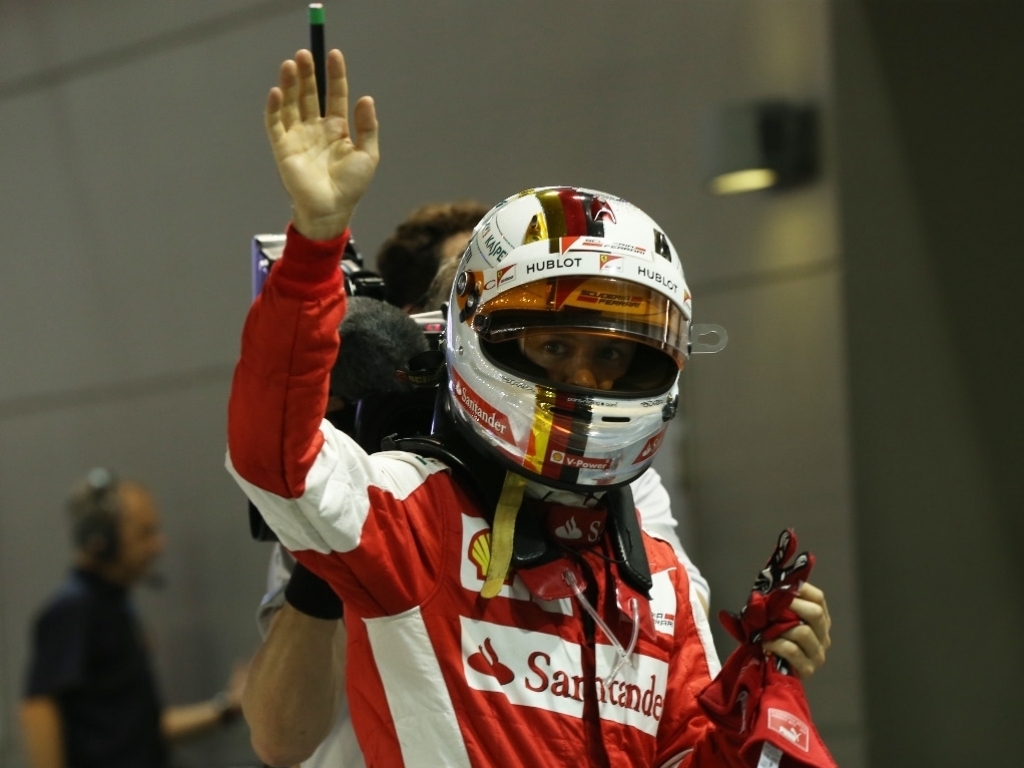 Sebastian Vettel claims his third win of the season for Ferrari with a dominant victory in Singapore while there was no Mercedes on the podium.

Ferrari
Sebastian Vettel: “It was an incredible race today, in fact all in all an incredible weekend and it is difficult for me now to sum it up. The race was intense and long, I had some pressure from Daniel behind me, we were the quickest two cars out there today, but I was able to control the pace and look after the tyres, which ran ok for the whole weeekend. The car felt fantastic, I could control the gap until the end. Today we are in paradise, but we know we’re still a long way to go. It has been a surprise that Mercedes hasn’t been on the pace this weekend, we don’t know why, but to be honest we don’t really care. I am very happy for the team today, there has been a lot of work going in since the day I joined in. For the next races we will keep pushing 100 percent, we’ll give our maximum, like always. As long as there is a chance we have to go for it, we have to do everything we can. Mercedes are the ones to beat, the best way to do it is looking after ourselves and doing the best we can.”

Kimi Raikkonen: “I have mixed feelings: I’m happy to be third, considering how difficult it was yesterday, struggling with the grip and the handling of the car, but I’m a bit disappointed for not having been able to fight for a better position. Today I knew it was not going to be easy: it was a tricky race, on new tires I was able to follow Daniel easily, but then I was starting to have the same problems as yesterday, and I did not have enough speed for trying to catch him. First and third is a great result for the whole team, but of course it could have been better. It’s hard to predict how is going to be in the next races , but I don’t think we should get carried away. Obviously some tracks fit you better that others: we’ll do our best as usual. Hopefully we’ll find out that we can be competitive again fighting at the front. We have done an amazing job as a team so far, we keep improving, building and learning a lot in all areas, we are going in the right direction.”

Red Bull
Daniel Ricciardo: “I think this was our best chance of a win and we got close, so we can be proud of what we did. We have made the most of our opportunities here. At the start Seb just went away and then I was coming back to him and if it hadn’t been for the Safety Car, we’d have got pretty close and maybe an undercut would have been possible at the pit stop. Making both stops under the safety car affected our chances and I think that dictated the race really. In the first stint we were coming on quite strong, with Seb pushing hard to break the DRS gap. But as the laps were ticking down, we were starting to come alive and I was able to lean on the tyres a bit more. Then I was frustrated to see the Safety Car come out, but I knew I still had to make one more stop so I had one more chance. But Seb seemed to have learned from the first stint and started easier than in the first one and was able to pull away later. I was able to close on him again, before we had another Safety Car. That was that really because it’s hard to overtake here. We got the fastest lap right at the end and we can be proud of that. Moving forward, Suzuka is usually a good track for us, although I don’t expect to do as well as there, but we can aim for the top five. It’s good to get another podium, I’m really happy for the team. The last few races the chassis has really come alive so thanks to the guys for that.”

Daniil Kvyat: “I was unlucky with the timing of the Safety Car as I pitted a lap before it came out. It seemed the Safety Cars didn’t like me at all today, it must be something personal! But that’s life. That worked against us and it wasn’t a good race for me, but we couldn’t have done anything else. I lost two places to Mercedes after the first stop and a place to Bottas after the second one. After that, I was always in traffic behind cars that were a tiny bit faster down the straights, which was just enough for me to be unable to pass. On the plus side, we kept it on the track and scored some points. The team did a very good job this weekend and the car worked very well. 8 points is the maximum we could have got with all that bad luck. My time will come. Our car has always worked well in the corners, so our team’s result here is not so surprising.”

Mercedes
Nico Rosberg: “Singapore was a disappointing weekend for my team. We were far off the pace the whole weekend and Lewis’ car had to retire. So I really hope that these were unique circumstances and our car didn’t suit the track and conditions. The problem is that we don’t really understand why Red Bull and Ferrari were so much quicker here. The start of the race was a bit chaotic. In the installation laps my engine went off a few times, so I couldn’t do the same start procedure, which I practised 100 times. I had to adapt but it worked out okay, so I was able to keep the positions. P4 was the maximum today, so we have a lot of work to do for Suzuka to understand what went wrong.”

Lewis Hamilton: “The race was going very well. For me it felt like I was driving at my best in the race. I think I had the pace to win. I did everything. I was on the prime keeping up easily with the guys at the front on the option. My pace was really good when I started to lose power. I felt like the team was working as hard as they could and these kinds of things just happen. It’s unfortunate for the team as I was feeling real good out there, so optimistic. But it was better to retire and save the engine. We will work really hard on figuring out what it was but I am not worried about losing this engine. Our reliability is really high as we had an amazing season so far. It’s still a long way to go and I know I lost some points today, but I was fast and on form and I will make sure I bring that out to Suzuka to fight back!”