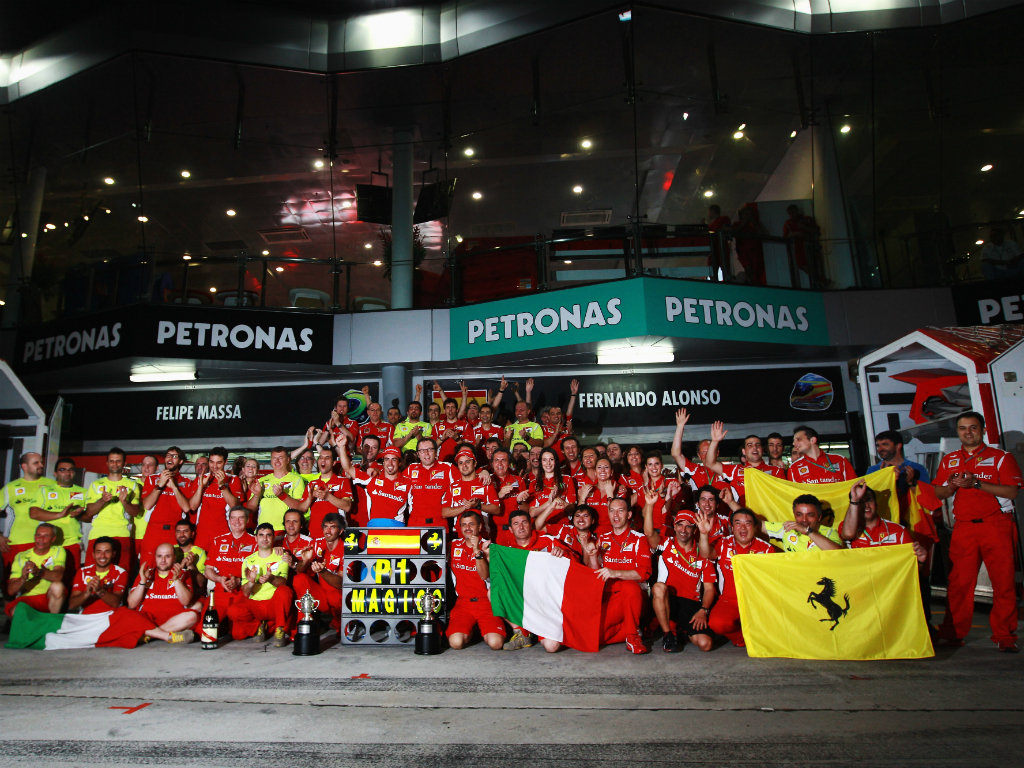 Ferrari:
Fernando Alonso: “It was an incredible race! I am very happy, for me and for the whole team: I am proud of this fantastic group of people. While we have been going through this difficult time, no one gave up, in fact everyone has doubled their efforts to try and catch up. The strategy was perfect, the mechanics did an impeccable job, the engineers did their best in preparing the car and I drove at my maximum for all 56 laps of the race. I would never have bet on this win and I would think anyone who did so must have picked up a tidy sum! As I returned to the pit lane on the cool down lap I didn’t even know where to park the car: to win with all the problems we have got is something quite extraordinary. In the wet, I was going very well, but then when the track dried out, our weaknesses showed themselves. Sergio got very close and I was trying to stay on the only dry line: if he wanted to pass me, he would have had to take a risk. Yesterday, he and I ended up ninth and tenth and today we found ourselves fighting for the win, which shows how unpredictable is this championship. Our aim was damage limitation for these early races of the championship and now we even find ourselves leading the classification. Now we absolutely have to improve the performance starting right away with the races in China and Bahrain. We must get back to work immediately so as to find at least the two or three tenths that could put us back in the fight for the top places.”

Felipe Massa: “First of all, I want to congratulate Fernando on this great win, which came thanks to him driving a fantastic race. It is a very important victory for the team, although it must not let us forget that our car is not yet at the level of the best. Obviously I am disappointed with my result. Things were going well at the start and I was able to fight with the drivers directly ahead of me. When the track was drying, I suffered more and more with tyre degradation and I could not maintain a good pace. We opted to follow what Rosberg was doing ahead of me, as he too was apparently struggling with his tyres, but it did not work out and we lost a lot of time with this extra stop, given also that the others stayed on track for around a dozen laps more before switching to the dry tyres. It is important for us to try and understand why there is such a strong difference in the way our cars perform, but ultimately, our aim is to have a more competitive car in as short a time as possible.”

Sauber:
Sergio Perez: “It is a great day for me. The team did a very good job and I feel very happy for them. It is a really nice feeling to have been on the podium here, but I think victory was also within reach. Twice in the race I was catching Fernando (Alonso). On the final stint, when I was on the hard tyre compound, my tyres had degraded quite a lot. It wasn’t easy and I went wide and touched a curb. I actually was lucky not to go off. Before that Fernando had just pitted on the perfect lap for dry tyres, just one lap before me, and I lost a bit of ground to him. It was very difficult to make the right calls today and I want to thank my team. They always called me in at the right time, the first stop after lap one was especially important and it was also good to take the hard compound in the end, as the medium compound was not working too well for us. It is only our second race in 2012 and I think we have a great season ahead of us. I knew we had potential to fight today, our car is not far away from the top cars and a good crew and a driver can also make a difference in such conditions.”

Kamui Kobayashi: “It is great for our team to have scored so well today, but for me personally, of course, it was a very disappointing race. Technically I struggled with the brakes and that was then also why I had to give up after 47 laps. Besides that for me the strategy didn’t work out, which, of course, is always easy to realise in hindsight. I had a good start but then it was a long time before I changed from intermediates to rain tyres. It was not easy to keep the car on track, and almost as soon as I had changed the red flag came out. But nobody can know this in advance. Later in the race then it was the other way round. I would have loved to get dry tyres, but we were expecting more rain so, again, I could not get rid of the intermediate tyres.”

McLaren:
Lewis Hamilton: “This was a tough but fascinating race – firstly, I want to offer my congratulations to Fernando [Alonso] and Sergio [Perez] – they both drove great races and did a fantastic job. It was pretty eventful race: it was difficult trying to judge the best time to change from Extreme Wets to Intermediates, and we were probably a little late on that – but that’s how it goes sometimes. Today wasn’t perfect – making the call for slicks is always a risk, and the others went a bit earlier than us. In general, we lost some time in the pitstops and I was pushed out of the fight somewhat. But, all in all, it’s been a positive weekend and I’m not too frustrated. My aim for this season was always to be consistent – I did it in 2007 so I’m trying to repeat that! A big thanks to Lucozade for doing such a great job with the new race hydration formulations this weekend – they’ve really made a difference in such a hot and humid climate. For me, the next races will be all about converting our really strong qualifying pace into equally strong race pace – that’s what I’ll be working in the few weeks ahead of the Chinese Grand Prix.”

Jenson Button: “Today was a pretty difficult day; pretty much everything that could have gone wrong in the race did go wrong. And that’s just one of those things – a lot of my issues were brought on when I wiped my front wing off at the start: I locked up the rears, couldn’t slow the car down and hit Karthikeyan, which was a bit frustrating. So I had to pit for a new nose, and that was pretty much it. And it’s always going to be tough when you’re down in 14th or 15th position. All the cars were so close and it was difficult to overtake, too. That made it very difficult. Big congratulation to Fernando, Sergio and Lewis, who scored more good points for the team – but it just wasn’t a good day for me today. The amazing thing is that I’m still third in the championship after not scoring any points! This wasn’t really the result I wanted – but, hey, chin up: we’ll move forwards and hopefully have a much better weekend in China!”

Red Bull:
Mark Webber: “It was busy with a lot of calls going on at the re-start and with the tyres. My stint on the intermediates after the red flag was tricky and I didn’t have much confidence. When I went onto the dry tyres, I felt much more confident, but it was a little bit too late