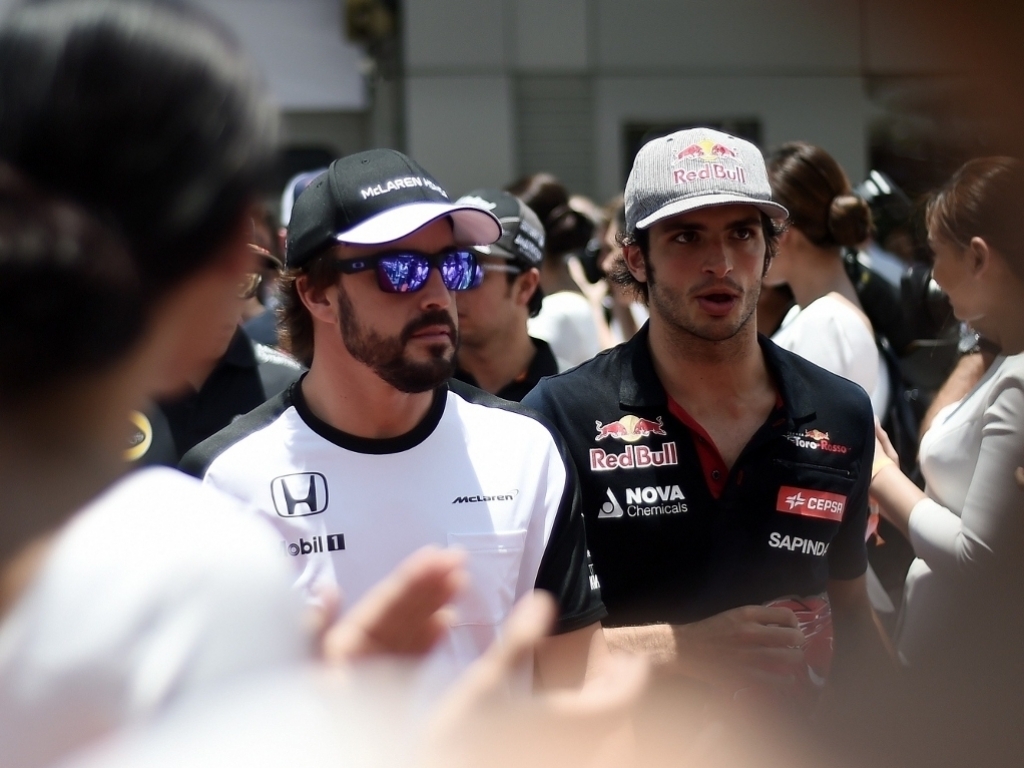 Roberto Merhi managed to see the chequered flag for Manor while both Jenson Button and Fernando Alonso retired for McLaren.

Force India:
Sergio Perez: "We knew ahead of the race it would be a big fight to get close to the points and it turned out to be just the case. I struggled with degradation in my first stint, on mediums, and that cost me a lot of time after the Safety Car. We had slightly better pace with the hard compound, but in the end it was not enough to get back in contention. The penalty didn't help us either; I felt I had nowhere to go and couldn't avoid contact with Romain. I thought it was a racing incident but it ended up costing us a lot. It's a disappointing result but at least we were able to learn a lot from this race and this will help us going forward."

Nico Hulkenberg: "It was a tough afternoon and I was always kept very busy with lots going on around me. I was really struggling with the general balance and the car was sliding around, especially as the tyres became older. We chose not to pit during the early safety car, which gave me good track position, but it was not an easy decision. We were trying to make the two-stop strategy work, but it just wasn’t possible with the degradation and so we switched to three stops. Perhaps it would have been better to commit to the three-stop earlier, but I’m not sure it would have changed the result that much. The penalty for the contact with Daniil [Kvyat] also dropped me out of the fight for points. I went a bit wide in turn one and chose to go back on the inside going into turn two. I was quite well alongside him, but he probably didn’t think I would try to come back at him."

Manor:
Roberto Merhi: "I’m so happy for the team. P15 is not only a great result from today’s race, but also a huge reward for a fantastic effort over the past few months. I’m really proud of us. Coming into the weekend we knew things would not be easy; we had to work very hard and stay focused every step of the way. We missed out on some of our targets but in the end it was the race that mattered and we brought the car home with a full race distance. That was my main objective, as the information we now have is so important for our development, but it’s good to know that we got a good result along the way and finished ahead of some of the other teams. I’m sorry for Will that he was unable to race today but we have a very good starting point for us both to work from in China and beyond. My thanks to the whole team for a really positive weekend."

Will Stevens: "Obviously I’m disappointed that I wasn’t able to race today. We pushed as hard as possible all weekend and there are quite a few positives that I can take away from Malaysia, including the promising pace in free practice. We’ll work on that for China, but for now my congratulations to the whole team on completing our first race distance. It’s a fantastic reward for all the hard work of the last few months."

McLaren:
Jenson Button: "The start of the race was a bit of a mess for me: I’d had a longer-than-normal pit-stop under the Safety Car, and came out behind Roberto [Mehri], who didn’t close down the gap before the Safety Car came in. At the restart, I then started about four or five seconds behind the pack, had to get past him, then chased down the cars in front – which hurt my tyres. But I enjoyed it out there – we’re actually racing people. To be able to see one of the Red Bulls ahead of me – and so far into the race – was obviously a nice surprise. And we were able to mix it with the others a little bit more, too. Fighting in the pack is the most positive thing to take away from this weekend – hopefully, before too long, we can start to pick them off on a race-by-race basis. Today has been a useful day; it’s just a pity that both Fernando and I ended up finishing it early."

Fernando Alonso: "This whole weekend has been better than I expected. The main positive to take away from today is the fact that we were able to run with other cars – Jenson and I weren’t simply fighting with each other. That was the first step we needed to take, and we’ve taken it already. Indeed, our race pace was surprisingly good; I was running with the pack, and I was even able to catch the Red Bulls before the pit-stops. That was a nice surprise. We still need a little more time to investigate the exact cause of my retirement. The team came over the radio to tell me to back off a little, to save the car, so I brought it back to the pits. For us, these are the sort of reliability problems you’d usually discover in pre-season testing, but, given our lack of running over the winter, unfortunately we’re likely to encounter such issues in the first few races of the year. Hopefully, we can take another step forward in China."