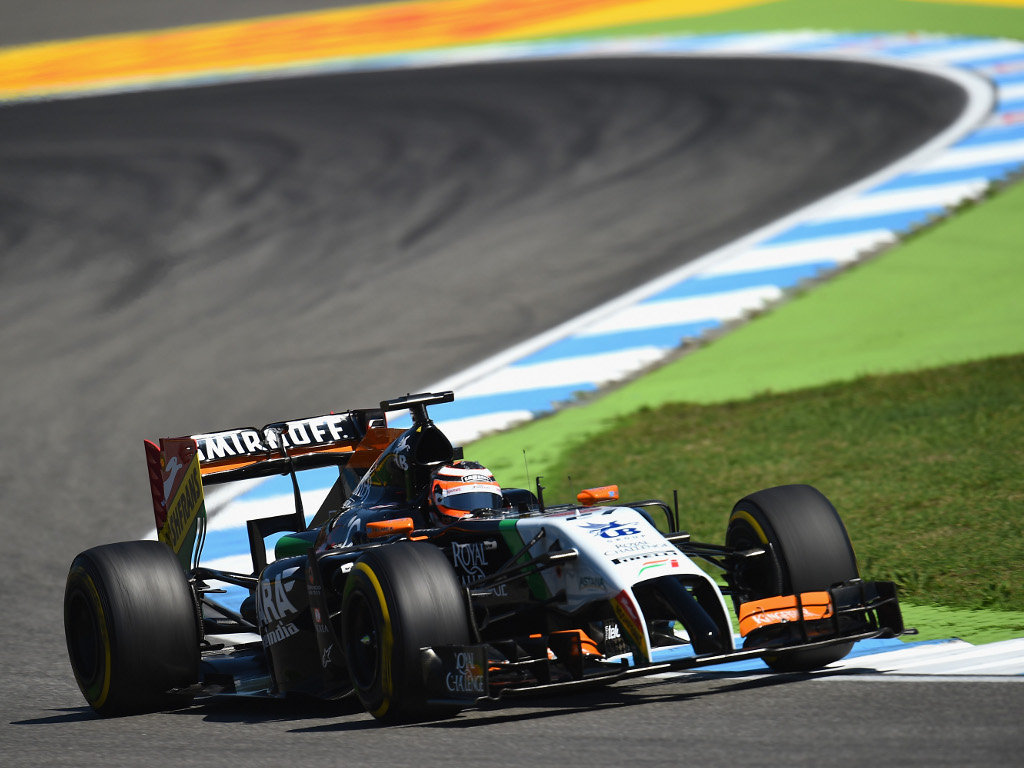 There were points in the German Grand Prix for Nico Hulkenberg, Jenson Button, Kevin Magnussen and Sergio Perez…

Force India:
Nico Hulkenberg: “It was a difficult race and different to what we expected, mainly due to the lower temperatures with the track being 20 degrees cooler than on Friday. We were expecting a lot of rear degradation, but after a couple of laps it became clear the fronts were the limiting tyres, and that changed the game. It was a pretty challenging afternoon and, considering how the car felt, I think we got the maximum from the race. I also had to overcome some engine issues in the middle of the race because there were some hesitations and it was not driving smoothly. It was a good recovery by the team to solve the issue. It was important to score more points and from that point of view I’m feeling satisfied.”

Sergio Perez: “I was hoping for more at the start of the race, but I couldn’t make my tyres last as we usually do and I therefore struggled with the balance for most of the day. It was a very strange race; the track changed a lot compared to Friday and it was the front tyres that were suffering from degradation and not the rears. Together with the much lower temperatures, it made the car very difficult to drive. These things considered, to come away with a point was a good result in the end, but we we’ll need to achieve more at the races coming up to keep fighting in the championship.”

McLaren:
Jenson Button: “I got a good start – I was running as high as sixth in the early stages – so things were looking okay. But I think we got the strategy wrong when we made our second stop. I’m not sure why we stopped so early, but it made it extremely difficult for me to keep the set of tyres alive until the end of the race, which was the plan at that point. The strategy didn’t work out for us, which was a shame, but we’ll learn some useful lessons from it. When I felt the hit from Lewis [Hamilton, on lap 30], I was a bit surprised. A lot of drivers take a wider entry line into Turn Six in order to get a better exit – perhaps Lewis expected me to let him past, but why would I let anybody through? We were racing. We expected more from today.”

Kevin Magnussen: “A real pity: I think I could’ve had a decent race if I hadn’t had the accident at Turn One. I need to see a replay of the accident, but I feel that, if I’d had somewhere to go, then there wouldn’t have been contact with Felipe. I did my best to try and avoid the accident, but there wasn’t much else I could do. I spun after that, and had to box to change tyres and the nosebox. Then I spent the first half of the race coming through from the back of the field. Really, it wasn’t the best thing that could happen. Still, there are some positives from today – the car behaved extremely well; the rear tyres held on – which is something new for this car, it’s usually a bigger problem to keep the rears alive, but today it was okay. I’m happy to come away with some points, but I’m disappointed because we should have scored more. I hope we can be on the pace and get a decent result in Hungary next week.”

Lotus F1:
Pastor Maldonado: “It was a tough race from the beginning; the incident in turn one was quite tricky to avoid but then the pace looked consistent. I did my best to manage the tyre degradation, which was quite high, and we were able to do only two stops. Today’s lower temperature helped us there as well. The initial plan included three stops but we had a competitive first stint so we went for plan B which worked well for us today.”

Romain Grosjean: “We didn’t have an easy start with the soft tyres and I struggled to warm them up after the safety car too, but our overall pace was quite good today. I suffered from a loss of power due to an issue with our cooling system so was asked to switch off the car. It’s such a shame as we were on a different strategy from our rivals so we looked like we could be on course for scoring points. Sometimes that’s how it goes in motor racing.”

Toro Rosso:
Jean-Eric Vergne: “I was having a good race until the moment in which I had to make a five seconds stop-and-go penalty during my second pit stop, which compromised any possibility of scoring points. After it, I came back to the track on the option tyres, which are very fragile in traffic conditions. Very soon my front left was too damaged and I was forced to stop again for prime tyres to finish the race. I think points were possible here, the race was looking great so it’s been a real shame.”

Daniil Kvyat: “It’s a shame how my race ended today, especially because yesterday went very well. My first stint was looking okay until the contact with Perez, which made me lose ground. I think I didn’t look after my tyres well enough during the second stint, in which I tried to catch up and get back some positions. The final stint was looking good in terms of pace, but I suddenly lost drive and I then saw smoke and later flames in the mirrors. I started to feel really hot in the car, so I parked it and jumped out as quickly as possible. It’s not a nice situation to be in, but I’m now more concerned about the car than anything else. I hope everything will be ok and I will now switch my focus to Hungary, where I hope we can do better.”