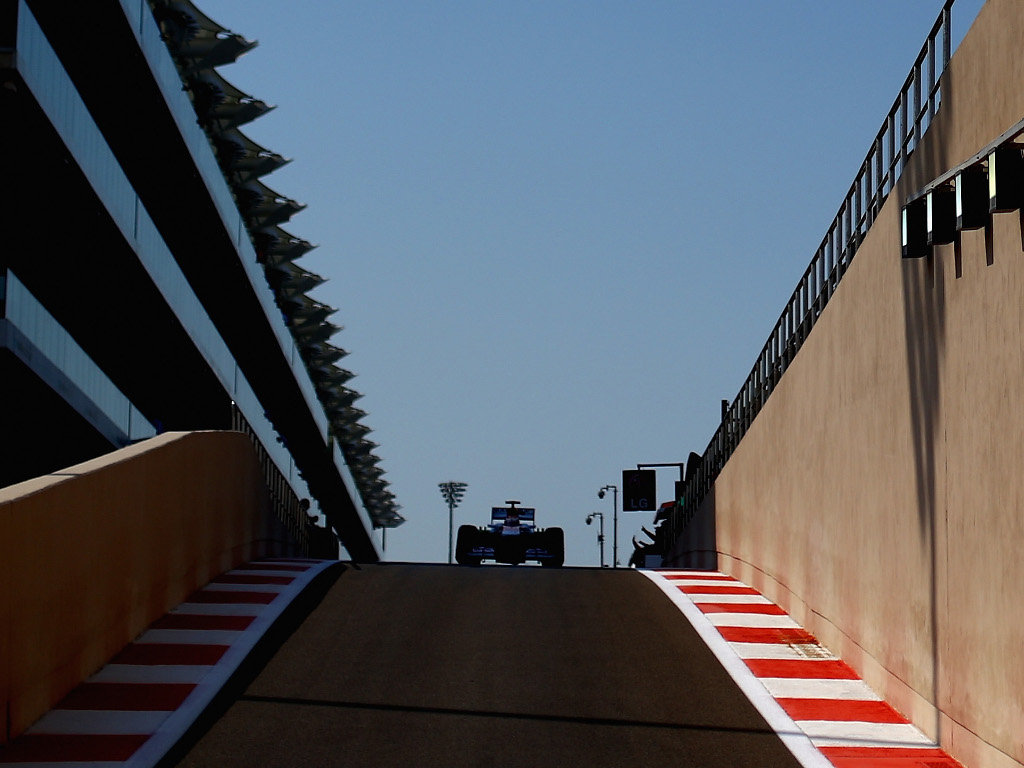 There were points in the Abu Dhabi GP for both Force India drivers, Paul di Resta and Adrian Sutil, as well as Sergio Perez…

There were points in the Abu Dhabi GP for both Force India drivers, Paul di Resta and Adrian Sutil, as well as Sergio Perez…

Force India:
Paul di Resta: “It’s a great feeling to finish sixth and make the one-stop strategy work. I said yesterday that we had opted to set
the car up more for the race and it really paid off today. There were times when we had to be very quick and times when we had to manage the pace and look after the tyres. Towards the end of the race I was battling with Fernando and Lewis, but it was impossible to hold Fernando back because he was on much fresher soft tyres. Lewis was on the mediums so I just focussed on getting clean exits from the hairpin and the chicane leading onto the long straights, and was able to stay ahead. The eight points are just what we needed and everybody in the team deserves credit for the big effort that has gone in this week. That’s two strong weekends in a row and we will move to Austin determined to keep up the momentum.”

Adrian Sutil: “Considering that I started in P17 I have to be quite satisfied about scoring a point and I’m happy about the team result today. It’s not been an easy weekend with the problems I had during practice and qualifying, but the strategy today was the right one and we came away with a point. I was running in ninth until the last lap ahead of Perez, but by that time I had done 27 laps on the soft tyres and it was very hard to defend because I had no traction out of the slow speed corners. The points scored in the last two races have been very important for the championship position.”

McLaren:
Sergio Perez: “This was a very complicated race – and harder than we’d expected. I struggled a little on my first set of Prime tyres, and I’m not too sure why. We had bad rear tyre degradation and poor traction overall. We’d opted to run with minimal downforce in the hope of being able to pass other cars in the race. But, despite that, in the event I found it difficult to overtake, and the fact that I spent a lot of the race stuck in traffic therefore made things very difficult. Still, it was a positive to be able to take ninth position from Adrian [Sutil] on the very last lap – one more point for the team may not sound much but it’s always helpful. The next race is in Austin [Texas, USA]. I can’t wait to go racing again so close to my home [Mexico], and to see the people who’ve supported me so well during this difficult season.”

Jenson Button: “You make your own luck when you start down in 12th – where first-lap congestion is inevitable – and, sure enough, there was a little bit of argy-bargy into Turn One. I duly locked-up both my front tyres, couldn’t slow the car down sufficiently, and drove into the back of Paul [di Resta], which broke my front-wing end-plate. It’s a real pity to keep on having first-lap incidents, especially when the car is working reasonably well now. I’ve been in a similar situation for the past two races, and things haven’t really gone my way. Still, I managed 44 laps on the Prime – and, in terms of getting the most out of what we had, that felt positive. So, all in all, given how far behind we were after lap two [when he made his unscheduled early pit-stop], to finish so close to 10th by the chequer wasn’t so bad.”

Williams:
Pastor Maldonado: “Today was a very tough race from the perspective of trying to manage the tyres, but we managed to cope with it pretty well. I certainly feel that the pace and consistency of the car has improved with the new aero package we ran this weekend and I could feel that the car was improving as the race went on. Unfortunately I came out in to traffic after my second pitstop, which meant that I couldn’t really show the improved pace we had, and in the end I had to settle for a finish just outside the points. Overall the weekend has seen some positive steps forward which will give us a boost for the next race.”

Valtteri Bottas: “I don’t think P15 was really reflective of the pace we had today. My race was compromised by the first lap when I was jumped by the Caterhams who started on the option tyres and so had more grip and were able to overtake me. After the prime tyres started to work my race pace was very good and I was able to fight hard with the cars around me. The positive from this weekend is that the car is feeling better and we have definitely made some gains which is promising for the final two races.”

Sauber:
Esteban Gutierrez: “Obviously we were looking for a better result this weekend, so we can not be happy. The pace is there, but qualifying yesterday affected the race today. Our strategy today wasn’t ideal either. I still had some good fights going on today, which I enjoyed, so I will take those positives with me and look forward to Austin.”

Nico Hulkenberg: “I’m not quite sure what happened today. I had felt comfortable with the car all weekend, but from lap one I was struggling with it. All the balance and the confidence I had was gone today, and I don’t know why. I had a lot of understeer in the first two stints. I couldn’t really rotate the car, which cost a lot of lap time. Then the unsafe release during my second pit stop, which resulted in a drive through penalty, was also quite costly. Now we have to evaluate as to why the car was so different today. It is disappointing, because there was a realistic chance for points today.”