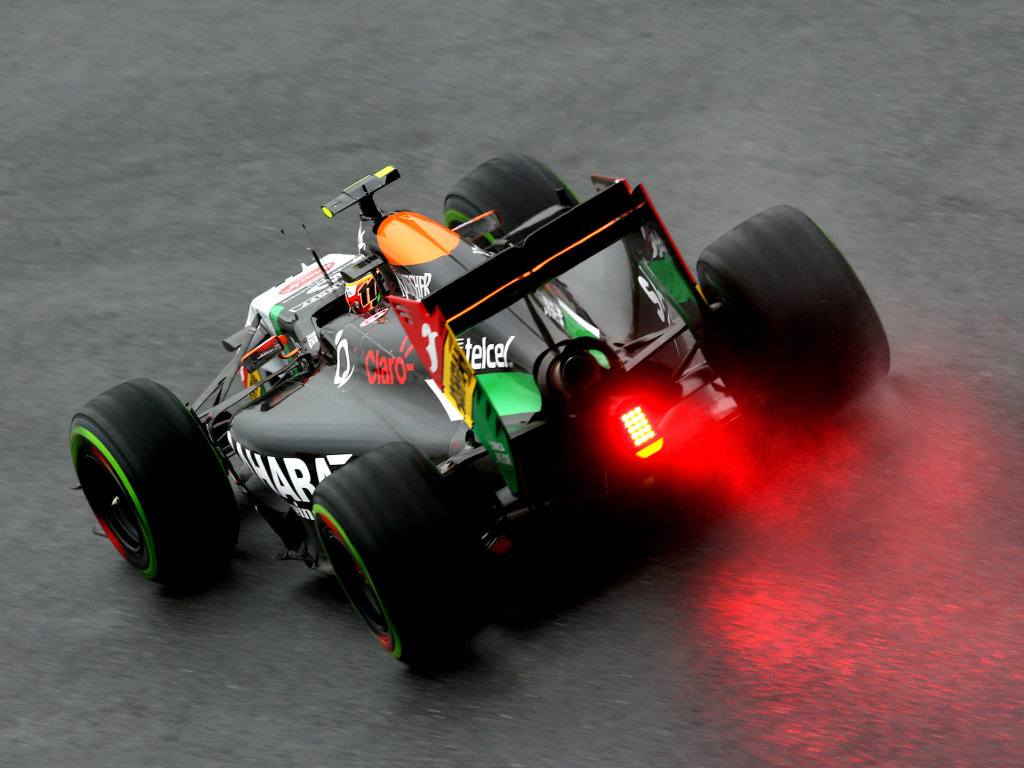 Force India:
Nico Hulkenberg: “Up until the final laps my race was going pretty well: I had good pace and a good feeling with the car. We made some progress early on, pitted late and we were able to jump a few cars in the first stop. I can’t say it was a very eventful afternoon for me; I was on my own for most of the time. The conditions were pretty difficult right from the start: visibility was pretty poor, even if you were in the first half of the pack. It was probably the same for everyone because it’s always a challenge in the wet. When the final safety car came out we decided to pit again as I had already been out on those tyres for a long time and I needed new rubber to finish the race. I am happy to get points after a difficult Saturday; we made up for it today. Suzuka is a difficult track to race on in the wet because there are lots of places where you can aquaplane and have a moment. I didn’t see what happened in the accident that ended the race, but I hope Jules is OK.”

Sergio Perez: “The conditions were very difficult today. When we started the race I could not even see the car ahead of me. To begin with, it was just a race to avoid aquaplaning and trying to keep the car on the track because the visibility was very poor. Our strategy was working quite well, but I think we were unlucky to make our final stop, which dropped me down a couple of positions. Like everybody my thoughts are with Jules and I hope we hear some good news soon.”

Toro Rosso:
Jean-Eric Vergne: “I was very happy about my race until I was informed about Jules’ accident. Getting some news about him is all that matters at the moment. As for myself, starting from the back of the grid and ending up in the points at the end is a great achievement. Today, in such racing conditions, it was really difficult not to make mistakes, while driving as fast as possible, trying to be quick, but I believe that myself and the team did an excellent job.”

Daniil Kvyat: “The only important thing this evening is that I hope Bianchi will be ok. It was a tricky race today with the rain. The general performance of the car was good, but unfortunately our strategy didn’t quite work out and with the safety car and red flag towards the end of the race, my chances for a points finish were gone.”

Ferrari:
Kimi Raikkonen: “Overall, this was a very disappointing weekend. I had set-up problems right from the first day and again today in the race I didn’t manage to drive the way I would have liked. After the start behind the Safety Car, the track conditions were pretty atrocious and visibility was very poor, but my car was handling okay. Then, when the rain eased, I fitted the Intermediate tyres, but after a few laps, they were no longer up to temperature and they began to give me problems at the front end, which meant I had to slow down. Now, we will try and resolve this problem as quickly as possible and aim to improve, starting with the very next race, but more importantly right now, let’s hope we get some good news about Jules Bianchi soon.”

Fernando Alonso: “It was a real shame losing the opportunity to take part in this race because, with nothing to lose in terms of the championship, I could have taken a few more risks and maybe aimed for the podium. I still don’t know what caused the unfortunate technical problem, only that suddenly, the car lost all its electrics, maybe down to a short circuit caused by the rain. Now, in the four remaining races, the priority is still to pick up as many points as possible, because we are still aiming for third place in the Constructors’ classification. On that front, it could be good that we can count on using this engine which did hardly any distance today, thus not having to use a new one which would mean starting one of the remaining races from the pit lane. However, the only good news we want right now relates to Jules Bianchi. I hope that we hear very soon that he’s alright.”

Sauber:
Esteban Gutierrez: “I think it was the right decision to stop the race. I really hope that Jules (Bianchi) will be ok. Regarding my race, I fought all the way from the beginning to the end. The conditions were very challenging and it was difficult to get into the rhythm straight away.”

Adrian Sutil: “My thoughts are with Jules who went off in the same place as I did. Everything else is irrelevant at this point in time. Everybody in the paddock should think of him, and I hope that he is in good hands. It was a difficult race in difficult conditions.”