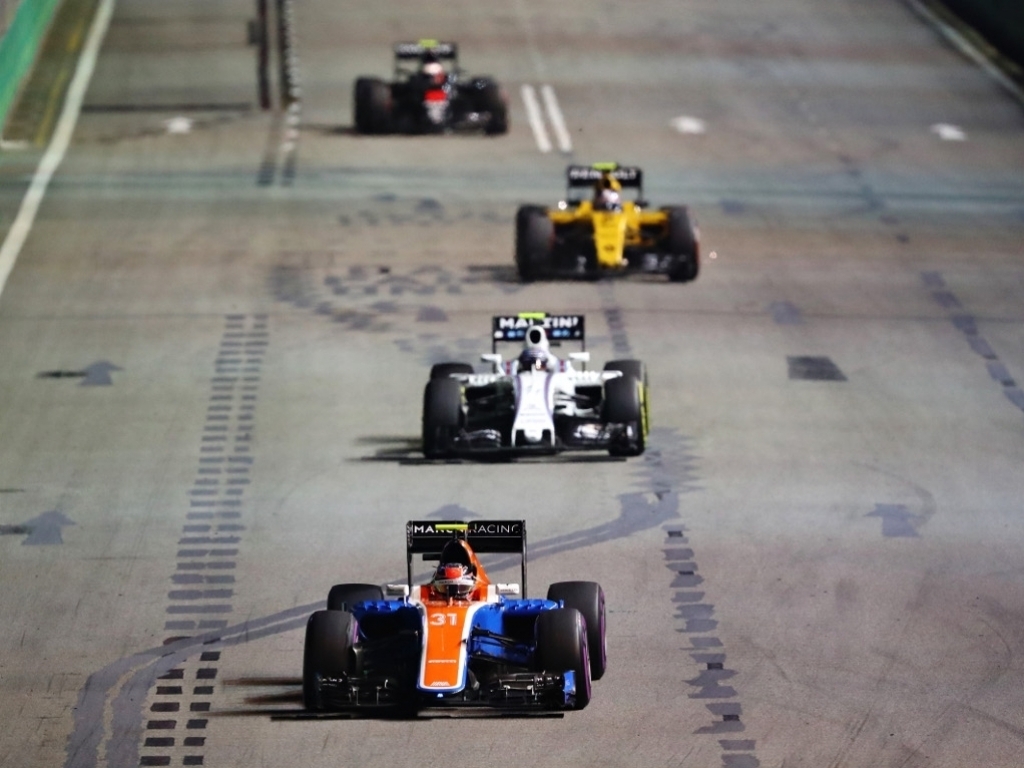 Retirements to both Romain Grosjean and Valtteri Bottas summed up a disappointing evening for Haas and Williams.

Haas:
Esteban Gutierrez: “It wasn’t an easy race, but I think the whole weekend we were pretty consistent. It’s this consistency that’s helping us to understand and work on the details and really try to improve. I lost a bit of time at the start and to recover that on track was pretty difficult. Trying to push the tires, I overheated them and they started to drop off at the end of the stint. However, we ended 11th, so close to the points again. We just need to keep optimistic and push forward. I’m proud of the crew. They’ve worked really well together. Although it hasn’t been a simple one this weekend, I believe that Malaysia will be better and we’ll have a better understanding of the car, which will help us attack the front.”

Romain Grosjean: “There’s not much to say, honestly. I lost the brake-by-wire and we couldn’t race like that. I don’t know what happened. I feel so bad for the guys. They gave their best in very tough conditions. It’s hard on everyone. From FP1 it was always going to be hard, missing the session. We now just have to work away to get to Malaysia, get the best setup, right updates, see where everything is working, and hope for a steadier weekend. I love the race here in Singapore and I love the challenge, but this weekend was just not ours.”

Williams:
Felipe Massa: “It was definitely a tough race. I’m not happy with everything that happened. The race was going well in the beginning, but with the strategy and being stuck in traffic things changed a little bit. Anyway, that’s the way it was. We now need to concentrate on the next race and try to score more points with both cars because today it wasn’t good.”

Valtteri Bottas: “It was really bad today. It all went wrong before Turn 1. Someone touched my rear and I got a puncture, so we came into the pits. We went back out again but we saw that there was some damage on the car, so the pace was really poor. The car was sliding a lot and we didn’t really have the speed. We tried to do everything that we could but then had a mechanical problem so we had to retire.”

Sauber:
Felipe Nasr: “It was a challenging race. At the start we were a bit unlucky, as one car crashed into the barriers on the side of the grid I started from. I lost two positions because of this incident. Finishing the race in P13 was a good recovery keeping in mind that I started from P16. Overall, the two-stop-strategy paid off, and I think this result was the maximum today. Now I am looking forward to the upcoming race in Malaysia.”

Marcus Ericsson: “It is obviously a disappointing result after starting the race from P14. The start was ok; then I was able to move up into P11 before the safety car came out. After the re-start I had a decent pace and was able to attack. Then we took a gamble on the strategy-side and went to three stops, which in the end did not work out. During my second stint I got stuck in traffic and, therefore, lost time. Now we need to look into it and bounce back in Malaysia.”

Manor:
Esteban Ocon: “It was not the best. Pretty difficult, in fact. At the start I managed to avoid the debris that came from the incident involving Hulkenberg, but after that I picked up a penalty for passing under the safety car. I took the penalty at my first stop but that stop became even more problematic when there was an issue fitting the wheel. I lost so much time and it was very frustrating, because there was little I could do but focus on finishing the race. Then there was a second difficult stop and it was tough to be so far down. Singapore is a very special place and a spectacular Grand Prix, so although I didn’t get the opportunity to show our strengths here, I have some good memories and experiences to take away. It’s my third race finish now and so I have six races remaining to put that work to good use, which is what we’ll do in Malaysia in two weeks’ time.”

Pascal Wehrlein: “Well, we’ve said all weekend this was not our track, but anyway we were P16 and with a Sauber behind me, so it was not so bad. I’ve loved the whole night race experience and I’m pretty happy. This was definitely the toughest race of the season. I was pushing hard from start to finish, but particularly from the midpoint of the race to make sure we kept Ericsson behind. Given our performance through the rest of the weekend, it was unexpected that we would have the pace to do that. I was also on the Ultrasoft for 26 laps in the final stint. I had to make that work, and I did, so again, I’m very happy with that.”