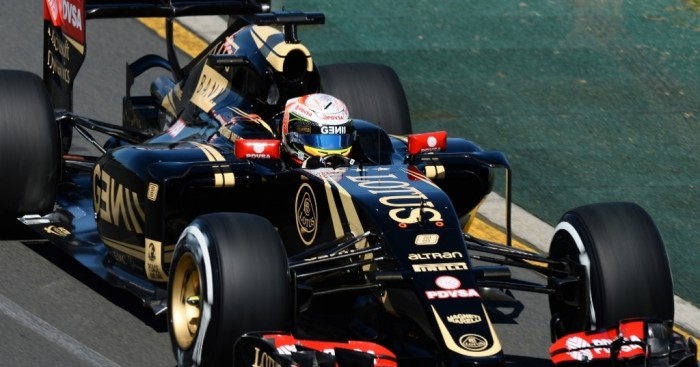 There were points in the Chinese GP for Romain Grosjean, Felipe Nasr, Daniel Ricciardo and Marcus Ericsson…

Lotus:
Romain Grosjean: "It’s the best we could do today and it’s satisfying to have achieved the team’s first points of the season. I’m proud of everyone at Enstone and at the track. It wasn’t an easy circuit for us, with a lot of front limited corners that we don’t particularly like, but we had a strong start, and most of the stints were good too. We’ve made a good job improving the car race after race and it’s great to finally score points. The next race could be promising too!"

Pastor Maldonado: "I made a great start and we were running strongly early on however later I had a braking issue which made it harder to battle. We also have to understand why the brakes locked-up so easily coming into the pits. We lost a lot of time here and it compromised the rest of my race. It was a fantastic battle with Jenson and we were passing each other very cleanly; a good, fun, exciting battle. Unfortunately, it looks like he got his braking point wrong and went into the back of me. This can easily happen when you’re fighting for position, braking off-line and using DRS, so it’s just one of those things. Certainly our race pace is good, if we qualify a little higher we should be set for a very good time in Bahrain."

Sauber:
Felipe Nasr: "It was a great day for the team, as both cars scored points. I am very pleased for everyone. It was not an easy race for us, we were fighting against Lotus and Toro Rosso, and they seemed to have a better pace than us. For myself, I extracted everything I could  from the car and also the strategy, so we can be satisfied with this result."

Marcus Ericsson: "First of all, another great achievement for the team. Our target was to get both cars into the points, and in the end we managed to achieve that objective. My race was quite tough with a lot of fights all through it. I hoped our race pace would have been a bit stronger. I was struggling a bit to get the front tyres to work properly, so I could not maintain the pace the way I wanted to. Nevertheless, there were some great fights out there. I think I had a good race, and I am really happy to have finished in the points."

Red Bull:
Daniel Ricciardo: "We got into anti-stall on the start, which hasn’t happened before; we have to look and see what happened. It’s frustrating, that shaped the race and in the traffic we struggled to get by. At least some positives are that we learned a few areas where we need to improve and the smart guys in the team can find a solution. I had a little battle with Daniil, I don’t know if I was optimistic in trying to get past, we were on different race strategies but we’ll sort it out in the debrief. We underachieved today, but hopefully we find something in the next few days and have a better result in Bahrain."

Daniil Kvyat: "This weekend has been a bit tricky, and not the happy ending we would have liked. I saw a lot of smoke coming from the rear of my car, I am not sure what happened but the team are investigating. It’s not an easy situation, but we have to stay strong, I am with the team and we will all work on it together, and we’ll keep our heads high heading into Bahrain."

Force India:
Sergio Perez: "We raced very hard today, but in the end it wasn’t quite enough to come away with some points. With the strategy we looked at all the opportunities and switched to three stops quite early in the race, which was the right decision. I was able to push hard all the time with the aggressive strategy and fight with the cars ahead of me. In the final part of the race I was catching Ericsson, but he was just too far ahead to make up the ground. We are still not where we want to be in terms of competitiveness, but there are definitely some positives to take because we made an improvement compared to our performance in Malaysia."

Nico Hulkenberg: "It is disappointing to end the race early, especially considering our previous record of solid reliability. It would have been interesting to see how our race would have developed because I made some good progress on the opening lap when I went around the outside of a few cars and then got a good run at Kvyat, which put me up in P12.  We had the pace to keep up with the Toro Rossos and Saubers, so it was positive to see our pace being more competitive. It is still too early to say what caused my retirement: the engineers are looking at the issue and still investigating. All we know at this stage is that I lost drive and had to park the car."