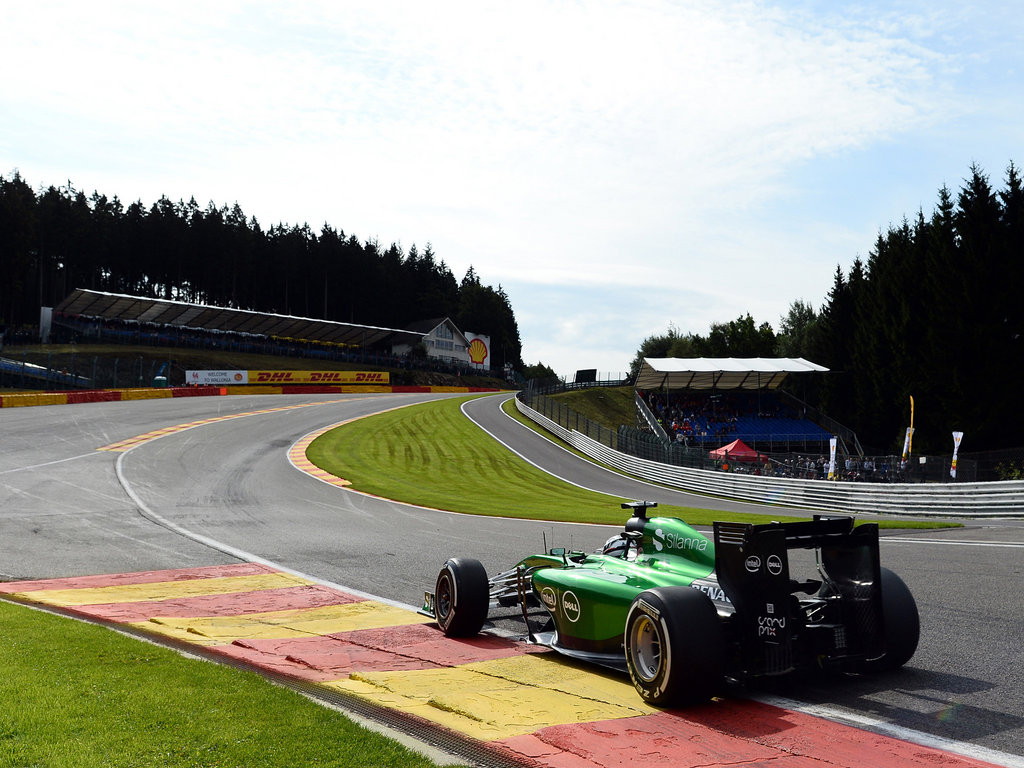 Marussia once again edged rivals Caterham, but both Lotus cars failed to see the chequered flag.

Marussia
Max Chilton: “It’s great to end the weekend on a positive with 16th place, having gained three positions and finished ahead of the Caterham. We’ve improved the car since Hungary and we are in a good place versus the teams around us, so this has enabled us to fight this weekend. That what is required now, to try to hold onto 9th place in the Constructors’ Championship. I’m pleased with how the race panned out, especially taking Ericsson right at the end.”

Jules Bianchi: “There is not much to say beyond this was a race that was not meant to be. For sure it is disappointing after a really positive day yesterday, but with the puncture and the retirement, both were problems that were out of my hands. I’m pretty pleased with my race, considering. It was a bit lonely, but I was happy with the way I managed to close the gap and manage the tyres well at the same time, which are all signs of how the race might otherwise have played out for me. It’s a shame that I was unable to take the flag due to a gearbox problem, but I can’t be too disappointed and we’ll look to Monza now as I think the package is stronger.”

Caterham
Marcus Ericsson:“I did a very decent start but then I was a bit unlucky in the first corner and I didn’t gain any positions. But I got a really good run after Eau Rouge and managed to overtake Chilton at turn 5. After that it was a
long race fighting him – he put a lot of pressure on me throughout the whole race and it wasn’t easy to keep him behind, even though I managed to do just that for pretty much the whole race. Unfortunately he overtook me with only two laps to go, which was of course very frustrating as it would’ve been nice to beat him.

“With the performance we’ve had this weekend I think we can be satisfied with our race. I’m happy with both the team’s and my work and now we just need to work even harder to continue to develop the car and push forward. I feel we have really taken a step forward this weekend here in Belgium and we just need to build on that and keep pushing.”

Andre Lotterer: “I didn’t even get the chance to sweat unfortunately. I was really looking forward to a good race and I had a good start, but then I went a bit wide at turn 17 and there was a sudden loss of power. The team and Renault will have to investigate this tonight and see what happened. It’s a shame, but I am pleased with my race weekend – I made no mistakes and did a reasonably good job. Of course it would’ve been fantastic to finish the race and do a whole Grand Prix, but it’s still been an amazing weekend. I can go home happy even though it didn’t really end the way I would’ve liked it to.

“I want to thank Caterham F1 Team for this amazing opportunity – it’s been fantastic to experience Formula 1, I got a lot of support and the team has been great. It’s frustrating to have only completed two laps of the race, but this is motorsport and these things happen.”

Lotus
Romain Grosjean: “The car was pretty good; the pace was much better than expected, which is encouraging. Unfortunately the race was compromised early on, we had to change the nose on the first lap and we picked up some damage later on from debris on the track. We lost a lot of downforce as a result so we retired the car. We’re moving forward every weekend and learning a lot, though Monza is likely to be challenging too. Singapore should suit us a lot better.

Pastor Maldonado:“We were expecting a tough weekend – both here and Monza are challenging tracks for us – although the car seemed competitive and consistent today. It might have been possible to fight with Sauber and Force India during the race. Unfortunately I felt a big loss of power at the end of the first lap and saw in the mirrors that the engine was smoking a lot so we had to retire.”