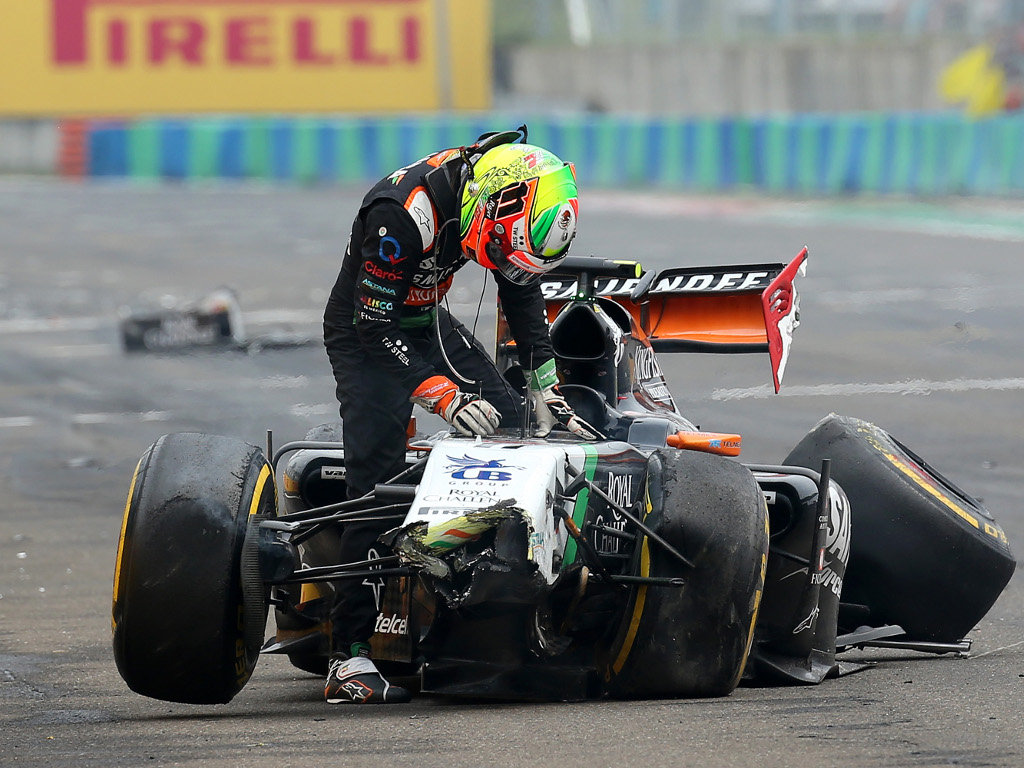 Force India are out of the points for the first time this season while Caterham also had a double DNF.

Marussia:
Jules Bianchi: “That was a tough race for me because I had to drive for more than 50 laps with a damaged car with terrible balance problems. Maldonado just came from nowhere and hit me in the side. I was really fearful it would put me out of the race and I knew it was a race that would present a lot of opportunities, for me and also our competitors. Although the Caterhams were not in the race for very long, the balance problems meant that I could not take the fight to the cars ahead, particularly the Saubers, who at one point were in a good position that might have threatened our championship placing. In the end, the dry conditions ensured the race ran more in competitive order and we ended the race holding onto 9th, which I am very happy about, obviously. It was a pretty exhausting race, having to fight the car for so long and not be able to lap quicker, but at least we got both cars to the finish and we end the first half of the season on a high note. My thanks to the whole Team and I wish everyone a very relaxing summer break, after which we will return stronger and hopefully finish the job we started in terms of beating Sauber on the track.”

Max Chilton: “I got a good start to the race and I was happy with the way the car was performing and that we managed to avoid any of the difficulties the retirees encountered. With Kobayashi and Ericsson out of the picture, and Jules having to make an unscheduled stop, it was good to be able to move up the field and then at the end have a good fight with Jules to the flag. I’m pleased for the Team that we have another two car finish and we’ve managed to hold on to our 9th place in the Constructors’ Championship, which is really important. Now we all deserve a good break so we can come back in Spa and have a good second half of the season.”

Force India:Sergio Perez: “It’s a very disappointing end to our weekend, just when it looked like we could have scored some big points. I went a little wide on the exit kerb of the final corner, lost the rear and that was it – I was in the wall. It was a very unfortunate end to our race and I feel sorry for the team because they deserved some points today. Conditions were very difficult, the track was drying and improving, and it made you want to push to the limit, but there were some wet patches that could catch you out. We’ll take the positive elements of this weekend and get back in the points in the next race.”

Nico Hulkenberg: “It was not the best day in the office and I’m feeling very disappointed. The track was drying out and I was quite close behind Checo when I made contact with him at the final corner. The previous lap he had taken a much wider line so I tried to overtake on the inside, but he took a tighter line and I couldn’t back out of the move. I made contact with his car, lost my front wing and went straight on into the barrier. It was my mistake and I’ve apologised to the team. It’s especially frustrating because there was a lot of potential in this race, but I guess it was one of those days when things didn’t go our way.”

Caterham:
Kamui Kobayashi: “It’s obviously a shame we couldn’t finish the race today but an issue with the fuel system meant I had to stop the car as I had no power. My start was pretty good – I stayed on the outside to avoid any issues going into turn one and I had good traction out of the first corner, helping me pass a couple of cars and straight away I could push. The car felt good in the wet / dry conditions, they seem to suit us, and my pace in the first stint was pretty strong. We boxed for the first time on lap nine and rejoined on softs and again I had good pace, enough to push me up to 14th. I had a big moment with Maldonado when he span after making contact with Bianchi. That’s the third race in a row I’ve had a very near miss and this time I saw him hit the Marussia and then start spinning – I managed to turn in just enough to avoid him hitting me, but there must have only been millimetres in it! After that I was into a good rhythm and the balance was fine. We were going to run quite long on that set but then on lap 24 I lost power just after turn 12 and that was the end of my race.”

Marcus Ericsson: “It was quite a good race up until the point where I crashed on lap seven. My start was ok and I was having a good fight with Chilton and Maldonado, trying to line them up through turn three and I was just a bit too eager in the throttle. The back stepped out and I couldn’t catch the car and that was it, I was in the wall. It was a pretty big shunt! I went to the medical centre straight after the crash and they told me it was about 20g, but physically I feel fine. I’m sorry for the guys on track and back at Leafield though – they put in 100% all the time and it’s obviously not a good feeling for them to see one of their cars in the wall, but we’ll come back fighting in Spa where we have some new parts and we’ll keep pushing, there and for the whole second half of the season.”