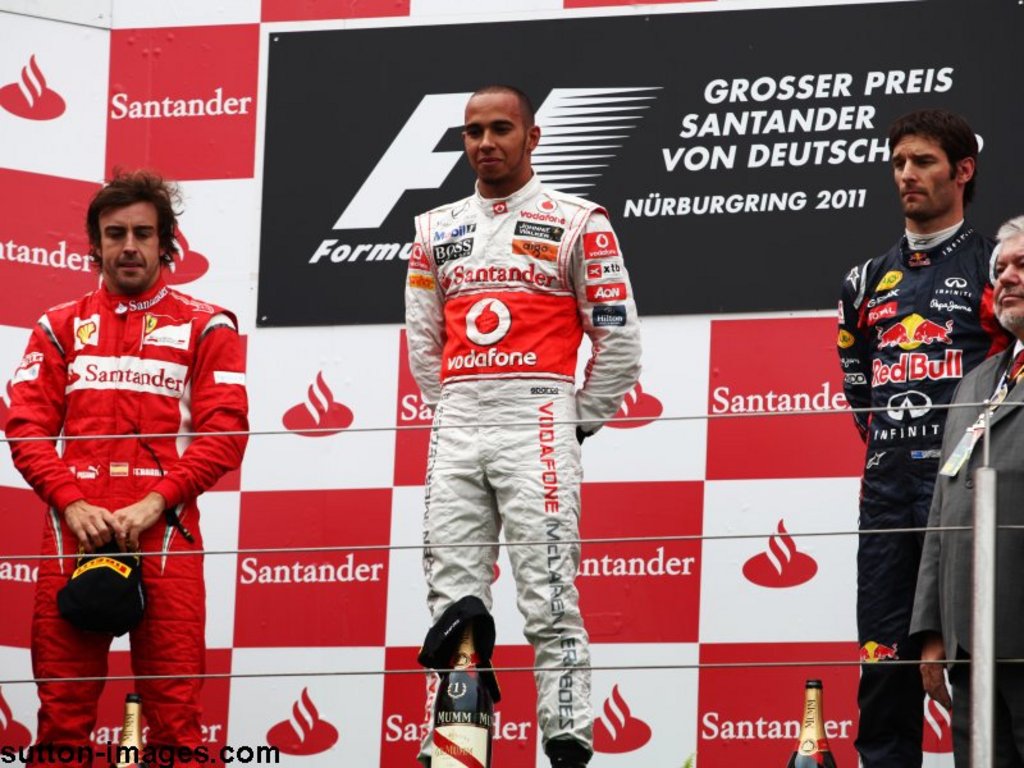 McLaren:
Lewis Hamilton: “Every win is special – but with all the emotion, effort and energy the team put into today’s victory, this one feels even more special than usual. Coming into this weekend, I said I’d take things one race at a time. So to win today is massively positive for us, but there’s a long way to go and it’ll be about consistency as well as speed from here on in. Driving lap after lap within tenths of each other was about trying to do everything as perfectly as possible – yet, being aggressive yet controlled, I felt the moves I made today were some of the most precise I’ve ever pulled off. Being able to drive with your head as well as your heart, and getting it just right, is massively satisfying. The fight for the world championship will be very, very, very hard now. We’re back in the fight though, and I really hope we can carry this forward and keep the momentum going.”

Jenson Button: “First, I’d like to congratulate Lewis on a fantastic victory this afternoon. He’s done a great job all weekend and this result gives everyone in the team a massive boost ahead of next weekend’s race in Hungary. As for my race, I had a terrible opening lap. I got too much wheelspin away from the line and had to fight my way back from 10th place. I got stuck behind Vitaly [Petrov], who was very difficult to pass because he moved a lot in the braking areas. But once I’d passed him, I enjoyed fighting back through the field. I’d just overtaken Nico [Rosberg] for sixth when my power steering started to get heavy. Soon after, we retired the car on safety grounds because we had a hydraulic issue. It was a very disappointing end, but these things sometimes happen in motor racing and you just have to put it behind you and move on. Already I’ve turned my attention to next weekend’s Hungarian Grand Prix, where I hope to have better luck. Vodafone McLaren Mercedes goes there on the back of a win and it’s my intention to be back on the podium for my 200th grand prix.”

Ferrari:
Fernando Alonso: “After a second place like this, it’s easy to say that it could have been better, but I am pleased nevertheless. We must improve in qualifying, because we have a very strong race pace and I don’t think there’s any doubt about that. Everything went well today: the start, the pit stops and the strategy. We still lack something on Saturdays, because yesterday we were three or four tenths away, but I am confident we can also improve on this front. Today, Hamilton was quicker and so well done to him and his team: when I was behind him I was pushing as hard as I could, but I could not get very close. Even though I came out ahead of him at the second pit stop, I had absolutely no grip and he managed to pass me round the outside: immediately he then built up a few seconds lead. Today, we were clearly superior to the Red Bulls in terms of performance and this is important, given where we were at the start of the championship. That does not mean it will be the same in the coming races, but the situation is getting back to normal. The classification? I’m not looking, but if there’s a chance, it depends on always finishing on the podium hoping that Vettel does not do the same. Why did I park the car at the side of the track at the end? The team asked me to cut the engine as a precaution and luckily Mark was alongside me and stopped to give me a lift. I don’t know how he knew I was shutting off the engine; maybe he has a radio link to my engineer!”

Felipe Massa: “It was a good race, in which I went head to head with Vettel for many laps. A shame about the time lost at the start behind Rosberg: the Mercedes is one of the hardest cars to overtake because it is very quick on the straights. The DRS was not a big help here, to such an extent that I passed him and Vettel under braking for Turn 1 where you cannot use the moveable wing. Sure, I would have preferred to have stayed ahead of the World Champion right to the end, but at the final pit stop there was a problem with the wheel nut on the left rear which cost me a few seconds: these things happen and recrimination achieves nothing. I got away well at the start, but then Vettel closed the line on the inside and I tried to go round the outside, because there was nowhere else to go if I wanted to make up some places. In fact I actually lost one to Rosberg. Now we go to Budapest: we will have the softest tyres there and, let’s hope some more summer-like weather, which should help. We must continue down this road and we will get some satisfaction from it I am sure.”

Red Bull:
Mark Webber: “I’m disappointed not to get the win today – but it’s another good result. At the end we needed to try and do something a bit different; we led the middle part of the race, but we couldn’t get the tyre range around the pit stops to get the undercut on the second stop. I drove on the limit, but we were not quick enough and that was it. Lewis was able to cover us all the time and respond to my pace, so you couldn’t get the gap. He got a good start and mine wasn’t so good, but the starts aren’t key to the race finishes this year. I did pretty much everything I could today – it was very intense racing between the three of us at the front (Lewis, Fernando and Mark), I was pushing to the limit, but there wasn’t much more we could do to challenge for the victory. We’re a strong unit though – a good team and we’ll push on. We know what we need to do”

Sebastian Vettel: “It was tough, a difficult race. In the beginning, it didn’t feel so bad but I made a mistake, which bought me back to fifth and from there it was a tough recovery. I think fourth was the maximum we could achieve today – it’s not satisfying, but you have to accept that others were quicker today. I didn’t feel good all weekend and didn’t have the pace that Mark did in the car. The pit-stop at the end was fantastic. You come into the pit lane behind the other car and into your box and you can’t wait to leave as soon as the boys have changed the wheels. As I came out it was nice to see the Ferrari still stationary – that was all down to the boys, they did a very good job. Both Felipe and I were battling for a lot of the race and we were both on the edge. We had a problem mid-race with the brakes, but we managed it well, so we can be happy with the recovery we had from that. Hungary is the next race, which is normally a good track for us, so we’ll see, but we have homework to do. McLaren and Ferrari were very quick in the race and we need to come back to the pace they have.”

Force India:
Adrian Sutil: “It was a great race today and I’m so pleased to get this result for the team because we really deserved it. We had a great car all weekend and everything just went perfectly. The