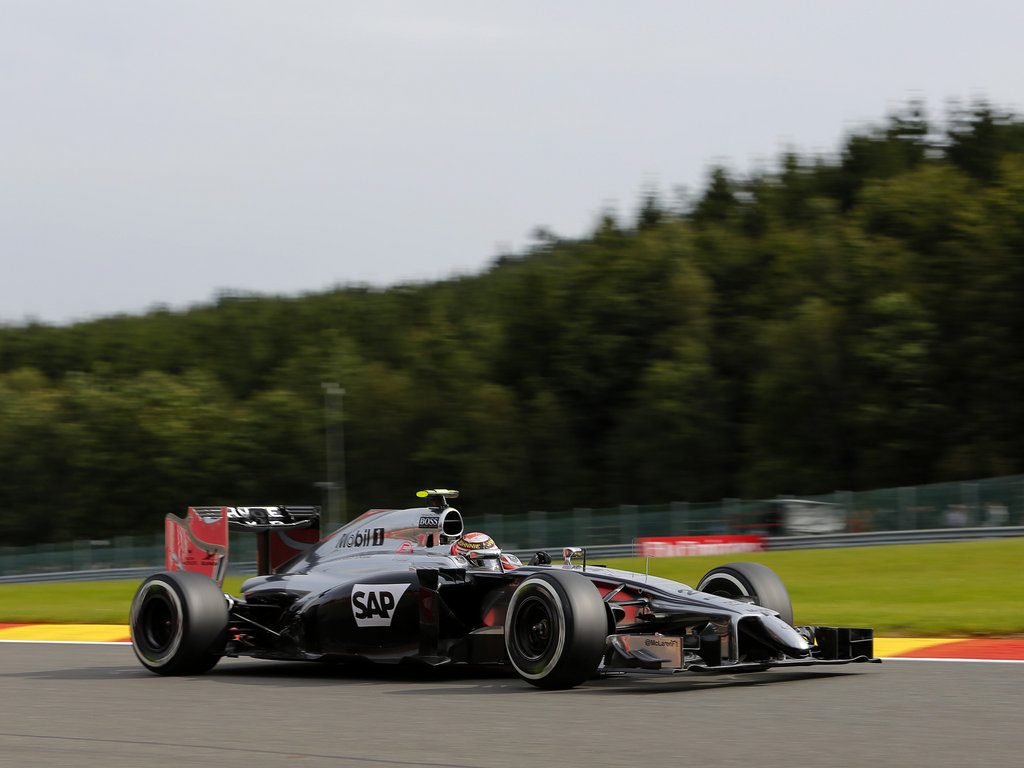 Kevin Magnussen held off McLaren team-mate Jenson Button while Sergio Perez and Daniil Kvyat were also in the points at Spa.

McLaren
Jenson Button: “”We played the long game today – most people were making their pit-stops early – and I felt I kept the tyres in good condition. I also had a lot of fun out there, especially racing Kevin [Magnussen], Sebastian [Vettel] and Fernando [Alonso] at the end. In the final laps Kevin and I didn’t touch, although I had to back off a bit at Turn Eight, when Fernando ran off as he and Kevin were dicing. I lost a place to Fernando there, which was a bit of a shame, and in turn a place to Sebastian after that, but as I say I really enjoyed it out there. It’s such a fantastic circuit; driving here always feels so good.”

Kevin Magnussen:“Despite being penalised after the race, I have to say I enjoyed the weekend. I had great fun out there this afternoon – I was involved in exciting racing on an awesome circuit. It was a tough challenge, because everyone around me had slightly fresher tyres than I did, and they’re all great drivers: they’re not the easiest guys to keep behind. So I just tried my best to defend my position as well as I could. Changing the subject, I want to say how brilliant it was to see so many Danish fans in the crowd. The support I’ve had this weekend has been incredible – I’ve never experienced anything like it, to be honest. Last but not least, it was good that Jenson got past Fernando at the end, to score some useful points for the team.”

Force India
Sergio Perez: “Somehow I avoided all the crazy battles that took place today because my race was quite straightforward. I went flat out and I think we achieved the most that was possible from the race. I lost a bit of time in the second stint, having to pass the two McLarens and I took a bit too much out of the tyres, which cost me some time later in the stint. In the final ten laps I was under a lot of pressure from Kvyat: he was catching me quickly, but I managed to hold him off. In the end, we got some points out of this weekend and that’s the important thing.”

Nico Hulkenberg: “It’s a shame to miss out on points today but I guess I paid the price for the mistakes yesterday [in qualifying] which gave us so much ground to recover in the race. My start was not great, but I was able to gain a few positions on the first lap. After that I had good pace, but it was hard to show it because I was stuck in heavy traffic. There was a train of cars in the midfield with everybody using DRS and making it very difficult to overtake. I think that’s where we lost the most time today and it stopped me from scoring points. I was closing quickly on Kvyat at the end and I was very close, but I probably needed an extra lap to be able to get ahead.”

Toro Rosso
Daniil Kvyat: “”This was a good but tough race, especially the end where I was defending my position against Hulkenberg who was on new options. That was quite thrilling, as I had to look after my tyres and at the same time fight to keep tenth place. The car handling during the race was good and I was quite pleased that the weather stayed dry. All in all, it was a positive weekend, where we were able to improve step by step and I’m happy to take away a point from this race. I can’t wait to get back into the car in two weeks’ time when we will be in Monza.”

Jean-Eric Vergne: “The start wasn’t great. There were some cars already passing me by on the straight and I couldn’t do anything to defend myself. It’s a bit frustrating to sit in the traffic, with my tyres which didn’t last very long and suffering of a lack of performance. We need now to have a look at all the data to see if there is anything we can do to be back in Monza in a better condition. We are not far from the points but we need to sort a few things out, have a clean weekend and score some points at our home Grand Prix.”

Sauber
Adrian Sutil: “It was an exciting race, but 14th was the maximum today. Unfortunately, I got stuck behind Felipe (Massa). As I came in for the pit stop, he also went in at the same time. In some sectors on track I was faster than him, but on the straights he was just too fast. Felipe’s engine was simply too strong and I could not overtake him. We then decided to race with a three-stop-strategy, which in the end was the right choice. I felt more comfortable with the soft compound in comparison to the medium tyres. I am satisfied with the procedures over the weekend. The team did a good job without making any mistakes.”

Esteban Gutierrez:“Start on soft tyres, afer 14 laps change to soft tyres and after 30 laps change to medium tyres “It was a tough race. The race strategy was to attack straight from the beginning on. Unfortunately, it did not work out as expected, but at least I was able to gain some positions during the first laps. Throughout the race I struggled a lot with the medium tyres. This aspect made things complicated and put us in a difficult position. Our pace was too slow to finish the race in the points. We need to keep working to be in the top ten as soon as possible.”