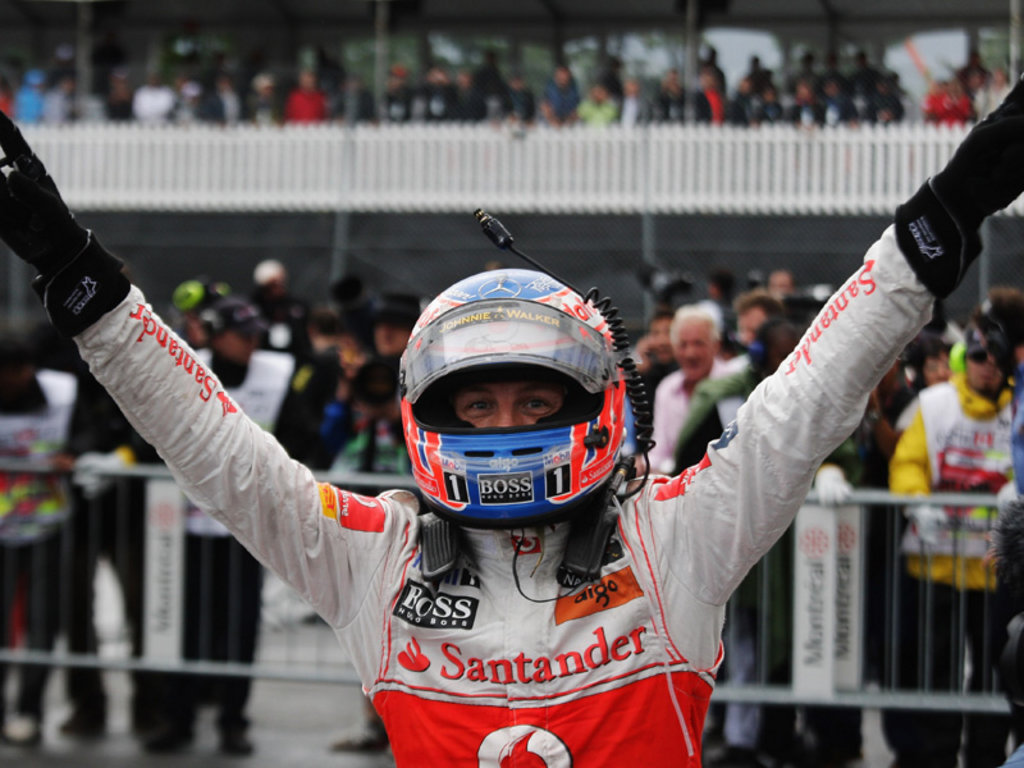 McLaren:
Jenson Button: “That was the best victory of my career, and today is therefore a very special day for me. I fought my way from last to first to win the race, and I overtook the cars in front of me on the track. To win a grand prix by getting one over on your rivals with a series of strong overtaking moves makes it even better.

“Races in changing conditions are always very tricky – but I love it when you’ve got to search for grip on the track rather than knowing in advance where it is. It was an amazing victory – I don’t think it could have been any better, especially after Monte-Carlo where we thought we had a win in the bag but were then disappointed at the very end. I was a little bit fortunate today when Sebastian [Vettel] made a mistake on the last lap, but I think we deserved that bit of luck!

“As far as the incident with Lewis is concerned, I couldn’t see a thing behind me except a blur of Vodafone rocket-red, but that could have been my rear wing: obviously, it’s the same colour as Lewis’s car. I moved to the left, which is the racing line, then I felt a bang, and I feared it was game over for both of us. Lewis knows that I didn’t do it on purpose, and I know that he didn’t do it on purpose either. I spoke to him before the race restarted, and it’s all good.”

Lewis Hamilton: Red Bull:
Sebastian Vettel: “Of course I’m disappointed. I think it was a very difficult race from start to finish and we led every single lap, apart from the last one, or part of the last one. I think I was probably too conservative when I was in the lead after the last safety car; I didn’t open the gap enough and was trying to hold the gap to the cars behind. Then I saw Jenson coming through, I was pushing and thought it would be enough to the end, but obviously it wasn’t, as I made a mistake. It’s down to me, I locked up the rear a little bit and what you have to do then is open up the car and go a bit straighter, there’s only one line and I ended up in the wet, so it was quite easy for him to pass. But, surely I think it was a good day today, it’s easy to make mistakes and there were a lot of cars not finishing, so it’s good to get the points. That said, at the moment – when you have it in your hands and you give it away – then it’s not the sweetest feeling. But, I think all in all, it was a good race for us today.”

Mark Webber: “It was an eventful race! I had a few people to pass after the break; it wasn’t too hard until the dry line appeared on the racing line and it was slippery off line. It was then very hard to clear some of the guys, as it meant there was such a narrow window to get down the inside of people. When you have experienced guys like Michael (Schumacher) and Nick (Heidfeld) to pass, well those guys know what they’re doing, so it becomes even trickier. I decided to roll the dice and go onto the slicks. I was happy to see that not everyone followed immediately, so I had two laps which was enough to bring me back in the game for the podium. Then it was a pretty good fight with Michael, we both wanted the same bit of track when we were braking for the chicane, but when JB arrived, he was absolutely flying. Today’s result means plenty of points for the team and it’s a good result, so I’m pretty happy with that.”

Mercedes GP:
Michael Schumacher: “I am leaving this race with one eye laughing and one eye crying, as I am not sure if I should be excited or sad about it. Having been in second place towards the end, I would obviously have loved to finish there and be on the podium again. But even if it did not work out in the very end, we can be happy about the result and the big fight we put in. A good strategy after the red flag made it possible, and I am very happy for our team. I would also like to send a big compliment out to the spectators who stayed with us in those difficult circumstances for so long and even cheered us up. That was impressive, and I am glad that I could play my part in entertaining them.”

Nico Rosberg: “It was a very demanding race this afternoon. In general, everything was okay with my car and, at the end, I was up there in the points but I made a mistake at the hairpin on lap 66. I was trying to overtake Kobayashi and was very close behind him in turn 10; he slowed when I didn’t expect it, I hit the back of him and damaged my front wing, which then came off on the last lap. The same thing had happened to me, but in reverse, when Sutil hit me. I could perhaps have been a little more aggressive with some of my stops today, pitting a little earlier, but it’s always difficult to judge the risk. Although my result was not so good, I’m sure it was an exciting race for the fans in front of the TV. We have some positives to take from this weekend, and we will look to give a strong performance next time in Valencia.”

Renault:
Vitaly Petrov: “Today, the conditions became very difficult after a few laps and stopping the race was the right decision. There was absolutely no grip and the car was aquaplaning everywhere. When it restarted, we tried to make the most of our position : I was fourth because I decided not to change my tyres before the red flag. From then on, I was fighting for a good position. On one hand,