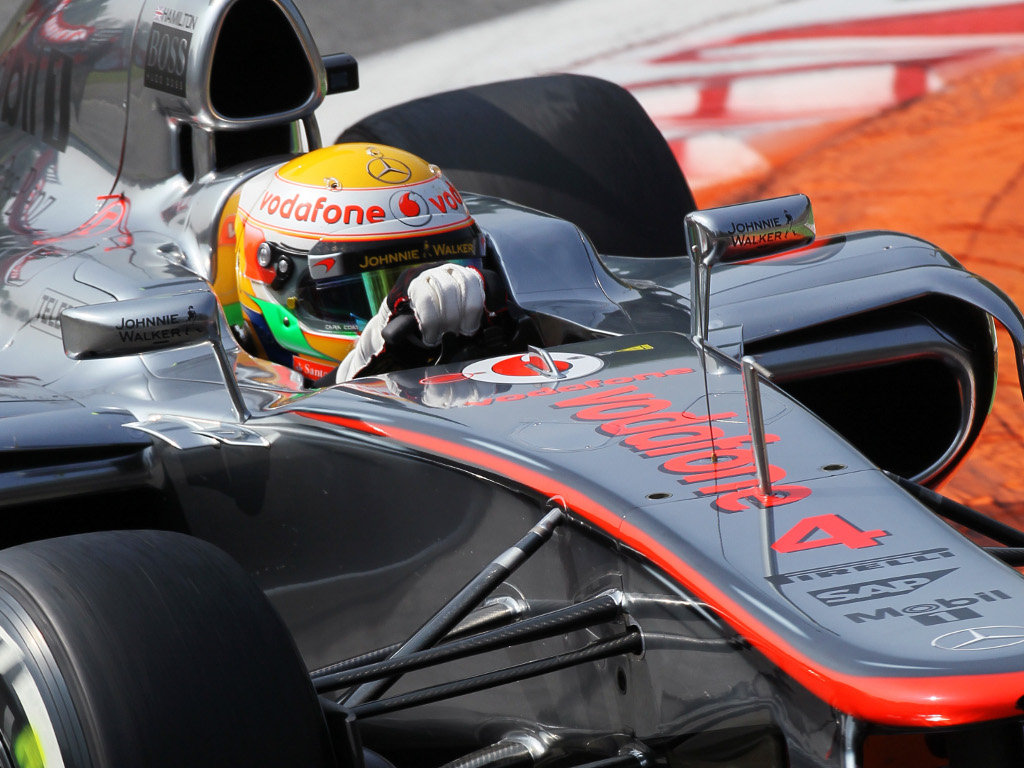 McLaren:
Lewis Hamilton: “Winning at Monza is one of the greatest experiences of my Formula 1 career. I absolutely love this place: I’ve been coming to Italy to race since I was 13 years old and I just love the culture, the food and the people.

“Since I started in Formula 1, Monza has been one of the races I always wanted to win at – it’s such an incredible, historic circuit and all the great racing drivers have won here. To finally put my name on that list makes me feel extremely proud, but also very humble.

“Our car has been fantastic all weekend, and it was nice to have a relaxed grand prix with no troubles. I was out on my own for most of the race and just tried to manage the gap behind me. I was cruising at the end, but, once I heard that Sergio (Perez) had got past Fernando (Alonso), I had to push a little to keep the cushion over second place.

“The race was very unfortunate for Jenson – we were running first and second at the time and it would have been great for the team if we could have finished like that.

“This championship is proving to be so unpredictable – and I’m so grateful that we’ve got a good car and that we’re in the fight. We’ve got seven more races on the calendar. We should enjoy today, but this victory is just one step. Tomorrow, we’ll start all over again, for Singapore.”

Jenson Button: “I had too much wheelspin at the start, and that dropped me to third and caused me to lose a lot of time behind Felipe (Massa). But it was nice to get past him, put some clear air between us, and then start chasing down Lewis.

“I was never going to challenge him for the win, but it would have been great for the team if we could have finished first and second. But it wasn’t to be.

“I don’t entirely know what caused my car to stop – I’m told it was a fuel system problem that we’re still investigating. The engine cut out and I had to coast to a stop. These things happen.

“But, looking for the positives, I want to offer my congratulations to the whole team. We’ve proven over the past few races that we’re very strong in both qualifying trim and race trim. That consistency is really key, and we haven’t seen that form from any team all season, so that’s very encouraging indeed.”

Sauber:
Sergio Perez: “This was a very enjoyable race for me. It was one of those where you have the pace and are the one to attack. I am very happy for the team which is working very hard. It is a really good team, I am proud of it. I didn’t have an easy first stint with the hard tyres but it was certainly the right strategy. I was frequently in contact with the team on the radio because I was worried the tyres would suddenly drop and we would have to change our strategy. Also we were not quite sure how quickly they would warm up.

“However, it worked out fine, I could stay out as long as I needed to for our strategy. The second stint was then really maximum attack and I must say all of the drivers I overtook have been fair. They didn’t leave me more room than they had to, but it was always enough. This is the way it should be. I am very pleased at having achieved my first European podium in Monza.”

Kamui Kobayashi: “First of all congratulations to Sergio – well done, mate! It is a great day for our team. I have nothing to complain about with my race, but for some reason I just didn’t have the pace. Obviously I raced on a different strategy as I had to start on the tyres I qualified with. For both compounds I admit I had a lack of experience as we hadn’t managed to do long runs on Friday. I just had a normal race, so there wasn’t really anything special.”

Ferrari:
Fernando Alonso: “This Sunday was perfect for the championship, almost like a film with a happy ending: another podium finish, three of my closest rivals with no points and an increased lead over my closest pursuer.

“I remain convinced that, but for the problem in qualifying yesterday, we could definitely have had every chance of starting from pole and if we can be equally competitive on Saturdays at the tracks that are coming up, it will be very important for the end of the season. We must try to win some more races and to manage the lead we have in the classification.

“Here we had to mark Vettel, but in Singapore it will be important to keep an eye on Hamilton, who is now second. When I found myself fighting with Vettel I went off the track and, from then on, the car was not right. It wasn’t nice bouncing through the gravel but, afterwards, I was able to overtake him anyway a few laps later. I don’t want to comment on the penalty he received, but what he did was definitely on the limit.

“The opening laps were the key to my race. I passed a few cars – Kimi, Di Resta and Michael – and finding myself sixth almost immediately put my race on a more even course. Racing for Ferrari at Monza and standing on the podium is something special: driving a red car is different because the fans are exceptional. If they were told not to eat for days to have the chance to drive a car from Maranello, they would do it and this is what makes the passion for Ferrari unique around the world.”

Felipe Massa: “I’m pleased with this result, even if I’d been hoping to make it to the podium. We faced higher tyre degradation than we expected, very different to what we had seen on Friday in free practice.

“A shame, because while the tyres were still working, I could match the pace of the McLarens, but then I began to lose the rear end earlier than they did. It was not an easy race: towards the end, Perez came back at me very strongly and there was nothing I could do to fend him off. I worked for the team, trying to help Fernando, which is as it should be. I have always done it and will do it whenever it’s necessary.

“I don’t think a two stop strategy would have worked: looking at the data, for us it was definitely slower than a single stop. When the team had no telemetry, we spoke for a long time on the radio and, all in all, we were able to manage the situation in the best way possible. I don’t know if this race changes anything regarding my future, but definitely the most important thing for now is to keep going like this, working with great concentration and trying to do my best for the team.”

Lotus F1:
Kimi Raikkonen: “It’s good to go into third position in the Drivers’ Championship but we lost some points to Fernando (Alonso) which is not ideal. It was a difficult weekend as we were too slow in a straight line, making it very difficult to hold off anyone and even with the DRS it was difficult to overtake the cars in front. We did the one stop strategy and the tyres were fine. We came into the race looking for sixth or seventh so fifth is the maximum we could have done here