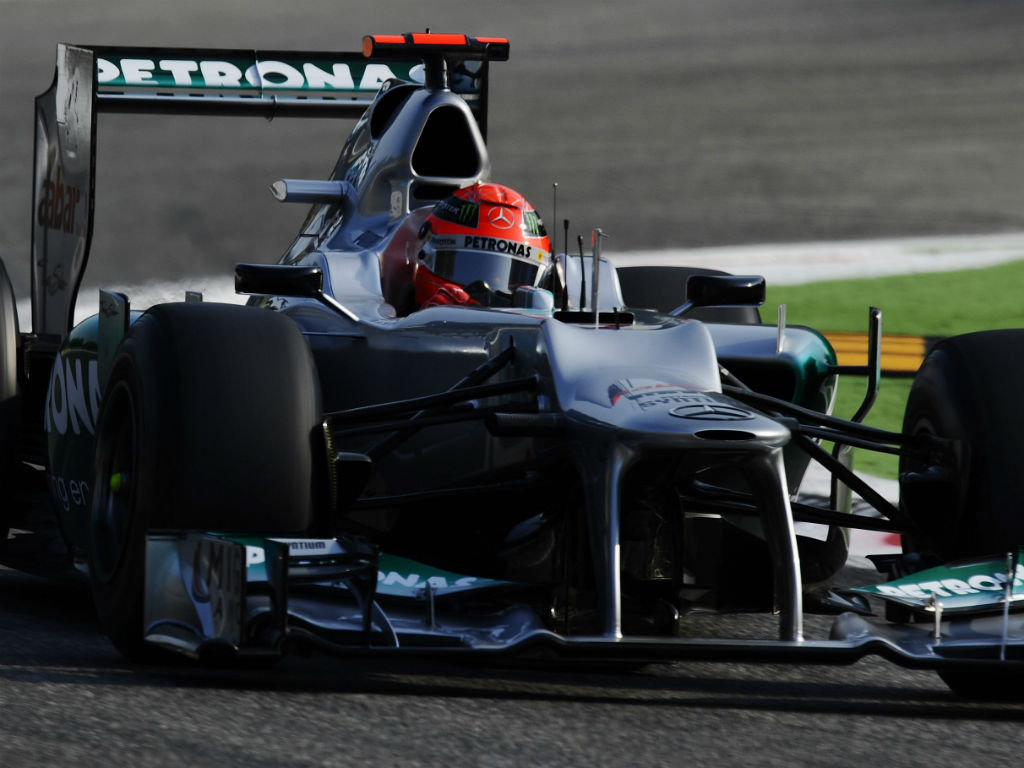 Michael Schumacher narrowly missed out on a point in Suzuka meaning Merc joined Caterham, Marussia and HRT as the only teams not to secore…

Michael Schumacher narrowly missed out on a point in Suzuka meaning Merc joined Caterham, Marussia and HRT as the only teams not to secore…

Mercedes:
Michael Schumacher: “I have mixed feelings after the race here in Japan, because it’s obviously unfortunate to come so close to scoring points and not manage it, after a race which went better than we expected. In the final laps, I had a nice and interesting battle with Ricciardo, but in the end I couldn’t get past him because the Toro Rosso was so quick on the straights. That’s why we have to say we couldn’t have got much more out of it today. Now let’s see how things go in Korea.”

Nico Rosberg: “I had a good start to the race but unfortunately it ended fairly quickly today. In the first corner Grosjean spun into Webber and that also led to my accident. I began to brake but Senna crashed into me from behind which destroyed my rear tyre and meant that I had to retire. It’s a shame as I felt very comfortable with my car on the installation lap, and I was confident that we could score some decent points. I’ll now hope for a better weekend in Korea.”

Caterham:
Heikki Kovalainen: “I had a fantastic start, avoided all the problems in turn one and passed Glock as soon as the safety car came out. I was running really well in 11th until the first set of stops and in that first stint the car felt great. I was keeping the pack behind me and tyre wear on the softs was good. We went onto the hard tyres for the second stint and, again, wear rates were excellent. We were even thinking about doing a one stop race but towards the end of the stint they started to go off so we came in with ten laps left and from there it was all about making sure we got to the flag without any problems.”

Vitaly Petrov: “At the start I had to avoid the problems in front but got through that ok and pretty quickly settled into a good rhythm. My first stop was fine but after that we lost KERS and that obviously cost me time. I also had a problem with the radio and couldn’t hear the blue flag calls and that ended up with the drive-through penalty. From where I started on the grid and with the KERS issue I think I probably got as much as I could out of the car today. It’s been a bit of tough weekend but it’s good to see the team working so hard to keep pushing us forwards and next week in Korea we have another chance to keep fighting.”

Marussia:
Timo Glock: “I’m very happy to say it was a good race for us today. The start was quite a shock when I saw all the cars flying across the track. Heikki came through it quite well but I was right behind him and I was able to overtake him in the Esses. I was up to P11 but I knew that would be short-lived because we were struggling a bit with traction out of the last corner and obviously they have KERS and we don’t. Heikki got past and I continued to lose quite a lot of time in that corner afterwards – three or four tenths each lap into turn 1 and the Esses – which allowed the other guys – who also have KERS – to pass me. In general though we had good pace and were quite consistent. The behaviour of the tyre to the car was very good and we were able to stay out quite long. The first pitstop was very strong – the fourth quickest team of the race – so a great job by the crew as they work so hard on that every day. I had good pace on the prime tyre and was going well, but at last pit stop I was a little long in the box having misjudged the grip, so my mistake and sorry for that. I was then able to close the gap to Heikki so our strategy was spot-on. We were as close as four seconds at one stage but the blue flags opened the gap again. Still, eight seconds away at the end was pretty good! We have to be happy I think. We fought well, the car was a lot of fun to drive and it’s great to have a consistent car again. We continue to have better pace in the race, so we will keep working hard on our overall performance and enjoying this very positive final phase of the season.”

Charles Pic: “Obviously it is disappointing for me to have to retire as we were coming back strong at that point in the race. It is also the first retirement for a while. The start was difficult as we had to avoid the trouble at the first corner, then on the first stint I was struggling for grip with the Hard tyre. This improved when I switched to the Soft tyre for the second stint. My race was going well and I was behind Timo and ahead of Vitaly and Pedro. Unfortunately I misjudged the pit box on my second stop, going quite long, and lost a lot of time. Shortly afterwards I had to stop due to a problem with the engine. Overall it has been a good weekend and I have enjoyed my first experience of this amazing technical circuit. I look forward to another new circuit for me next weekend and a better result.”
HRT:
Pedro de la Rosa: “Today’s race was quite good and we could say we’ve taken a step forward, although we still have plenty to do. The first stint was good but we had a problem in the first pitstop which made me lose quite a lot of time. My times with the hard tyres towards the end were very good and we were right in there. The car was handling well and we got close to Pic and Petrov, which for us, at a track like this, is fantastic.”

Narain Karthikeyan: “I had a good start and passed Pic on the first lap. The car was working well, it had good pace, and after the first pitstop I was ahead of Pedro and completing a good race. However, we suffered a problem with the car later and, coming in for a second tyre change, the team decided that, as a precautionary measure, it was best to stop. Now it’s time to think about Korea and work to take another step forward.”