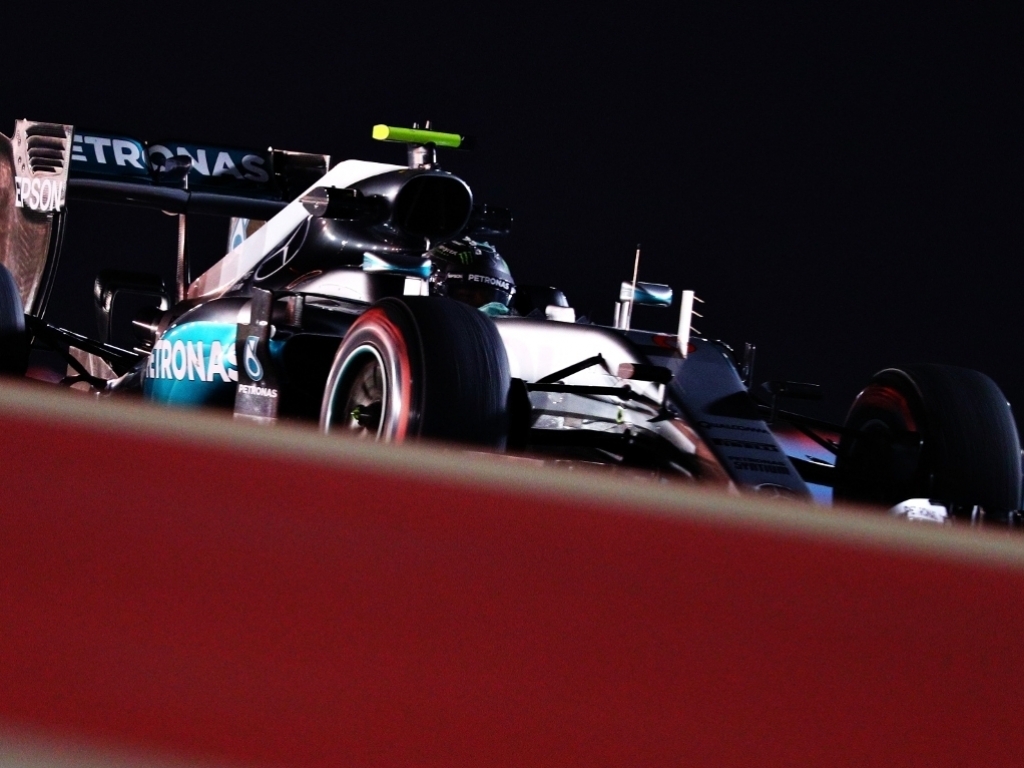 Nico Rosberg eases to victory at the Bahrain Grand Prix, Followed by Kimi Raikkonen in P2 and Lewis Hamilton in P3m while Sebastian Vettel suffers an early retirement before the race could even begin.

Mercedes:
Nico Rosberg: “Wow, what a weekend! I am so happy with how everything is working out at the moment. The start was definitely the key to my win – and that was a really great moment, as it was an area that we put a lot effort into before the race. Leading into Turn One was a relief, to be honest, as I could see in my mirrors that it was very busy behind me. But from then on I was able to control the pace and take the win. Strategy-wise we had to play it safe. It maybe wasn’t the quickest option – but we had to cover the risk of a safety car. It was an almost perfect weekend for me – only qualifying could have been a fraction better. What a great start to the season – a big thank you to the guys and girls at the factories for this amazing car! Now I look forward to China, where I won my first ever Grand Prix, so I have plenty of positive energy heading there.”

Lewis Hamilton: “I didn’t get a good start today – but it actually wasn’t as bad as the last one. They were completely different incidents – both painful, but this one probably more so! In Melbourne I had loads of wheel spin but this time I just didn’t get away as well as I needed to and that was down to me. If you start on pole and go backwards it quickly becomes a domino effect. It’s so easy to get clipped from there and unfortunately that’s what happened at Turn One. Nonetheless, I managed to climb back up there and at least get some points, so again it was good damage limitation. I could easily have not finished the race, so I’m glad it wasn’t more points dropped in the end. I had so much damage on the car that I couldn’t keep up with Kimi. I was fighting hard and did what I could with it – but it wasn’t quite enough to catch him, so in the end I had to just save the tyres in case of a safety car. A big thank you to all the fans who came out this weekend. I’ve got some incredible support here. I’ve been so well taken care of, so I look forward to coming back next year. Now I’ve got to wait until China for the next battle – but it’s a track that has been good to me for many years, so hopefully things will turn around a bit for me there.”

Kimi Raikkonen: “The start was not ideal, but luckily we did not lose too many places in the first lap. After that I tried to recover, and was able to overtake some cars and make the best out of it. We managed to do good pit-stops with the right tire choices and the speed was quite good, too. In the end we were catching up a bit on the Mercedes in front, but I never got close enough to try and pass Nico. Considering what happened in the first lap it’s a pretty ok result, it’s not what we want but we keep working and improving things. We are going in the right direction, but obviously it’s not ideal for the team to have only one car finishing the race. In this sport we always push to the limits and sometimes things can go wrong, this is not what we want but it’s part of racing. We know that the car is pretty good but we have certain things to improve and still some work to be done.”

Sebastian Vettel: “It was a very short race today, I didn’t even break a drop of sweat…We had a failure, I saw a lot of smoke from behind and I lost power so we decided to stop the car. For sure it is frustrating, because in the end I am here to race. The problem came as a surprise, both for me and the whole team, as I was approaching Turn Eleven. Now we need to understand exactly the problem and learn from it. It is not ideal and we can’t be proud of it. But we had a good preparation over the winter, we are pushing very hard and we know that we can still improve. We still have a lot of races ahead of us, this is going to be a long year so even if today it was not good because I couldn’t score any point, we’ll make sure that the next race goes a lot better… Congratulations to Kimi. It was important that during the race we supported him on both sides of the garage.”

Red Bull:
Daniel Ricciardo: “The race start was interesting. I didn’t get off the line very well and I could see it was getting a bit chaotic into Turn 1. I tried to capitalize on it but ended up with damage on the front wing when Bottas and I came together. There was a moment that I thought I would have to pit for a new wing as the chunk that came off looked pretty substantial but we were able to hang in there for a few laps, racing with the Williams. The damage didn’t affect me too much and we had a good race, although a little lonely towards the end, with some decent points scored.”

Daniil Kvyat: “I am very pleased with today. It was quite difficult in the beginning but I would say the race went very well considering where we started from. We had good pace and a good result which I am very happy with. The strategy worked well and the team managed to avoid traffic on the track, when we saw an opportunity we went for it and it made the race good fun. We found a nice rhythm during the race. It was also good to see we were challenging the front runners, at the right tracks I think this will be interesting. We need to work on our qualifying and not repeat the disaster of yesterday, for China I will sit down with my side of the garage and analyse qualifying to improve that. It was a really good wheel to wheel race which I think is good for TV and I’m really happy to have been involved in that action. I leave here with the glass half full.”

Haas:
Romain Grosjean: “This was amazing, there was no safety car, no incidents, nothing on track that made us finish as well as we did. We were fighting not far from the Red Bulls, and in front of Williams and Toro Rosso. This is crazy. I have a good feeling in the car. The tyre degradation has always been my strength in the past. Now that we have softer compounds it is something that I do like, so I have a very good feeling on the super softs. I set the car up well for it and I had a fantastic race. That car has a very good baseline, everything is working well – suspension, gearbox, brakes, so it is just nice to drive.”

Esteban Gutierrez: “My feeling was always good from the beginning. It was really close, within 0.1s were four cars or something like that. We are there in the game. It is nice to be competing, it’s nice to be looking at the last 0.1s and making a difference. It is good to be in that position, the proper midfield, it is the first time in my life I can be there!”