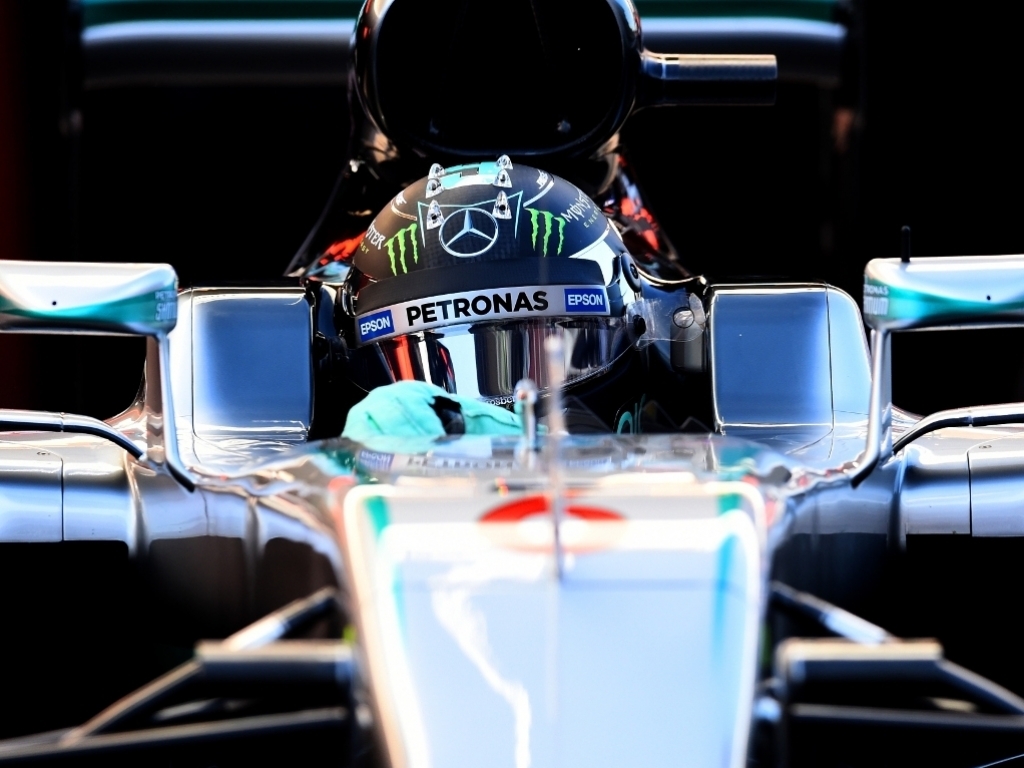 Nico Rosberg: “That was a perfect race for me. The start was tricky, as I was on the dirty side of the grid and Vettel managed to be ahead. He did a really good job at the start – but we chose the perfect strategy by going onto the medium tyre after the red flag. A big thanks to the team on the pit wall for that, to everyone back at the factories for this fantastic car and to everyone back in Europe who woke up so early to tune in for the race. I hope it was a good show for you! We can enjoy this moment for sure – but we know now just how strong those red cars will be this season, so we cannot afford to relax. I’m really looking forward to the next races and hopefully some more exciting battles. Finally, I also have to say it was a big relief to see Fernando walk away from his shunt. It shows how incredible the safety of these cars is now, which is great to see.”

Lewis Hamilton: “I’d had a perfect weekend in every way up until the lights went out and felt confident heading into the race. I got a bit of wheelspin off the line then got pushed wide at the first corner, so from there it was just about recovering. But these things happen and I’m grateful for the way I was able to fight back through. P2 isn’t bad in terms of damage limitation after a start like that. I spent a long time stuck behind one of the Toro Rossos and there wasn’t a lot I could do about it as he was on a quicker tyre. I could just see the others pulling away, so the safety car definitely helped by bunching us all up again. I was already on a one-stop strategy and, to be honest, I don’t know why everyone else didn’t do the same on the medium. I’m happy they didn’t, as I probably would have finished a lot further back. In any case, the team did a great job to help us pull it back and there’s still 20 races to go, so I’m feeling pretty chilled. I’ve had far worse starts to the season, so I’ll take that today and head into the next one looking up.”

Ferrari:
Sebastian Vettel:“I obviously had a great start, I was very happy to see that I had a better start than the two cars in front of me, reminding me of Hungary last year and it worked out. It was great to see that Kimi made it as well, so we got first and second and from there we dictated the pace. The red flag didn’t help us, but to be fair the most important thing was that Fernando and Esteban were alright. It was the right decision to stop the race. First time I went through I saw the debris on the track. Naturally the expectations are higher when you had a strong season last year and you wanted to close the gap. Yesterday we were a bit further away and today we were closer. In general it was a great race, I was racing flat out until to the end, I didn’t want to go onto the grass but I did the lawn mower! So I don’t have to do it next week when I go home, but for sure we would have liked more from today.”

Kimi Raikkonen: “Today we had a good first part of the race but at a certain point I lost power and had to retire. I don’t know exactly what happened, I don’t think that the problem was related to the engine because it was still running. It must have been something else. It’s a very unfortunate thing for the whole team. After the winter testing we had a rough idea that we should be pretty ok, Saturday was a funny day, with very odd conditions and circumstances, so we knew that the time difference in qualifying was not real. The car has been handling well, it’s fast and I had a good feeling but obviously we need to finish the race. We still have some work to do.”

Red Bull:
Daniel Ricciardo: “Today was fun for me, it was so good to be back racing. I came on the radio more than once expressing my joy to just being out there competing. That joy was emphasized by having a good car underneath me. At the start we were able to pick cars off. We had good pace with high fuel on the Option and it was fun to be able to pass cars, I was enjoying that as always. I was sitting in a podium spot towards the end and I was hoping the tyres would last but I knew they weren’t going to hold and I would have to pit again. But fourth is still a good result and I’m happy we’re not that far off Mercedes and Ferrari. It was also good to see that Fernando and Esteban are okay. I haven’t watched the replay yet but I saw the car upside down so I knew it wasn’t a small accident.”

Daniil Kvyat: “I’m glad Fernando is OK, it looked like a very bad accident and it’s a relief to know that he is alright. In terms of my day, it looks like an electronic issue put us out of the race before it started. I think Australia doesn’t seem to be the luckiest place for me so far. The car just shut itself off – I guess it didn’t want to do the race today, but we’ll be back in Bahrain and we’ll start again from there! Last year it was very hard to take, not starting the race, but this year I’m a stronger person so I’ll be OK, these things happen, that’s life and that’s racing.”