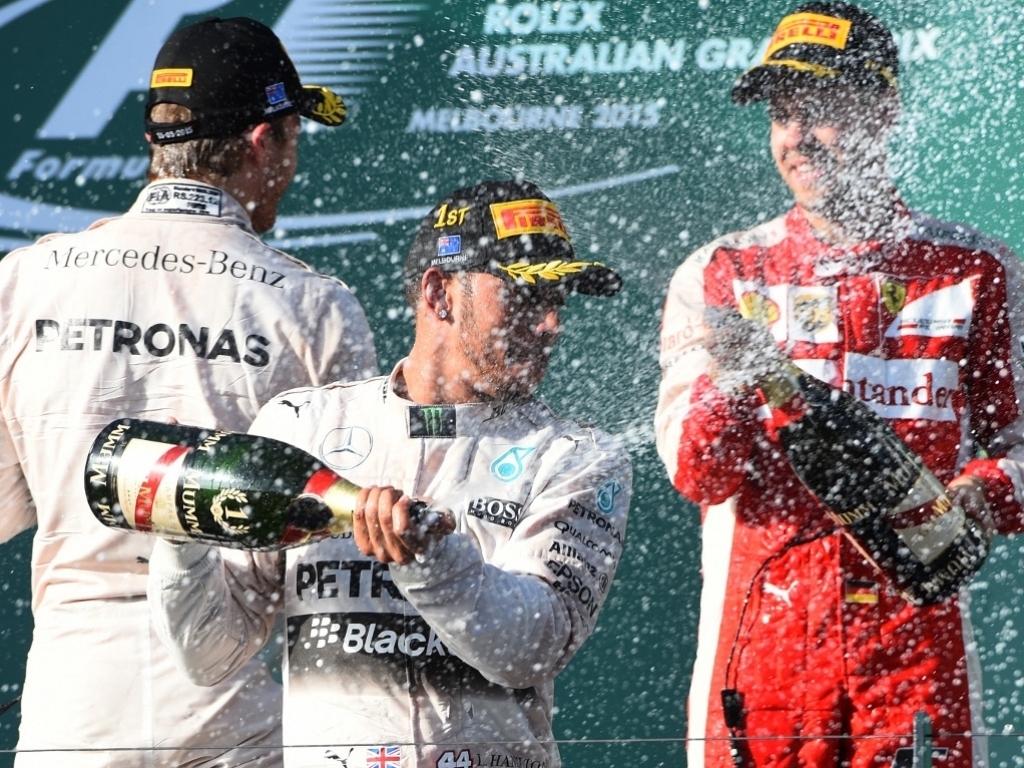 Mercedes:
Lewis Hamilton: "It’s quite unbelievable, really, what this team has done. It’s a great feeling to start off the season the way we finished the last and the car is just incredible, so thank you to the team. It was still a tough race, though, as Nico was very quick throughout. It was about managing fuel and also the tyres – trying to see how long we could push them. Once I’d built a two second gap it was about maintaining it. But when Nico turned up the heat it was tough. He drove really well and it’s a great result for the team to start the season with a 1-2. It’s good to see Ferrari back up here on the podium. I think they have taken a big step, so I anticipate a good fight with them this year at some point and we can’t back off. In fact, the podium was pretty awesome. I don’t often get star struck but I can’t believe I was up there with the Terminator! Anyway, we’ve learned a lot this weekend and there will be a lot of analysis to do before Malaysia. Hopefully we’ll keep finding ways to improve. Just because we had that gap today it doesn’t mean we’ll be cruising. There’s still a long way to go."

Nico Rosberg: "What a start for us. It’s great to have the quickest car again and what an amazing job by everybody involved. A big thank you to the guys back in the factories for all their work. Okay, so now it’s 1:0 to Lewis. He did a perfect job this weekend with no mistakes and improved a lot from Friday to Sunday. Yesterday after Qualifying I was already on the back foot and that’s difficult to change in a race against Lewis. I need to have a better Saturday, which I was able to do last year. But it’s still a long season with lots of races to go. I want to strike back in Malaysia, so that’s the focus. Thanks to everyone in Europe for waking up so early and for crossing their fingers for us – we’ve had fantastic support and it’s really great to see."

Ferrari:
Sebastian Vettel: "They did not play the Italian anthem on the podium, but we can be very pleased with this weekend. It’s a shame that a small mistake prevented Kimi from finishing the race but, in general, it was a very “clean” weekend. The most important thing is we have a good car, a real platform from which to carry on working. So thank you and congratulations also to the people who have worked hard in Maranello, as well as those here in Australia. Without them, this result would not have been possible. The start was not the best, there was too much wheelspin and when I tried to hold the inside line, my tyres were still too cold. We had a great race strategy, which allowed us to jump the Williams, which had a good top speed, at our one pit stop. Now we must confirm our performance in the coming races and then, one step at a time, let’s hope we can begin to close on the Mercedes. The gap is still big, but of all the teams, I think ours is the one that has improved the most over the winter. For a long time, I’ve dreamed of driving for Ferrari and it’s happened at the right time. I drank the champagne on the podium and I kept some for the guys in the team, because they told me they like it a lot… Thanks also to the fans. We have a great car, not just for qualifying but also for the race. Let’s hope we can get on the podium again and maybe even get a few wins!"

Kimi Raikkonen: "Shortly after the start, someone hit me from behind. Then I felt another contact on my right side, but I don’t think it was Sebastian’s car. The impact activated the anti-stall system and did some damage to the floor of the car. We were very quick in the race, able to catch the Williams and to fight for the podium: but then there were problems at both pit stops. I don’t know exactly what happened, but I know I lost something in terms of downforce. However, my team-mate’s podium is a great result for the team. Already in qualifying, despite my mistake on the quick lap, we knew we had a good car. And in the race, the gap to the Mercedes seemed less than on Saturday. It’s simply that, today, everything happened to me."

Williams:
Felipe Massa: "The aim of today was start the season with a solid points haul and demonstrate that we have a competitive car. We have managed to achieve much of what we wanted so this has been a positive start. The only disappointing part of the race was that I was jumped at the first pitstop by Vettel after losing a second and a half behind Ricciardo on my out-lap which was enough to lose the position. I have faith in the team and the car and we head to Malaysia knowing we are very much in the fight."

Valtteri Bottas: "I have done a lot of work since the issue with my back came in qualifying to get myself ready, starting treatment immediately, so the news that I couldn’t race today was obviously disappointing but I respect the decision. I now have two weeks until the next race to receive further treatment to ensure I will be back to full fitness and even stronger in Malaysia. I’m very eager to get back in the car and race because the FW37 is looking competitive and I’m confident we can fight for podiums."