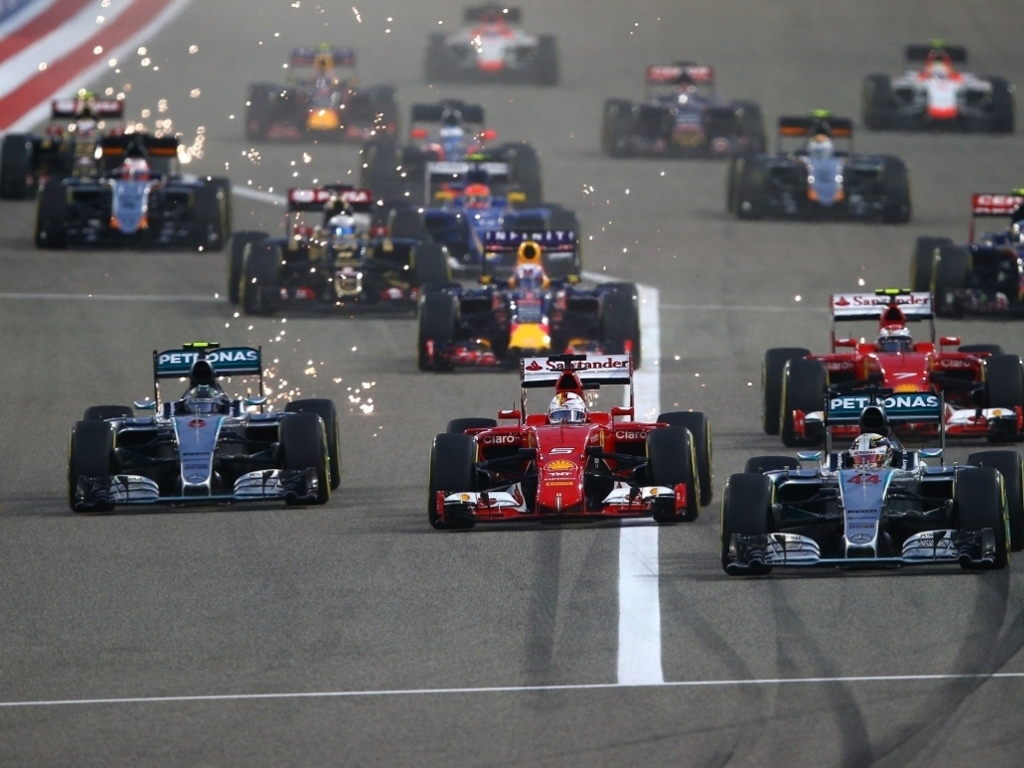 Mercedes
Lewis Hamilton: "I’m really happy with that. It doesn’t matter who it’s against – you always try to beat everyone. But it’s great to have a fight with Ferrari as well as Nico. Mercedes has been the best team on the grid for the last year or so but Ferrari are pushing us really hard now. It definitely wasn’t an easy win. It was close when I came out of the pits after the first stop and the battle behind me was intense. I had a bit of a slow stop which reduced my gap and when I was braking into T1 I saw them right there in my mirrors! From there I felt like I had it pretty much under control. I had to back off at the end with the traffic and the brakes but luckily for me the effect wasn’t as great as for Nico. I have to say a big thanks to everyone back at the factories and here at the track. The car was really nice to drive this weekend and they’ve done a great job. They won’t be 100% happy I’m sure as Kimi took points from us today. But it’s still a good haul of points and I know we’ll work even harder to do better at the next race. That’s what motorsport is all about and that’s why we go racing – to fight with other teams."

Nico Rosberg: "I felt very good in the car today and had a really exciting race. I was able to recover from my poor start with some overtaking manoeuvers on the red cars and I also tried to catch Lewis. But he also had good speed today so it was impossible to get by him. At the end it was very disappointing that Kimi got me, but I had no chance to defend my position with a brake-by-wire problem in the last two laps. I just went straight on at Turn One and that allowed him past, which was a shame. Anyway, we will investigate this now and with Lewis’ win we still got a strong result for the team once again, so I look forward to the next races with this great car."

Ferrari
Kimi Raikkonen: "After a difficult year last year and a beginning of the season that was a bit unlucky, it’s great to be back on the podium. I have mixed emotions, it’s a great feeling to be back, but we want to be on the top. The start was really good, I managed to pass Nico, but then I lost the position and there I lost a bit of time. The strategy was perfect, we did the right calls and the right tyre choice, I was happy with the car, we kept up a good speed through the whole race. In the last laps I was getting closer and closer and could see Hamilton, but the race was at its end, we would have needed more laps to try to do something. I think we are still a little bit behind the Mercedes but in some circuits and some conditions we can be very competitive, especially in the race. Today we did our best, we have to be happy with the result, we did the maximum and took some good points for the team. We keep improving step by step, we just have to keep working doing the same things in the same direction, and I’m sure we’ll get there."

Sebastian Vettel: "It didn’t seem to be the perfect day for me. I couldn’t get into the rhythm and lost positions when it mattered not to lose them for the final result. In general, I struggled a bit with the rear end and exiting the corners, which made me vulnerable to Nico’s attacks and prevented me from getting as close as I needed to Valtteri to chase him down the straight with DRS. Towards the end, I was struggling to get past in the fight against the Williams. When it was important to be quick, I always seemed to get stuck in traffic, and thus damaged my tyres. Overall, though, I think it has been another very positive weekend. It’s a shame I damaged the front wing in the race and I had to come in for a new nose, otherwise I think fourth place would have been secured, or even third. Anyway, that’s how it went. I was trying to push, and when you’re following another car you obviously lose a lot of downforce. With hindsight, it was probably more than I expected. I think I tried a bit too hard and ran wide. On the other hand, I am very happy for Kimi. I’ts good that he was able to pass Nico (Rosberg) towards the end. For the team, it’s obviously a great result. It’s a long way to go for the season and up to this point we can be very, very happy. It’s still a big surprise how good we are but there’s still a bit of a gap."

Williams
Valtteri Bottas: "I am pleased with the race and happy with fourth position. It was a real shame for the team that Felipe had an issue at the start. It was a lonely race but the final 20 laps were very tough. Sebastian was quicker than me, and closed up behind very fast, but the fight was really good fun. I know a few tricks that can really help to defend and they all worked today, and I am delighted to come out on top today."

Felipe Massa: "It was a frustrating day for me to have to start from the pitlane. The car struggled to fire-up and once under way I had a lot of positions to make up. A few laps in at Turn Four, Maldonado ran into the back of me and damaged something. From then on I really struggled with the rear and the car was very hard to drive. It was a difficult day but one point is better than nothing."