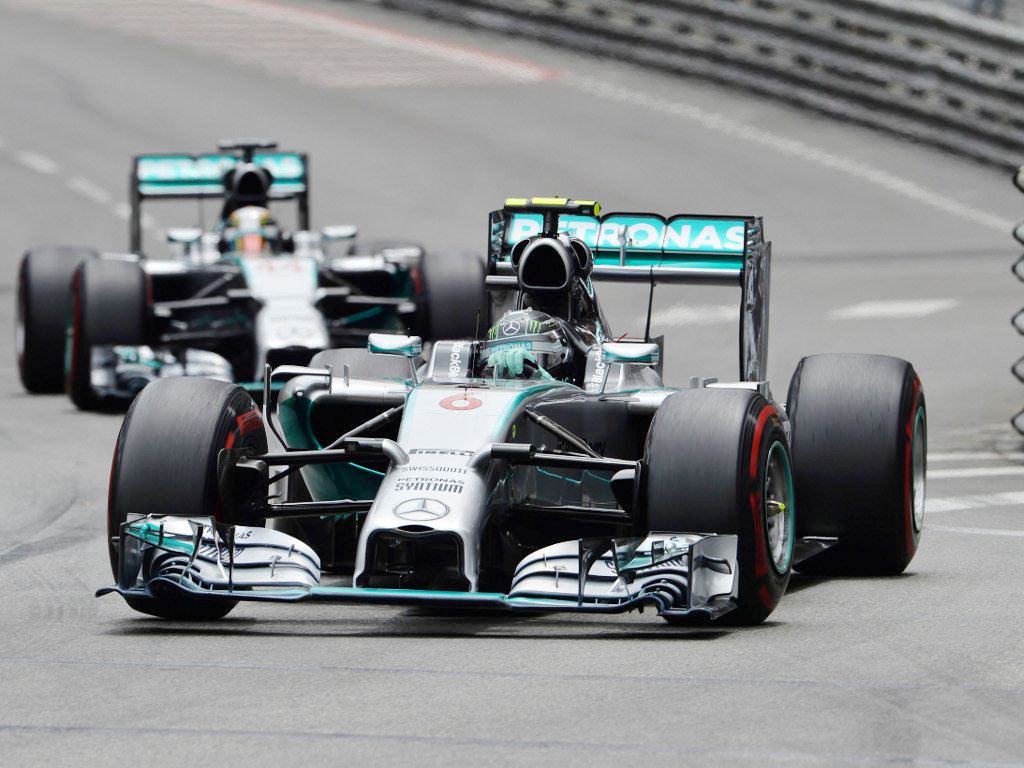 Nico Rosberg pulled one back against Lewis Hamilton as he beat his team-mate to the Monaco win. Daniel Ricciardo was third…

Mercedes:
Nico Rosberg: “It was a tough race out there today but I am absolutely delighted to have won my second Monaco Grand Prix in succession. It’s an amazing feeling and I’m proud to have done it at home, in front of my family and friends who were all here this afternoon. The race started well and I was comfortable but then we had to manage my fuel consumption and Lewis was pushing really hard behind me. We were able to be in control of the fuel with a few laps of lift and coast. It was important for me to break Lewis’ momentum of winning the last four races this weekend. That worked out very well, but it was a really tough weekend. I’m so happy for the team that we had another one-two finish and look forward to the party tonight!”

Lewis Hamilton: “I felt very strong out there today and I really drove with all my heart, giving everything that I could to improve my position. This just hasn’t been my weekend but I can leave today feeling happy that we have achieved another one-two finish for the team. We have such a great car and everyone who has worked on it deserves the incredible results that we are getting at the moment. Back to this afternoon, this is such a difficult circuit to overtake. I was following Nico as close as I could and had great pace but I just couldn’t get past. Towards the end, I got some dirt in my eye through the visor which made it very tough for a few laps but thankfully it cleared up and I was able to hold off Daniel and keep second place. This hasn’t been the greatest of weekends but I’ll go into the next race with even more energy and determination. The team are working so hard and we’re determined to keep the momentum going.”

Red Bull:
Daniel Ricciardo: “The race really came to life towards the end. It started off not so well and it’s a really short run to Turn 1, so that was frustrating. Then we got Seb due to his reliability and Kimi had a puncture and we sort of got back to where we were hoping to be. After the re-start we were just saving the tyres to the point that we could get to the end and then, with 20 laps to go, I thought they would be okay so I pushed. It was the first time in the whole race that I felt like I was really driving the car and we caught Lewis. It was fun but I couldn’t get him, so I have to say the race finished better than it started.”

Sebastian Vettel: “It’s disappointing. I had a good start and then we lost boost pressure from the turbo, so I had no power and had to retire. The team did everything they could. I felt quite helpless in the car, so I was asking for an answer of what we could do, but there wasn’t anything at that stage. We fixed some problems yesterday with the ERS, but some more came today with the turbo, but we will move forwards and it will be good for us soon.”

Ferrari:
Fernando Alonso: “Finishing just off the podium today was a good result, especially after a difficult start and the various incidents during the race. At the start, something in the motor didn’t work, but even if I’d had full power, there was no room to overtake. The three cars ahead of me deserved to be there as they were really uncatchable. I am pleased with fourth place, because we were able to manage a race in which you had to always maintain the highest level of concentration as there were plenty of tense moments. Our pace was good and that means that, bit by bit, we are improving. Sure, the gap to the leaders is still significant, because like us, they are still moving forward on the development front. Therefore we must always try to do better, starting with the next race in Canada.”

Kimi Raikkonen: “This was a very unlucky day for me, a real shame after getting a good start and managing to move up to third place. The car was handling well and had a good pace. Unfortunately, in a Safety Car period, my car was hit by Chilton’s Marussia and I had to make an unscheduled stop as my right rear tyre was damaged and that meant the end of any chance of getting a good result. I am sorry I still haven’t managed to get a good result because we are working very hard. We know there is a lot to do as our rivals are still a long way ahead, but I am sure that if we continue down this path the results will come, maybe with a bit more luck.”

Force India:
Nico Hulkenberg: “Ten points today is a great reward after such a difficult race. The last twenty laps were really tricky because my supersoft tyres were at the end of their life and it was hard to hold off the cars behind me and stay away from the barriers. There were a few close moments when I kissed the wall, but I survived and managed to hold on to fifth place. Fortunately my car was quick in the right places – going into the tunnel and also through the final corner. There were some enjoyable moments in the race, especially my move on Magnussen. He had to let the Toro Rosso back through and he lost a bit of momentum so I saw my opportunity to stick my nose down the inside of turn eight. On a track like Monaco it gives you a big smile to make the move stick.”

Sergio Perez: “I was in a battle with Nico, who was ahead, and I went to take the apex normally. I was on the racing line and ahead of Jenson [Button] when he clipped my rear wheel and spun me around into the barriers. I did not expect him to be there as there wasn’t really any space for another car there. It was very unlucky. As a racing driver you have good and bad Sundays but this is definitely one I want to forget as soon as possible. It is disappointing that we lost a big chance to score a good amount of points, but the car felt much better here than in Spain, as shown by Nico’s result. This is a very positive signal looking ahead to Montreal.”