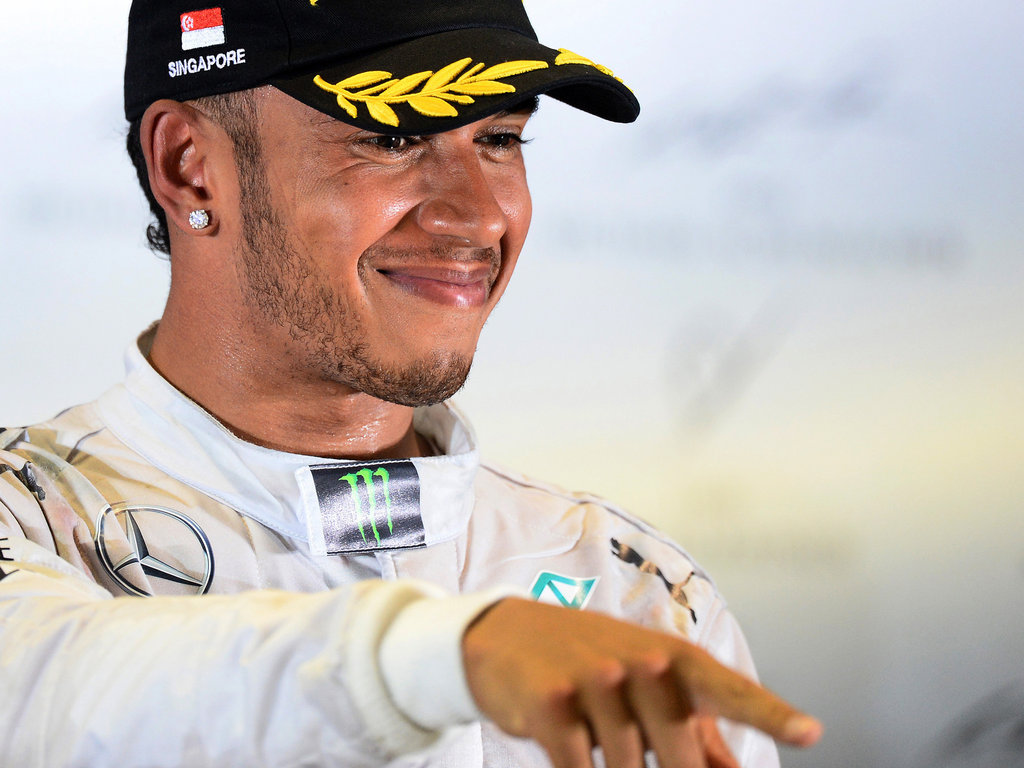 Lewis Hamilton salvaged the Singapore GP for Mercedes with a win as Nico Rosberg retired while there was a double podium for Red Bull.

Mercedes:
Lewis Hamilton: “It was great to come here after winning in Monza and start the final leg of the season with such a competitive car. It would have been a really hardcore race if Nico had been at the front, as we clearly had the pace. It was all running pretty comfortably until the Safety Car came out, which gave me some problems. I was driving hard to build the gap but then the tyres started dropping off and I wasn’t sure what to do – keep pushing or back off to look after them. So we pitted straight away and I came out behind Seb. But I knew they were on a two-stop strategy and that his tyres were old. I went for it down the back straight – the gap was pretty small and maybe I could have chosen another point on the circuit. But I luckily squeezed through and made it stick. Of course, it’s not an ideal result with Nico retiring, so that shows we still have work to do to get on top of reliability. But it’s been a great job from the team at everyone at the factories to make this mega car. Now we need to keep pushing hard for Japan in two weeks’ time.”

Nico Rosberg: “The problems with my steering wheel began in the garage even before the race and it was a difficult moment when I couldn’t pull away from the grid – the car didn’t get out of neutral. When I left the pit-lane, I was only able to change gear – there was no radio, no DRS and reduced Hybrid power. We were hoping that the systems might come back to life, like the radio did, and that we could change the situation. But after we changed the wheel another time, we had to retire the car. It was a tough day for me and unfortunately another reliability problem for the team. It was at least something good for the team that Lewis was able to take the win. Now we need to analyse what happened and to optimise everything further because reliability is our issue this year.”

Red Bull:
Sebastian Vettel: “t’s a circuit I like here, the atmosphere’s great and it’s a tough event. I had a good start and got past Daniel and had a decent race. We played a bit with strategy after we got undercut by Alonso, the safety car came at the worst time for us but we made the tyres work at the end which was tough. There was no point fighting Lewis at the end, he was on fresh tyres and I had to manage mine to the end as they were pretty old by then; that was the focus. It was nice to get the cold champagne on the podium.”

Daniel Ricciardo: “We were really close to the Mercedes in qualifying and we expected the race pace to be a bit faster today to be honest. We weren’t quick enough in the first stint and we had a few other issues going on, with brakes and some power issues that were coming and going, but in terms of points we still got a good handful to take away from here. It actually feels a bit like a home race here. Singapore to Perth is like Melbourne to Perth, so for West Australians it’s not too far. Suzuka is in two weeks and that’s another track we can be optimistic for, so I’m looking forward to that. All in all it was a solid weekend.”

Ferrari:
Fernando Alonso: “With hindsight, it’s easy to ask oneself how things would have gone if I hadn’t made a mistake at the start and the Safety Car hadn’t come out when it did, but overall I’m pleased with this weekend, because we were competitive and were able to fight with the front runners. Sometimes, a Safety Car can help but I think that today on this front, we were a bit unlucky, because at that moment, we were trying to make sure of second place and our strategy was good. We didn’t have much of an alternative, because if we had stayed out, the probability was that the stop for the Softs would have cost us more places. Even if in the end, I wasn’t able to get past, the fact we were competitive right to the finish confirms we have made a step forward. Now, in Suzuka, a real circuit, we will have a clearer picture of where we are.”

Kimi Raikkonen: “Today’s race was really frustrating, because despite the fact we were quick, we weren’t able to finish where we wanted. My start was good, I moved up a few places and everything was working perfectly. After the first stop, I lost a place to Felipe and from then on, I found myself stuck behind a Williams for the entire race. Unfortunately, every time I managed to get close, I lost aero performance on the rear and on top of that, tyre degradation was very high. It’s a real shame I was never able to run my race, even if we already knew that straightline speed is our opponents’ strong point. I’m not happy with eighth place, but on the positive side, we have seen improvements this weekend. I’m sure that if, from now on, we don’t have problems, things will go better.”

Williams:
Felipe Massa: “We changed the strategy from a three-stop to a two-stop after the long safety car period, and the final stint was pushing the tyre to the absolute limit but I managed to make it work. The grip levels were very low in the final few laps but I had a big enough gap to sixth place to ease the car home. Given the nature of the track, fifth was probably the best position we could have hoped for this weekend, but I am of course disappointed for the team that Valtteri’s tyres were not able to hold on until the end.”

Valtteri Bottas: “After the safety car we moved to a two-stop strategy and in the end the tyres just weren’t able to hold on. In the final lap I had a big lock up in the rear tyres when I was defending and after that I had no grip and cars could easily sweep past. I also had an issue with the power steering in the final stint and this made it harder to keep the tyres alive as I lost a lot of feeling in the car. If I hadn’t had this issue then I might have been able to go until the end. Obviously I’m disappointed not to finish in the points but we can take a lot of positives from this weekend as we looked competitive at a track that is less suited to our car and we have kept third place in the Constructors’ Championship.”