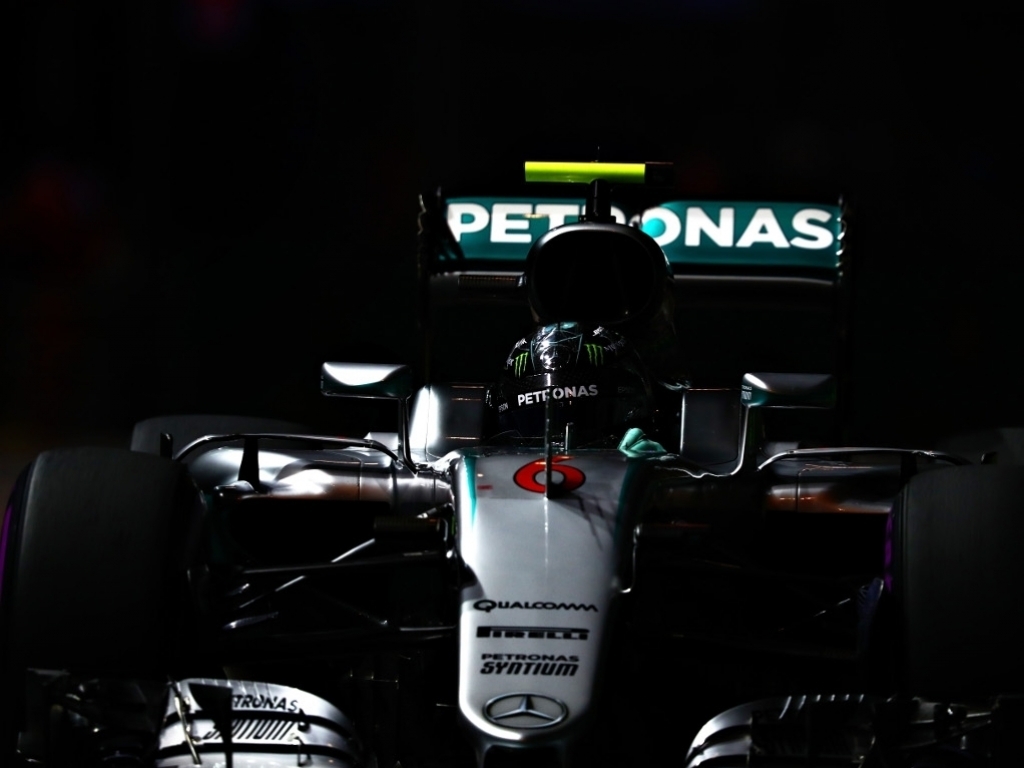 Nico Rosberg re-took the Champioship lead from his Mercedes team-mate Lewis Hamilton after his emphatic win at the Singapore Grand Prix.

Mercedes:
Nico Rosberg: "That was a fantastic weekend! In the past the Singapore track has not treated me so well, so this win is a very special one and an even more emotional one for me. The weekend started perfectly with a good qualifying session. Then, I had a good start and was able to keep the Red Bulls and the Ferraris behind me – both of which had beaten us comfortably last year. It was a bit tight at the end after Daniel (Ricciardo) did a clever pit stop timing wise. If I would have also pitted I would have come out behind him because I was stuck in traffic on my in-lap, so we chose the best strategy to stay out and a big thanks to the team for that. It's great that we learned from our mistakes last year and won at what is clearly a Red Bull track. This shows the competence and strength of our engineering group. I look forward to Malaysia now – but first I will definitely celebrate this win tonight!"

Lewis Hamilton: "A difficult day and a difficult weekend. At one stage it looked like I might even miss out on the podium but fortunately it didn't work out that way. It was an okay start. I didn't lose any ground which is a good thing after the last one. But then I was struggling so much after the Safety Car went in. The brakes were near critical temperature for most of the race, so I kept having to back off to cool them down. I then ended up making a mistake and ran wide which let Kimi past. Fortunately, with the car a bit lighter, I was able to bring the temperatures down, push a bit more on fresh tyres and get back past him in the stops. Pace and strategy weren't the issue – it was all down to the brakes. I was just watching the leaders pull away right from the start, so P2 was the maximum today. If that's the worst weekend of the year, I'll definitely take it. These things are sent to try us and now I'm just looking forward to the next one and a chance to give it another shot. I need a couple of strong weekends to get back to where I need to be."

Red Bull:
Daniel Ricciardo: “It was close today. We did everything we could and I thought it was pretty much a perfect race. The only thing that would have been better was to get Nico at the start. Then throughout the race I wasn’t really thinking about what happens when I catch him, I was just focusing on trying to catch him and put some pressure on. I knew his engineer had been on his radio saying: “Ricciardo is catching you, two seconds a lap.” It’s not a nice feeling to hear that, so I was just trying to keep on pushing and keep the crowd entertained. I pushed so much at the end on the supersoft and really tried to do something but it wasn’t close enough. I don’t really leave here with any regrets. Obviously we came here to win and we didn’t but I felt we left it all on the track.”

Max Verstappen: “I had a bad start, it wasn’t as bad as Monza but it wasn’t good, which is disappointing. I had a lot of wheel spin and then with Hulkenberg spinning in front of me, I had to brake even more which compromised my whole start. I got stuck behind slower cars in front of me and after three or four laps you lose the advantage and it completely destroys the tyres. I had some pretty intense battles which I enjoy but it’s tricky to pass here, so you do get a bit stuck. Dani and I fought quite hard, but we didn’t touch so that’s always a positive. I like overtaking, but I wasn’t fighting for a position that I would have liked so it’s not as much fun. We have to try and do better in Malaysia, but first we have to focus on getting the start where we’d like it to be.”

Ferrari:
Kimi Raikkonen: "It was a good and solid race, the car was behaving well and we had a pretty good speed. Obviously it was very difficult to overtake, but at one point Hamilton made a mistake and I managed to pass him, then after the pit stop he got the position back. We lost the place there, I don't know how and why they managed to jump us, and I don't know what would have happened if we would have stayed out. Now we have to go through everything, see what happened and what we could have done better. Today we gained one place from the starting position, but of course this is not the result we are looking for, we are trying to be in position to win, but we need to make the car a bit faster."

Sebastian Vettel: "We sure had a good strategy today, also we had the chance to make a big progress with a safety car, but it didn't come, so P5 is a very good result. Thanks to the team, I had been a bit down after qualifying yesterday. What nobody wanted to happen has happened, so we had to deal with it and move on. My start was not good, then there was the accident so I took it a bit easy; most important, the car was still intact, but after the restart it was tricky to get the tires working, I was on the primes, I lost quite a lot of time behind the Sauber, it was quite tough to get past, but then it was important to survive until we fitted the last set of Ultrasofts at the end, where we really could unfold the pace. In the last laps we had a big gap from the front and from the back, so I took it easy. I know patience is not a quality of the Ferraristi, it's not a quality of mine either, we are here to win and we're not satisfied until it happens, but we're progressing step by step and one day I think it will pay off. I believe in the team, and I believe that in the future it will be better."