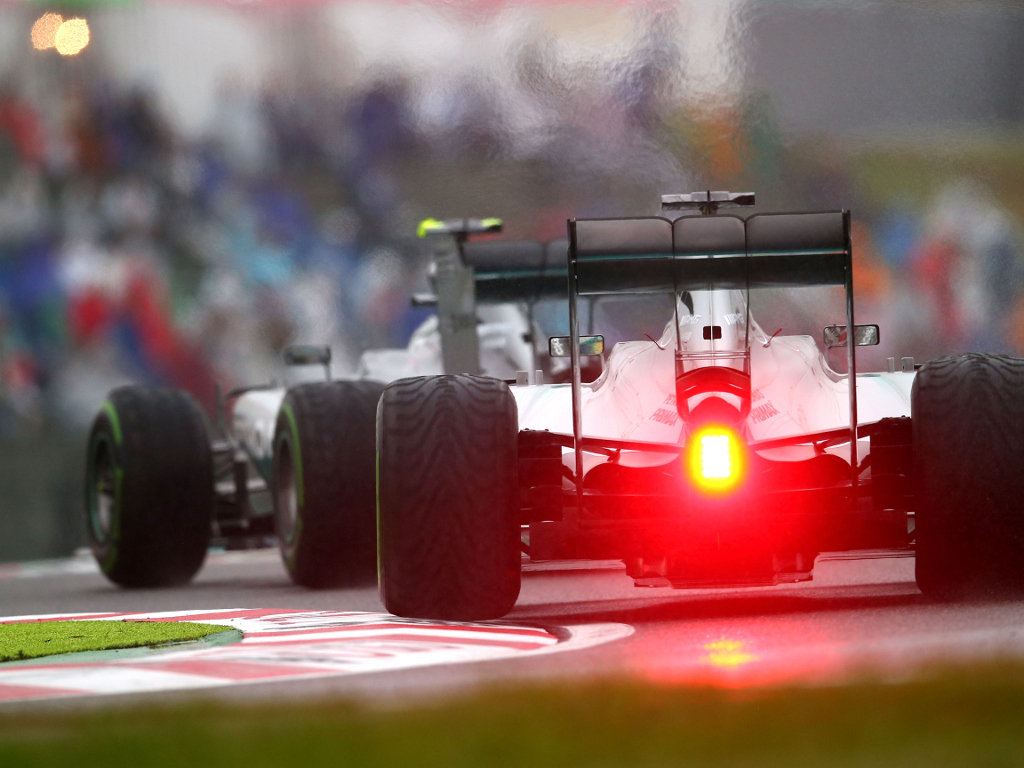 Mercedes:
Lewis Hamilton: “Our first thoughts go to Jules – it overshadows everything else when one of our colleagues is injured and we are praying for him. Next to this, the race result doesn’t seem significant at all. Nico and I had a tough battle, we were pushing really hard. I had a big moment at Turn One when I was too late getting off the DRS as I was just pushing so hard but fortunately I was able to get back on track. The conditions were difficult throughout but I had more pace than Nico today and could follow him quite comfortably in the early stages. This is not an easy circuit for following another car or for overtaking, but he made a mistake out of the last corner and I was able to pass. The whole approach then needed to change to look after the tyres and make sure I stayed in the lead until the end of the race. But like I said, that’s not what matters today; our thoughts are with Jules.”

Nico Rosberg: “My thoughts are with our colleague Jules and his family and team-mates, and we are hoping for some positive news. Today was a really tough race with the wet conditions. I struggled a lot with the balance of my car on the intermediate tyres, so I had to push hard to keep Lewis behind me. I had a lot of oversteering which is why the rear end of my car was very nervous. That was really strange and I didn’t have the necessary confidence in the corners; we need to look into that in the next few days. It meant that Lewis was quicker today and deserved the win. It was damage limitation with losing only seven points to him. For the team it was a good result with another 1-2.”

Red Bull:
Sebastian Vettel: “Everything that happened with the racing on track is secondary today, one of us is in a bad shape and we don’t yet know how he is. Jules had a bad accident and we hope to have some very good news, very soon. Not knowing what’s going on feels terrible, I think all the drivers really feel with him, as we know how difficult and slippery it was today; we hope for the very best.”

Daniel Ricciardo: “Right now we’re all thinking about Bianchi and that’s the biggest concern for us. We heard he had a pretty big crash and it’s not nice when we don’t know if the driver is okay. The race was tricky, it wasn’t going too badly and the set-up we had for yesterday paid off. We tried a few different things with the strategy, but Bianchi is my main concern at the moment.”

McLaren:
Jenson Button: “For me, the race doesn’t really matter today. I haven’t seen anything of Jules’ accident, but the most important thing to say is that all our thoughts are with him, his family, and his team right now. It’s an accident that you hope never happens in Formula 1.”

Kevin Magnussen: “Let’s really hope that Jules is okay. It’s such a bad feeling when something like this happens, so let’s hope and pray for him. We did the best we could today, but we had an unfortunate problem with the steering wheel, which basically dropped me out of the race. I tried my best to come back, and get some points, but unfortunately it wasn’t possible to do so.”

Williams:
Valtteri Bottas: “It was not an easy race for us today, however we still got some points which is good. The car wasn’t great in the wet but we made the most of the strategy and extracted what we could. We are missing pace in the corners and so conceded a lot of time. It was a surprise to see the Red Bull so quick, in the dry we would have fared better. I really hope Jules is ok after the incident and that it is nothing serious.”

Felipe Massa: “The race was very difficult today, I suffered at the start with aquaplaning and towards the end it started to get dark as the rain fell again. The Red Bulls were too fast for us today, especially on the intermediate tyre, so there was no chance we could defend. My main focus at the moment is that Jules is ok though.”