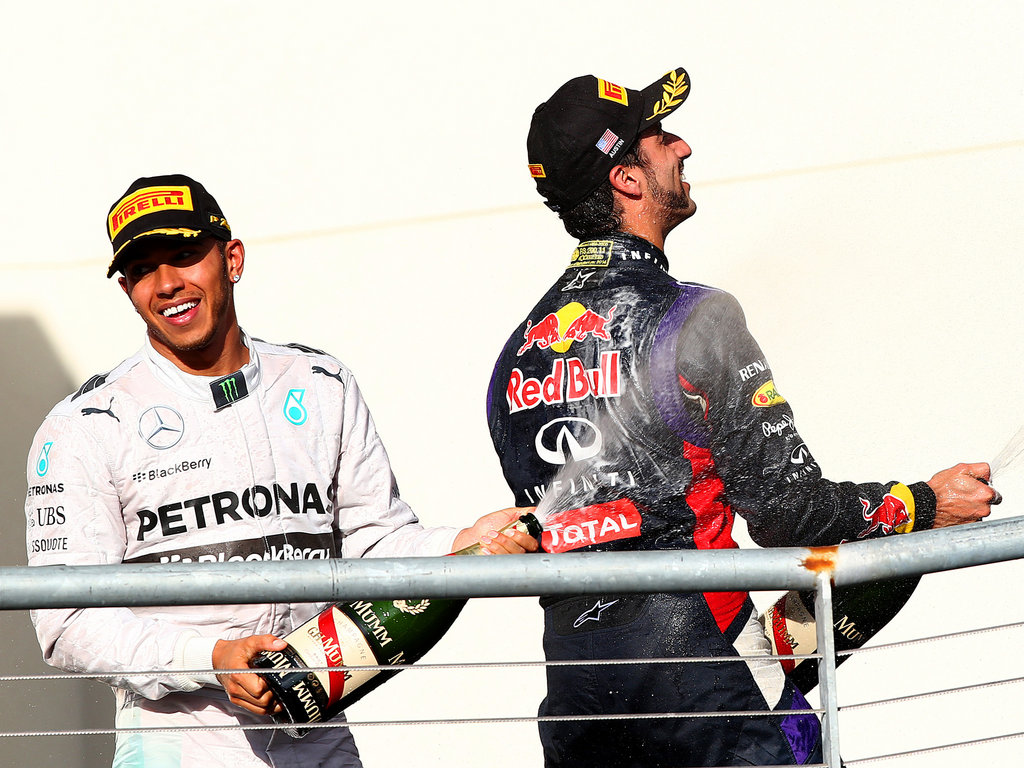 Mercedes
Lewis Hamilton: “What an incredible place this is to go racing. We have such great support here and I have to say a massive thanks to the fans who have been awesome all weekend. I’m really grateful to have had the opportunity to be out front here. It’s a very special feeling to have such an amazing car, an amazing team and to be on this incredible run. It’s been an unbelievable job from the team all year so a big thanks to everyone here at the track and at the factories back home. We managed to correct the problems from qualifying today which was great and I pushed as hard as I could. For the overtake, I just stayed as close as possible to Nico and waited for the moment to be just close enough to throw it up the inside. This is a good circuit to be able to follow another car but it’s still not easy. You have to judge the risk in these situations but I felt confident I could pull it off. Once I got past Nico, it was just about controlling the race. I’m very, very proud to now hold the record for the most Formula One wins for a British driver. I have to say, though, it’s all thanks to the team and the car we have this year that I’ve been able to reach that landmark so quickly. Ten wins in a season is just… well, wow!”

Nico Rosberg: “It was a tough day for me and it feels horrible to finish second after starting from pole. The conditions were very different compared to yesterday and it took me too long to find my rhythm at the beginning. In Formula One it is all about adapting quickly, but it just took me too long. Only 10 laps after Lewis passed me, I got it right and was able to push much more. Lewis just did a better job today, so congratulations to him. It’s getting tougher but there is still a chance for the title and everything can happen. I’m still going to be pushing flat out just as I always have. I never give up.”

Red Bull
Daniel Ricciardo: “I’m happy with that. I could see the Mercedes for the first part of the race which was really cool, I don’t know if they were just chilling, but we seemed to have good pace. It was great to get ahead of the Williams and to get onto the podium. The start wasn’t very good, I have to put my hand up to that one, but the recovery was good so we didn’t really lose out. The pit stops were really good, Red Bull is known for being awesome in the pits and they showed it today.”

Sebastian Vettel: “The first half of the race wasn’t so good. The second half it came more alive and we were able to make up some ground with a pit-stop near the end of the race. We decided to go for fresh tyres with only a few laps to go, so we were in a stronger position at that point compared to others who were struggling on older tyres and the pace was better. The low downforce set up was good for passing, but it made it difficult to stay close to people.”

Williams
Felipe Massa: “I had a very good start to get up to third place and we showed strong pace throughout the race, but unfortunately a slower than normal pitstop allowed Ricciardo to jump me and this could have cost us a podium which was possible. These things happen though and the team have been operating at a very high level with pitstops this season so we need to quickly move on from this one. On the whole we need to see this as a positive weekend as we have scored more points than our rivals in the Constructors’ Championship and we have good momentum for the final two races of the season.”

Valtteri Bottas: “Overall we have managed to secure some good points and increased our lead over Ferrari for third in the Constructors’ Championship, but there are a number of things we can learn from today. I had a bit of clutch slip at the beginning which allowed Ricciardo to jump me in the first corner. The Red Bull’s also had better tyre management and could run at a better pace for longer, so that made it difficult to catch Ricciardo after he jumped me at the pitstops. At this point in the season we’re trying to maximise our points haul and this has been a solid result that puts us in a good position headed into Brazil.”