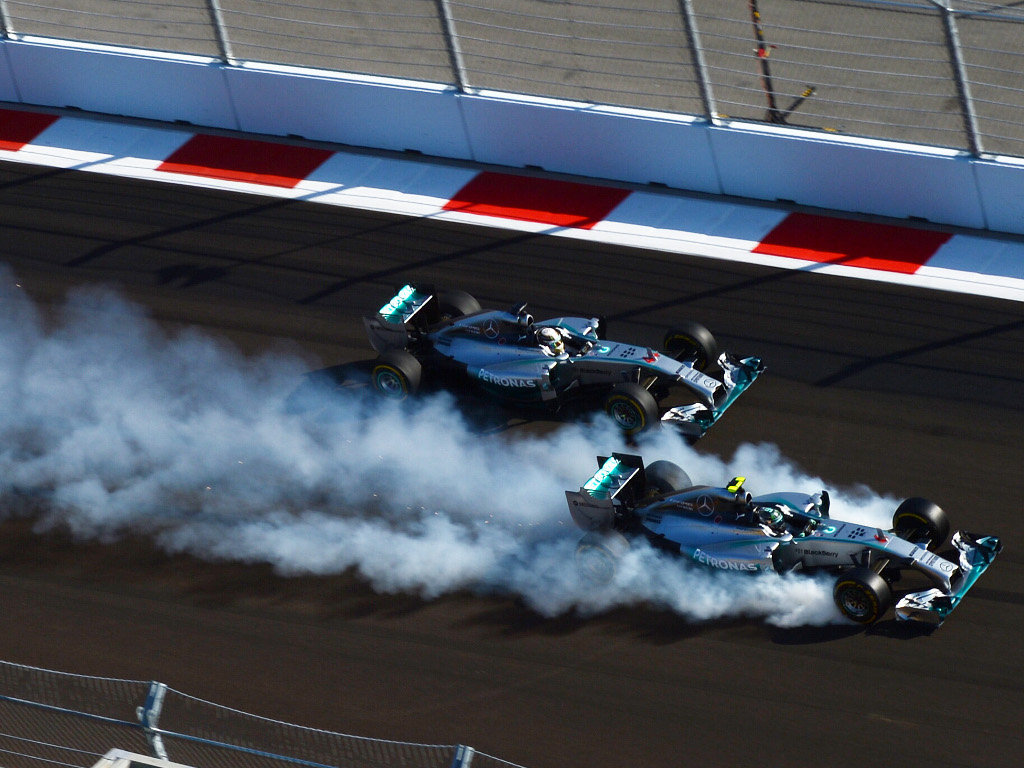 Mercedes:
Lewis Hamilton: “It was a good day and an amazing weekend. Firstly I’m so proud to have contributed to the work of this great team, to get the first Constructors’ Championship for Mercedes-Benz is a huge achievement. Massive congratulations to the guys back in the UK and Germany, it’s history for us. Today I had to manage the tyres a lot through the race; managing the fuel wasn’t too bad. The car felt great and I didn’t have to push too hard. At the end, when Nico was behind, I needed to match his times, which I did. I’ve thoroughly enjoyed the weekend here in Russia, it’s a great place. It’s been one of my favourite venues so far this year, so it’s very cool to have won the first race here. The fans have been amazing; I didn’t know so many people followed it here but they were all there in the grandstands and looked excited! The organisers have also done a great job – the layout, the surface and the whole event; I take my hat off to them.”

Nico Rosberg: “We are World Champions! I feel so happy for the team and the whole Mercedes-Benz family, today we made history. Thanks to everybody for their efforts, also thanks to the husbands and wives to send us your partners to make this happen. I remember well the hard times we had in this team. So now it’s great to be so dominant in our sport. But I’m also divided. Today was a really tough race for me. I just messed up in the first corner. I simply braked too late, which was unnecessary. So I flat spotted my front tyres and it was impossible to continue due to the vibrations. I had to pit, and on the prime tyre I had great pace. In the middle of the race I thought the degradation would start to increase. But very soon it was stable and I was able to push a lot. Then I managed to overtake Bottas. Also still at the end I was able to push, but the team asked me to control the pace as everyone was worried about dropping at the very end of the race. P2 was damage limitation. I really look forward to the last 3 races of the year with this outstanding championship car.”

Williams:
Valtteri Bottas: “We went into the race today with the mentality that we were going to fight Mercedes for the win, but their pace in the race surprised us a bit and in the end we need to be satisfied with third place and another podium. I was keeping pace with Hamilton at the beginning but in the middle of my first stint the rear tyres started to go away and that allowed him to create a gap. In the second stint I didn’t realise Rosberg was quite as close as he was and his move caught me a bit by surprise, but he had more pace at that point anyway as my prime tyres were taking a good ten laps to switch on so he would have caught me regardless. I was closing in the final laps as my tyres were getting better but he had managed to create too big a gap. I’m very happy to be in fourth place in the standings and we have some great momentum heading into the US Grand Prix.”

Felipe Massa: “My strategy today was undermined by traffic and that prevented me from getting in the points. We decided to stop on the first lap and after that I was in clean air and had good pace on the option tyres so made up a good number of positions. I then came up against Perez who had strong straight line speed so I lost a lot of time behind him. After my second stop I soon found myself behind Perez again and I didn’t really have any good opportunities to take a risk and pass him. Of course it’s disappointing to finish 11th when we had a very competitive car, but we are looking strong at this point in the season so we need to focus now on Austin and making sure that the race is problem free.”

McLaren:
Jenson Button: “Well, that wasn’t a bad day at all – I reckon we got the maximum out of the car. I had a little scare at Turn Three on lap one, when Fernando [Alonso] and I got very close to each other, but apart from that it was a pretty straightforward race. It was odd that we were able to run so many laps on a single set of tyres today. The Primes [tyres] felt like they could have gone on for ever – it was a bit like going back to ‘old school’ racing in that respect. The track surface is in Austin [Texas] is very similar to the track surface here, as it happens, so I look forward to seeing how we fare out there in terms of tyre wear. It’s been a tough year for us but over the past few Grands Prix it’s been clear that we’ve been improving. Today’s result, fourth and fifth, is the best we’ve had for a little while, and the 22 World Championship points that Kevin and I scored are very welcome from a Constructors’ World Championship point of view. Having said that, unless you’re standing on top of the podium, you always want more; that’s the Formula 1 mindset. But believe me: we got the maximum out of our car today, and our race pace was good, but better results still will come soon enough.”

Kevin Magnussen: “I decided to go flat-out from the start, in an effort to make up as many positions as possible from my P11 grid slot, and it worked; I had a great lap one, and then moved up to P5 very quickly. After that, though, it cost me dear because I had to do a lot of fuel-saving, especially in the second half of the race. Even so, it was a pretty uneventful afternoon for me. It was almost like a chilled-out Sunday drive, in fact, because I was easing off the power 200 metres before the corners in an effort to save fuel. I was really surprised that no-one was able to catch me, in fact; I guess the guys behind me must have been experiencing the same problem. Overall, therefore, I was pleased to finish fifth – and for Jenson to qualify and finish fourth was a great result in two ways: it meant that together we scored a lot of very valuable Constructors’ World Championship points and it also showed that our car is steadily improving. So it’s been a good weekend. We’ve been a bit quicker than we’d expected to be, which was great. Now we need to push really hard so as to carry that improved form forward for the rest of the season.”

Ferrari:
Fernando Alonso: “Today’s race followed the pattern set in the earlier part of a weekend in which we didn’t manage to be competitive, even if the car worked well from start to finish. The entire race was particularly demanding from the point of view of managing the fuel consumption and especially in the closing stages, I had to save fuel. During the pit stop, the front jack didn’t work, but I think that even without this problem, I’d have finished in the same position, because the McLarens were faster. We took a risk at the start because we knew it was an opportunity to make up some places, but after that, my race pace was what we’d seen to date and it wasn’t possible to do any more. We have not picked up many points, but we will continue to give it our all in the last three races, because third place in the Constructors’ championship is still a possibility, even if at the moment, the most important thing is to get some good news about Jules as soon as possible.”

Kimi Raikkonen: “We knew we could expect a very demanding race and that starting from far back it would not be easy to move up the order, but at the start we did very well. Unfortunately a Toro Rosso squeezed me towards the wall once we were on the straight. Because I had to brake hard, various cars passed me and I lost any chance of having a good race, because from then on I was always stuck behind other cars. The car handled well and with a clear track I had a good pace, but we lacked top speed with which to try and overtake on the straight and having to save fuel meant I couldn’t push as hard as I wanted to. We are aware that this year it’s hard to fight for the top places, but all the same, we will continue to try our best, starting with the very next race in Austin. That track is very demanding and interesting and I hope I don’t have the same problems I had here, so that I can aim for a good result. However, what I wish for most is that all our prayers help Jules at this difficult time.”