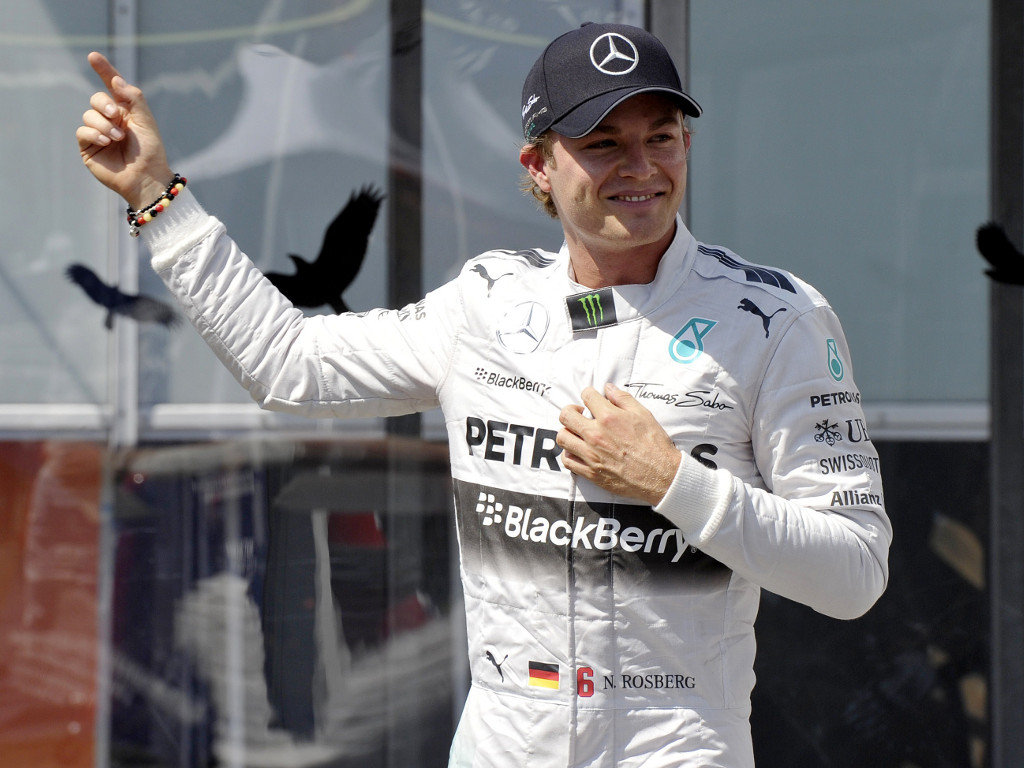 Nico Rosberg was back to winning ways in Germany as he romped to an easy victory ahead of Valtteri Bottas and Lewis Hamilton.

Mercedes:
Nico Rosberg: “Wow, what a great day after so many great events for me this week! I came here hoping for a win and it worked out perfectly. My Silver Arrow was so dominant, thanks to the team for this fantastic car. Before the race I was worried that without the FRIC system the gap in the race would be smaller. But we were again the quickest out there. I did a two stop strategy, which was difficult to manage at the end of the stints as the tyres were almost gone. I’m so happy for Mercedes; it was the first win for many many years in Germany. Thanks for the support here at Hockenheim, the fans were amazing to me. Also at the start I saw a Mexican wave, which was great. Now I look forward to Hungary.”

Lewis Hamilton: “First of all, congratulations to Nico on winning his home race; it’s a special feeling and I am very proud that we could put both cars on the podium for Mercedes-Benz in Germany and represent for all the Mercedes employees and fans here this weekend. From a personal point of view, I can’t be too ecstatic about the race because it has been a tough weekend for me and I’ve ultimately lost more points to Nico in the championship battle. But I’m grateful that I could limit the damage with a podium finish. When you are sitting on the grid basically in last place, with no other cars in your mirrors, it’s very hard to imagine that you could be standing up there two hours later. I’m so grateful to the team for this car, I really take my hat off to them for building a machine that can put in that kind of performance. To be honest, it was a pretty straightforward race for me, although I had some trouble following what was going on and where I was running at times. I had a nice battle with Kimi early on, when I was lucky not to damage the front wing, then the incident with Jenson was just unfortunate. He has been such a gentleman this year and not given me too much trouble getting past but it was just a misunderstanding today. I wasn’t close enough to try and pass but I was on the inside line in the corner. It looked like he had gone wide, then he cut back across the corner and perhaps he didn’t see me there. I lost quite a bit of downforce with the damage and it made it very hard to look after the front left tyre. I had a lot of understeer and the tyre was degrading fast, which is the reason why we converted from a two-stop strategy to three. Then the team called me in early on the first set of option tyres because we expected a Safety Car to come out – and I was surprised that there wasn’t one, to be honest I caught Valtteri pretty fast in the final laps but he just had too much straightline speed to get past. I’m doing absolutely everything I can to get back on level terms with Nico in the title battle: I can’t focus more or work harder than I am doing right now. This championship is proving a big challenge for me but that’s how I love it – and I wouldn’t have it any other way. ”

Williams:
Valtteri Bottas: “I am really happy with the way the race went today. As a team we have been unlucky not to have both drivers on the podium as we had the pace. To keep a Mercedes behind at the end of the race was promising showing that it is possible, and the car is very strong. The engineers shared a lot of information with me about the tyres and where Hamilton was and that team work was the key to the good result.”

Felipe Massa: “Luckily I am ok but I am not happy. I was in front going into the corner, and so to have another race ended by another driver is not easy. I am doing my best, the team are doing their best, and we just aren’t getting the chances we need. Going into the first corner I was near to Valtteri but had to back off to stop an accident, sadly some others didn’t do the same. I am obviously very disappointed. Well done to Valtteri, it shows we have the car to get on the podium.”

Red Bull:
Sebastian Vettel: “It was fun with Fernando today – we started maybe where we left off in Silverstone! It was quite entertaining the first half of the race and at one point it was quite tight with both the Ferraris, but we managed to stay ahead. The second stop was a bit too close and Fernando was able to pass without too many difficulties, which put us on the back foot, but we decided to be a bit more aggressive towards the end and make sure we got the undercut and then we could put some gap between us, which was crucial for us as we were quite tight in terms of fuel towards the end of the race. I think that was the best we could get today. Daniel just missed passing Fernando at the end unfortunately.”

Daniel Ricciardo: “That was awesome fun, one of my most enjoyable races I’ve had. I mean, not on the first lap, obviously, that was just the wrong place at the wrong time. I wasn’t as worse off as Massa and hopefully he is okay. I was on the outside and the collision happened, I had to avoid it and went pretty far down the field, I don’t know exactly how far back. From then on I just got on to the radio and said let’s make an amazing recovery and make ourselves proud today. And I think we did that, we fought hard and we didn’t leave anything on the table. These are the moments and battles that I personally thrive off and enjoy. Fernando is known to be a tough racer and I thought who better to have a good fight with. I was on the Primes and he was on fresher Options and I gave it the best fight I could and, well.., nearly!”

Ferrari:
Fernando Alonso: “We did what we could today and even if as always, we were aiming for a podium finish, the cars ahead of us were just too quick. It was a good race, even if it was very complex, as we decided to change from a two to a three-stop strategy. It was not easy fighting while also keeping an eye on consumption and in the end, with the help of newer tyres, getting ahead of Ricciardo meant we finished in the highest position that we were capable of. Here in Hockenheim, we made a small step forward and even if that didn’t translate into lap time, it encourages us to keep trying to improve. The aim is still to score points to help the team in the Constructors’ Championship. So now our thoughts turn to Budapest. We will only find out how things will go once we are there, because every circuit is a story in itself.”

Kimi Raikkonen: “It’s a real shame the way my race went, because this weekend, I felt more comfortable and today, on fresh tyres, I was going well. Unfortunately, twice I found myself squeezed between two cars and on both occasions my front wing got damaged and that compromised my race. Tyre performance dropped more than expected and I had graining on the front left and was losing aerodynamic downforce. On the positive side, I was able to drive the way I like today. I am sure that, but for these problems, things would have worked out differently and I would have been able to finish in the points.”