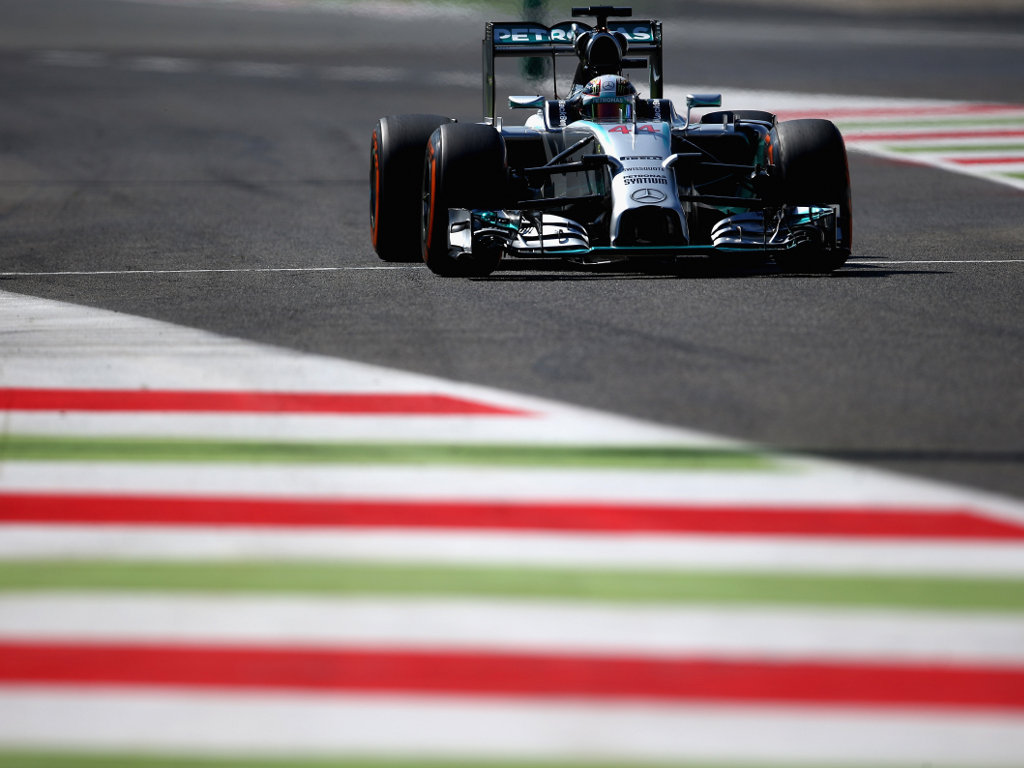 Mercedes:
Lewis Hamilton: “Firstly it was amazing to see the straight completely filled with fans from the podium today. You make this race and thank you so much for your support! Big congratulations to the team for our performance this weekend. We said we wanted a one-two and we got it today; this result is important for everyone. It was a difficult race for me though. The launch sequence didn’t engage properly for the formation lap and then again for the start. I tried to pull away as fast as possible, basically I just floored it and hoped for the best! Fortunately I didn’t lose too many places and was able to get past Kevin, then have a good battle with Felipe. When I closed up to Nico, I didn’t want to hold back as the car felt good and I knew from experience that the only chance would be at the start of the stint when the tyres were fresh so I went for it. I’m really pleased with the win, it’s feels like I have some momentum back as we go into the final races.”

Nico Rosberg: “Lewis was quicker this weekend, so he deserved the win. That for sure is very disappointing for me. I had a lock up in Turn One and I decided to go straight to avoid a flat spotted tyre. That cost me the lead. But he was very quick behind me, so I had to push all the time. But I need to see the positive things from today. Second place is still good and I lost only seven points to Lewis, so this could have been much worse. It’s also a great result for the team, the first 1-2 since Austria. So I’m happy for everybody in our team and I have to thank everyone again for this great Silver Arrow. We were the strongest team at this unique circuit. The Tifosi created a great atmosphere for us on the podium; it was all red all the way down the straight. That was great to see. Now I look forward to Singapore, I like the track and I have great memories from last year.”

Williams:
Felipe Massa: “t was a fantastic race for me so I am really happy. I had a good start and passed Magnussen at just the right time. I had to work hard to establish that position, sadly the Mercedes were still a bit quick, so we did the best we could. Monza is a special podium, and to hear the fans sing my name was amazing.”

Valtteri Bottas: “I had a few issues at the start which really effected how my race went. Once the tyres were up to temperature I had a lot of work to do. It was good fun to overtake so many people and we had some good pace as well. As a team we had a really good day and it was good to overtake Ferrari. I’m pleased to see Felipe get his first podium of the season, hopefully we can be up there together soon.”

Red Bull:
Daniel Ricciardo: “The strategy helped today, it kept the tyres fresh enough to go those extra few laps at the end. I saw the cars in front of me pit and the pace was still good enough, so seeing that we didn’t have great pace when we were out of position then we thought we would try something different and that’s why we went long, which helped towards the end of the race. I was more comfortable with the prime tyre and was able to do some good moves, which kept me smiling. The start wasn’t ideal, it’s one of the longest runs up to Turn One here from the start line and it’s not a place where you want to have a bad one, but I dropped the clutch and didn’t get the traction, so we will have to look at that, but we kept a cool head and picked our way back through the field. I think fifth, even with a good start, was the best we could do.”

Sebastian Vettel: “I think that was the most we could do today. On the primes we weren’t able to look after the tyres as well as we wanted to. The target is to get back to the front, at the moment the gap is quite big but we will have to work hard to close it again. We have had some difficulties this year, but they can only make us stronger if we learn from them. In terms of strategy we wanted to get the McLarens so we went aggressive with the early stop, but the tyres started going off at the end and all in all that was what we could do today.”

Force India:
Sergio Perez: “The race was a lot of fun. We were always fighting somebody and always pushing hard. It was great racing and it’s good to score important points for the championship. The most important part of the race was the fight I had with Jenson, which was really nice and reminded me of the old days. I know he is a driver that you can fight really hard and it’s always clean. At the end of the race with Kevin, I knew he had a penalty and there was no need to attack him. It meant I could focus on keeping Jenson behind me, which was not easy.”

Nico Hulkenberg: “It wasn’t a very busy race for me. I was racing alone most of the time and just doing my own race: not being towed around or benefiting from DRS made it a bit harder. I had a very good start, especially considering I was on the hard tyre, but I lost contact with the cars ahead of me quite soon because they were on the medium and I didn’t really have the same pace. It was quite difficult to manage the car, especially the rear end: I had some oversteering and it was tricky to drive. I pitted quite early as I wasn’t going anywhere on my hard tyres and we saw a good opportunity to jump people, but we still found it difficult to deal with the balance. We need to look ahead now to Singapore and work to bring more performance to the car. Singapore is a track we all enjoy: everything – the track, the atmosphere, the setup – is special.”