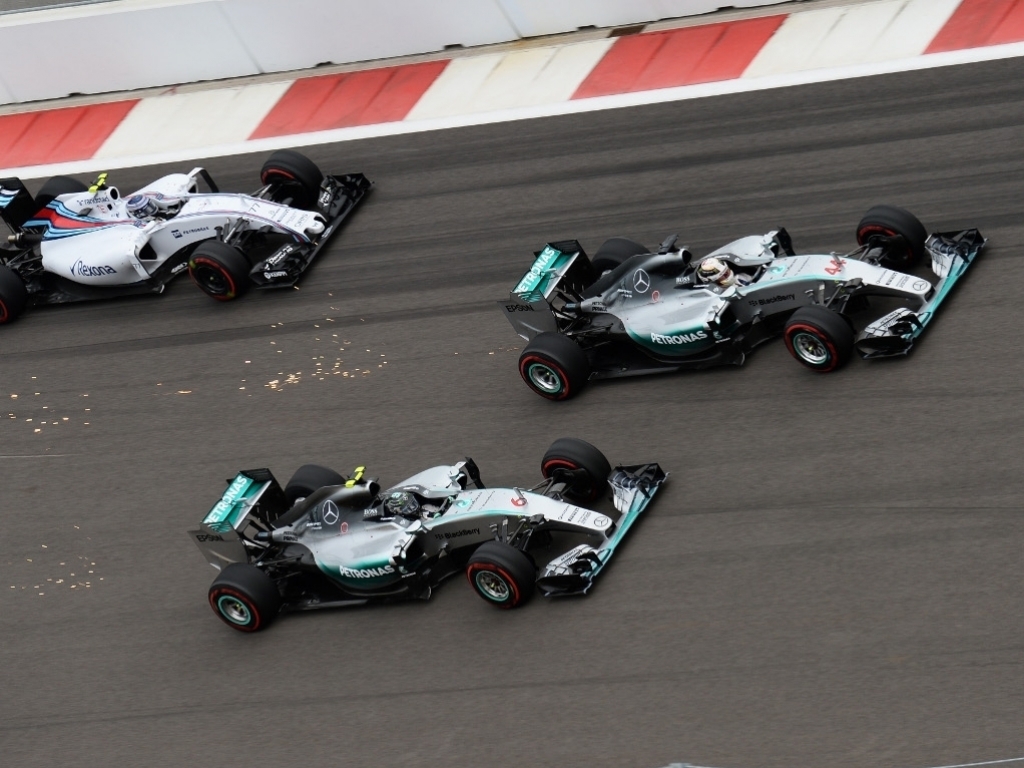 Lewis Hamilton edges closer to the 2015 Drivers’ Championship after Nico Rosberg is forced to retire while Sergio Perez was on the podium.

Mercedes
Lewis Hamilton: “It’s just an amazing feeling today. I have a huge admiration for this team. Driving the car through that race, it just felt so good and this is what I’ve always dreamed of having. Even though you’re in the front, it’s still a hard race to stay in the zone and not make mistakes. We were only doing a one-stop, so you’re trying not to lock up and damage the tyres. I felt like it was a big challenge today. It’s a shame I didn’t get to race with Nico, which I was really excited about. I’m glad my car made it as the rear wing was getting a bit loose towards the end, so I had to stay off the kerbs and try not to damage the car. I’ve got to enjoy what’s going on now and cherish the moment; there are still lots of points available this year. To get the Constructors’ Championship feels very special and a great feeling to be a part of this and to have contributed to the team’s success. It’s really an amazing feeling and I’m very proud of them up there on the podium, to see all their smiling faces. I feel like a small part in the chain of many people; I’m proud of that part and I look forward to seeing the whole team tomorrow at the factory. I knew the guys were going to do a good job this year but they’ve done an even better job this year than last, which is phenomenal.”

Nico Rosberg: “Racing can be very tough. You put so much effort into a weekend but in the end I leave Russia with no points. A very disappointing weekend for me. It all went well until the Safety Car came out. My throttle pedal came into my direction. At one point I wasn’t able to steer anymore as I had to lift my foot too much and touched the steering wheel with my knee. In the recent months I had some unlucky moments, which made it hard in the battle against Lewis. But I will come back and keep pushing. We can be very happy that we secured the Constructors’ title a second time in a row. So it’s a good day for everyone in the factories and we have to thank all that made this happen.”

Ferrari
Sebastian Vettel: “Overall I am very happy. It was a great day, a great race and I felt really good in the car. In particular I am very happy for the Team, they have done a great job, after the lacking practice the days before. My start was not so good, I struggled a little bit, but as the race went on I fought my way to the front. After the safety car came in I could overtake Kimi and start the hunt for Williams. As for my fight with Kimi, first of all I think we both enjoyed the battle that since it was still so early in the race, it was right to let us fight to provide some excitement. In the end I was just able to finish my race. Lewis deserved the win, but we were maybe closer than some had expected.”

Kimi Raikkonen: “All through the race the car was behaving well, especially after the pit stop, but then I was stuck behind other cars and had no speed on the straight, so it was hard to get past. In the final stages, I tried to overtake Valtteri in the same place I had passed him earlier in the race, I had a good run in turn 3 and in the next one there would have been enough space, so I decided to go for it. I don’t know if he was not expecting me at all or if he did not see me, but once I decided to go there was no way I could back off. I tried to turn inside as much as I could, but there was no way to go and in the end we collided. It is an unfortunate thing for us and for them, nobody want to have an accident even if it’s part of racing. It’s really a shame, but my move was based on a good chance and not something completely crazy.”

Force India
Sergio Perez: “It feels great to be back on the podium and to be able to celebrate with my team. I have been enjoying my time with the team so much and this is a great reward for all the work we have put in together. The call to pit under the safety car turned out to be very good because it gave us track position ahead of all the battles. With one lap to go, when Valtteri (Bottas) and Kimi (Raikkonen) passed me, it felt like this result had been taken from us: I was obviously disappointed but I also knew I had given all I could during the race. There was no more I could do because I had been on the same tyres for more than 40 laps. When I finally managed to get back into third it was just an amazing feeling. I am happy I was able to share this second podium with my team. It’s a very special result and one that fills me with expectation ahead of the races in Austin and especially Mexico City.”

Nico Hulkenberg: “I didn’t have the best of starts, but then I was able to pick the ideal line on the approach to turn two. Unfortunately, I locked the rears going into turn two and, when that happens, you just end up in a spin. I hoped the whole field would get past without hitting me but unfortunately Ericsson got stuck with me and I couldn’t move away. The first lap is always a unique situation: I didn’t brake any later, but with cold tyres it’s really tricky and once the tyres locked there was nothing I could do to save it. It’s always a pity to go out at the start and it’s really frustrating because our pace seemed really good this weekend. I just want to move on and start thinking about the next race. At the same time I have to say well done to Checo because the podium is a great result for the team.”