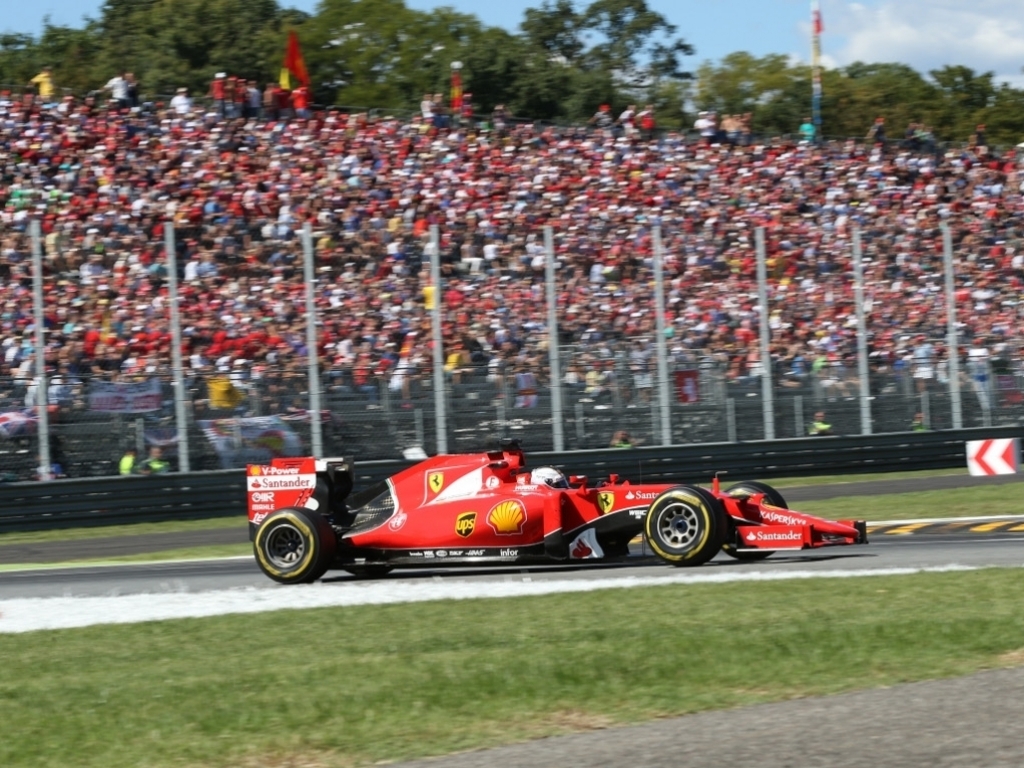 It's a seventh victory of the season for Lewis Hamilton while there is a Ferrari on the podium thanks to Seb Vettel.

Mercedes
Lewis Hamilton: "This weekend has been just fantastic. A perfect weekend for me – I can’t remember one like it. This race is so special for every driver. When you stand up on that podium it’s so emotional. It’s a really proud moment to be up there in front of that sea of fans and to walk in the footsteps of so many great drivers who have won here. The start was pretty close, holding off Sebastian. But from there I felt in control. The balance wasn’t perfect for qualifying but it was one of the best I’ve had in the race. I can’t thank the team enough for all their hard work. Everyone at Brackley and Brixworth is doing such an incredible job. I’ve never seen anything like it, so thank you everyone."

Nico Rosberg: "This weekend was very tough for me. There were just too many problems with my car which made it impossible to fight for the win. It hurts a lot when you have to retire with just two or three laps to go. A few corners earlier, I felt already that I had lost some power but was still hoping I could make it. Today was a massive step in the wrong direction for me in the Championship – but to complain doesn’t help in these situations. I just need to keep pushing and come back even stronger. Giving up is not an option for me. I will push hard to turn things in the right direction – starting in Singapore, which is one of my favourite races. I’m looking forward to it already."

Ferrari
Sebastian Vettel: "It's an incredible day, it's the best second place I ever had in Formula One. Thanks to all the tifosi for giving me those emotions today on the podium: it's fantastic to see so many fans, feel the support we get as a team. It just makes our lives so much more worth living when you see all the fans coming underneath the podium. In terms of emotions it's more than a victory. It's nearly a perfect day: I'm saying nearly because I don't know what happened to Kimi at the start. It's a shame because otherwise I believe we could have both cars on the podium today. The speed was there, unfortunately not enough to win, but we've tried everything. Monza is known to be a power track and we all know how dominant Mercedes was here last year. I believe the engine guys have done a great job. There are for sure things that we need to improve: we'll do step by step. Tyres were ok for the whole weekend."

Kimi Raikkonen: "I don't know exactly what happened at the start. As far as I know I did everything correctly, but the car went into the antistall and did not move at all. I still don't have the right explanation about what happened, but it's a really bad thing that cost us a lot today. If you start from second place and after a few seconds you're in last position it's not easy to see the positive side of the race: we wasted a big opportunity to fight at the front. The car has been working well all weekend and also in the race the behavior was good. We made the best out of it and in the end I managed to come up fifth. Obviously I'm a bit disappointed, as we were hoping for a better result in our home race in front of all our fans, but if we think that after the first hundred metres we were last it was still a good result. Overall we had a pretty good speed all weekend so in a way we have to be happy for what we have done because here we were expecting more difficulties. Today I was positively surprised that we could get through some cars that are very fast on the straights, this shows that we are doing the right things, pushing the car in the right direction and improving in all areas."

Williams
Felipe Massa: "It's really emotional to have been on the podium. It was a difficult but fantastic race, I didn't have the best start but I was still able to pass cars so it was good enough. I worked hard to open the gap to Valtteri, but when I pitted early it gave him the advantage on tyres at the end of the race. It was hard to keep him behind as he really wanted it, but I just about managed it. I am delighted for myself and the team, we got a lot of valuable points. It's special to be up on the podium at Monza again, and I really thank the team for their effort today."

Valtteri Bottas: "It was a good result for the team today, good points which is important. My pitstop lost me too much time which was crucial for the second part of the race. I managed to get extremely close in the end but it was too late. As I saved my tyres and brakes I was able to attack in the final laps but we had system issues on the last lap, so we need to investigate what happened because I also lost an opportunity there. It's a shame for me that I couldn't be on the podium but it's still good points for us."