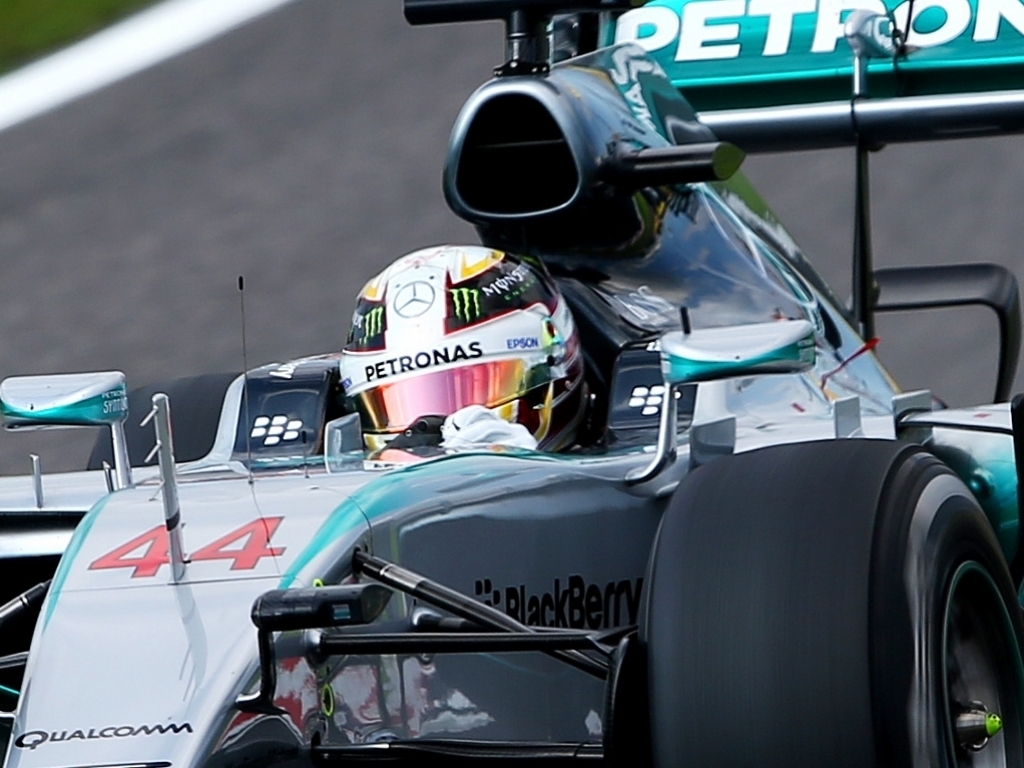 Lewis Hamilton equals Ayrton Senna’s record of 41 wins as he swept to victory in Japan on Sunday.

Mercedes
Lewis Hamilton: “I’m buzzing like you could not believe. As I’m walking through after the race I’ve got this rush but I’m thinking about all the different experiences I’ve been through and the people that have helped me along the way: my family, without whom I wouldn’t be here today, and everyone else that’s helped me – they know who they are. As I arrived today, I knew Nico had done a great job in qualifying and I needed to get a good start. It was very tight through Turn One but from then on it was just the most beautiful day. I have struggled every year at this circuit, but I always loved it. When you have the balance and the car is doing what you want it to do, and you’re attacking through the corners, there’s no better feeling. The engineers and everyone in the garage did a great job. We didn’t have much data to go through after practice, but the car felt unbelievable. I am really grateful to the team because without them I wouldn’t be here. I also want to thank my fans who have supported me all this way, and still we rise.”

Nico Rosberg: “A tough day for me. It was very close throughout the corner and on the exit I had to go off the track to avoid a collision, which cost me speed and pushed me back to fourth place. After that, I was fighting for P2 today rather than the win. But I was able to push then and overtake Valtteri, which was great. The team did also a great job with the undercut of Sebastian, this worked out perfectly with a really hard out-lap on the new tyres. So second place is damage limitation for me, as I had to win here in Japan to close the gap to Lewis. But I will keep pushing and try to win in Sochi now. I had lots of positives this weekend. So I will be back strongly.”

Ferrari
Sebastian Vettel: “All in all, today there is plenty of reasons to be happy with third place. At the second round of pit-stops, we were surprised by the out-lap that Nico pulled. I guess we thought the gap was big enough, so you can’t say we made a mistake. But in the end it’s a bit of a shame when you cross the line; I think that if we could have stayed ahead it would have been difficult for Nico to pass, as around there it is not so easy to get close, and we saw that he struggled a long time with Bottas. But we have to accept that Mercedes were just a bit quicker and for this reason they deserved to be ahead. Nevertheless, third and fourth is a great result for the team. We got good points, and it was a strong recovery after a difficult Saturday morning.”

Kimi Raikkonen: “Today we did the maximum we could and, considering where we had started the race from, fourth position is the best we could get. The car was OK and we had the right speed, but on a circuit like this, when you are stuck behind other cars, it’s always hard to overtake. We did a good job at the pit stop, managed to jump Bottas on the way out, and chose the right tyres at the right time. I don’t think we could have done much more. This kind of track is not the best for us right now, but it seems things have worked well today. There’s still work to be done, but we are doing the right things and going in the right direction. Obviously, we always want to be at the top, but I think we have done an amazing job all year long and since last year. Now we keep doing the same progresses and try to improve. We take what we have got today and go to the next race trying to do the maximum.””

Williams
Valtteri Bottas: “Not a perfect day for us, but we will take the ten points. I was hoping for a podium, but the pace wasn’t as good as we had expected. Defending from the quicker cars was hard and I think we should have pitted earlier for the final stop, but it’s always easier to say that after the race. ”

Felipe Massa: “A very tough day for me today right from the first lap. I had a bad start and then had contact with Ricciardo and it took me a long time to get back to the pits. From there it was the end of the race barring any miracle. We have scored some decent points for the Constructors’ Championship with Valtteri’s fifth but I had the car to contribute a good haul of points as well. We have to regroup and get those points back at the next race. “