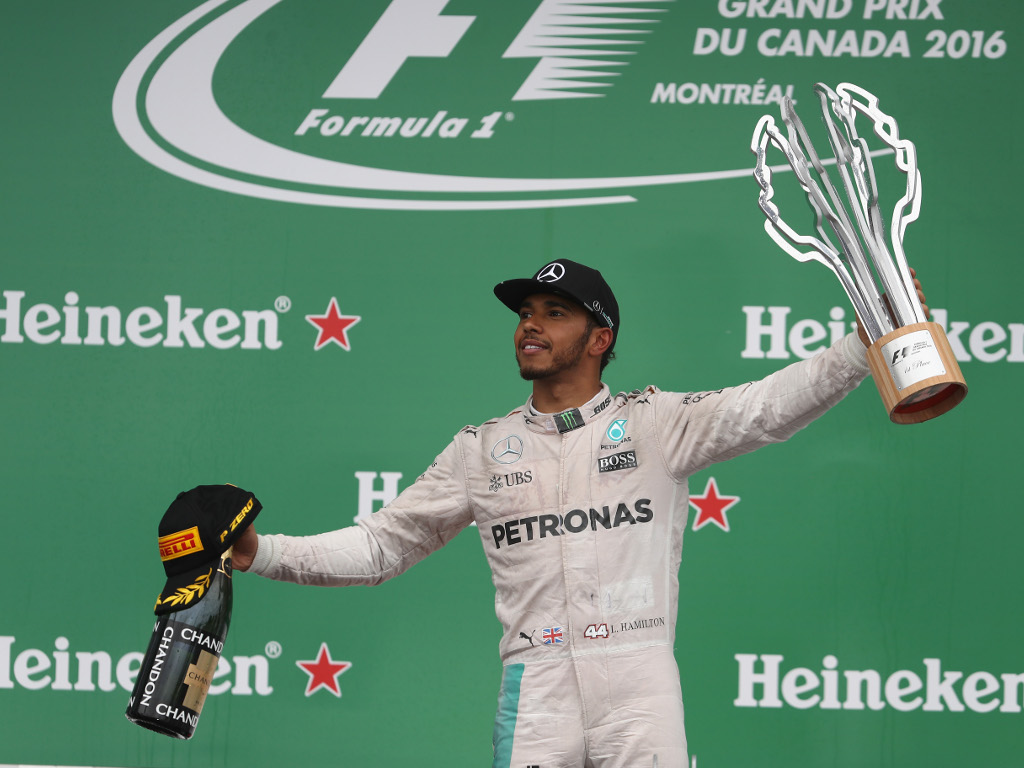 Meredes:
Lewis Hamilton: “I don’t know what happened at the start. My practice start before the formation lap was perfect and I thought “this is going to be a breeze, getting off the line”. But when it came around for real it felt like I was going nowhere, so I need to figure out what happened there. I then got massive understeer into Turn One with cars attacking from all sides and had an unfortunate tap with Nico. After that it was just about trying to hunt down Sebastian. He was lightning on the first lap and we both had good pace from there. Other than one small lockup into Turn 10 I didn’t make any mistakes all race, so I was really happy with that. It was very much about managing tyres today and the team were spot on with the strategy call. I really enjoyed the race – everything went unbelievably smoothly. Every time Sebastian closed up I just had enough to keep the gap. I was just so in the groove. Over the last 10-15 laps all I could think of was Muhammad Ali – float like a butterfly, sting like a bee – because it really felt like I was floating. For me, and everyone I’m sure, he was such an inspirational figure, so that one was for him. I won my first ever race here in 2007 and this feels just as great. It’s such a blessing. Thanks to everyone who came out today. We come here every year and have the best week.”

Nico Rosberg: “Today’s race was really tough. Starting at the beginning, Lewis had a bad start, mine was decent and Sebastian got a super start. So, I was alongside Lewis and tried around the outside. I had to try the move or accept I’d be behind him. In Barcelona it worked but this time it didn’t. It was a hard maneuver from him but that’s racing and I need to do a better job next time. I lost a lot of places going down the escape road and that cost me a shot at the race. From there I did my best to fight back and I there was a chance of a podium – but then I got the puncture and had to pit again – dammit! I was pushing hard after that to regain the positions but it was a massive mission managing the car with brake warnings coming on and running low on fuel. It was a good battle with Max – again, on the limit but good racing. I tried everything to get past him and had a massive spin at the end. On that final lap I just about managed to drag it round for P5 ahead of Kimi, so a disappointing result as our car was awesome today but that’s how it goes sometimes. I’ve got two days at home now to get ready and go for it again in Baku.”

Ferrari:
Sebastian Vettel: “Today it was a great race, I enjoyed every single lap and it’s just a shame that the trophy is not as big as it could have been. There’s no reason to give the team any criticism for the strategy: when I pitted for the first time we thought it would be quicker, so I was happy to come in. We expected obviously the tires to last a little bit less, but they didn’t. The good news is the car is working, we had a normal Saturday, which allowed us to have a great race. I had a perfect start, I reacted well to the light going off, I did not look at the others and only focused on myself and was able to fly past and by turn 1 it was done. I was very happy to be in the lead and push properly and then probably in the last corner I pushed a bit too much. Of course I would have loved to hit more than 1 or 2 tenths per lap, maybe 3, maybe 7 tenths for lap, but I think it was a great race and you should not get overexcited with strategy. In my point of view, I know that we have the best people in terms of strategy. I know that this car is a step forward, we know also that there’s still potential, and we’re not yet where we want to be. I also think we put ourselves under enormous pressure because we want to win. As a team, we came here and did our best, this weekend we were very close and hopefully next week we’ll be there.”

Kimi Raikkonen: “It hasn’t been an easy weekend, we tried to make the maximum out of that, but obviously we cannot be satisfied with the result. The behavior of the car was pretty ok in certain parts of the track, but in some others, with the cool conditions, I was struggling with the tires. When I was free to push it felt good, but then when I had to slow down for fuel saving the tires were losing temperature, they were cooling down and it was difficult to make them work again, and this went on for most of the race. Now I don’t know what to expect for the next weekend, I’ve only seen the layout of the Baku track in the simulator but I’m sure it will be a tricky circuit, it’s nice to go to a new place.”

Williams:
Valtteri Bottas: “I’m very happy with what we achieved as a team today. It’s a shame with what happened to Felipe, but this gives us a big motivation boost for the next few races. I think today shows that we are a strong team who can deliver good results. Our strategy was great and our pitstop was really good, yet again. It was definitely one of my best races. I’m really pleased with today and looking forward to the next race.”

Felipe Massa: “Of course I’m very disappointed not to finish the race because of a mechanical issue that we had. It’s a race where we’re supposed to score good points with both cars, but unfortunately we didn’t with mine. So we need to concentrate on the next race now as it’s a shame that it ended like this.”