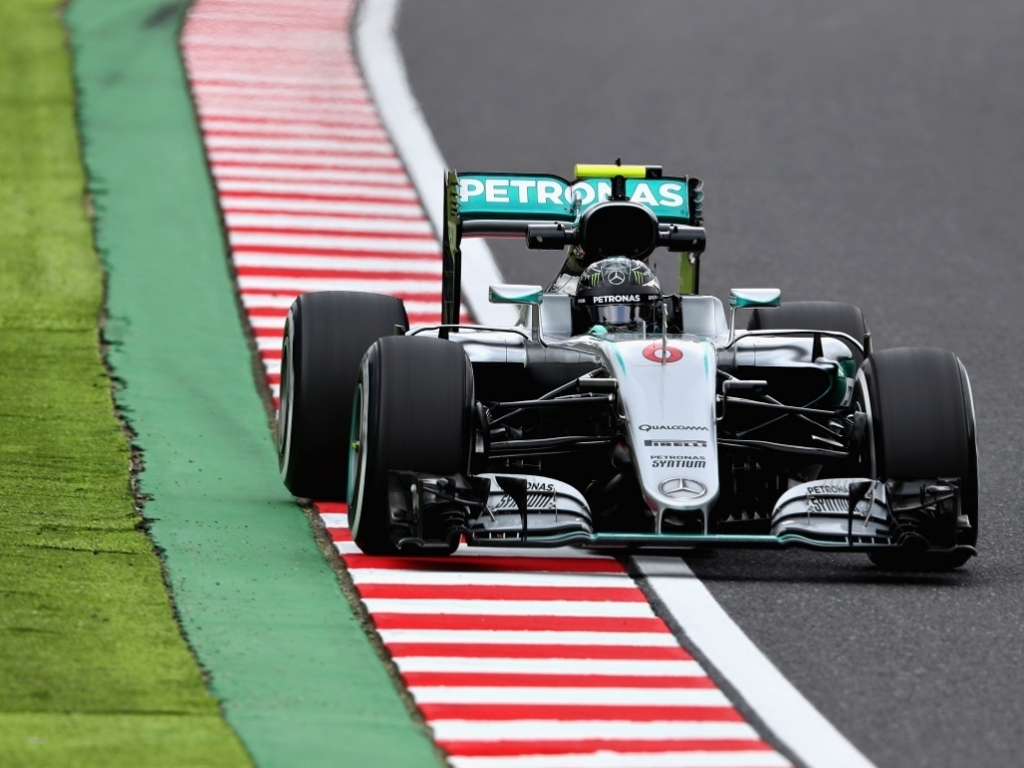 Mercedes:
Nico Rosberg: “What an awesome weekend, the whole weekend felt great from the word go. It has been very, very special especially on this legendary track, it is beautiful to win here. Congrats to everybody, all my collegues in the team for clinching a third Constructors’ title. It is so absolutely deserved, an unbelievable effort all these years. I’m feeling good cause I came here to win,  I’m well aware of the points. 33 points – it’s better that way than the other way round but it’s still Lewis that’s my teammate, so I always need to reckon with him. He’s going to be going for it in the last four races. There’s still a long way to go.”

Lewis Hamilton: “I don’t think the damp patch had anything to do with it, I made a mistake, working my way up from there was tricky but I did the best I could. I just got wheelspin … Honestly I don’t really remember [feelings after start]. I can’t remember at the end, I was just far back and I was just looking to go forwards. The team did a fantastic job and a big congratulations to everyone back at the factories and to the whole of Mercedes-Benz. To have had three years in a row of success, I’m very proud to be a part of it and happy that I could contribute to it today.”

Red Bull:
Max Verstappen: “We knew the start was going to be very decisive and we had a really good one today which allowed me to settle into my own rhythm. I’m pleased the starts are coming together, that’s two in a row now. I was then able to sit behind Nico (Rosberg) and control my tyres. The team gave me a really strong strategy, along with a car that felt very balanced so I was able to enjoy a successful race. I was really happy to be able to get in-between the two Mercedes cars, it is a great result yet again for the team. In the race we had quick pace but I think Nico was still only cruising. When I sped up Nico could match it and if I slowed he did also, he was in control. Lewis (Hamilton) was obviously a bit quicker in the final stages and I knew he was going to catch me, the gap time on the pit board was dropping every lap. Into the last chicane I saw him coming in my mirrors so I defended my position, this allowed me to hang on for the second place. I had some concerns about the blue flags, I think we need to talk about it. I have been in the same situation last year and earlier this year, I understand from their (back-markers) perspective you want to race but the guys lapping you are racing for a podium so you have to have a different approach.”

Daniel Ricciardo: “Today wasn’t a very exciting race for me, and unfortunately it just wasn’t my day. Kimi’s (Raikkonen) penalty was a bit of a bummer for us as it put us on the wet side of the grid and that compromised the start. I don’t think my launch was too bad but Lewis obviously struggled to get off the line and I had to go around him through the wet and that made me lose a place to Sergio (Perez). Seb (Vettel) had a good exit out of Turn 14 and made quick work of me on the straight, then he caught Perez quickly as well. That sort of shaped the first stint for me. We struggled to stay close to the cars in front as we couldn’t follow them in the dirty air, and we didn’t have the straight line speed to make an attack. We struggled in the traffic and fell behind the eight ball. In the final stint towards the end I had a clear track and I was able put in some good laps but it wasn’t enough. I’m not going to get too down about it. I didn’t think there was anything else we could have done today, it was just circumstances and how the race panned out. We’ll come back in Austin ready to have a good weekend on track and also eat plenty of barbeque. I’m going to diet for the next few days so I arrive lighter in Austin and can enjoy the local food!”

Ferrari:
Sebastian Vettel: “We had a very good start and made good progress in the first two laps, passing Ricciardo and Perez, then we were faster than Verstappen. I think today we had the second fastest car. So it was a question of time, but obviously Max came in as soon as he could to maintain track position, which worked well for him. We tried to go on the softer tire in the end, which initially we thought would work well, but then we had too much degradation and we were falling off this group. It is always easy to criticize, and I am sure there are many ‘experts’ that knew better, but on the pitwall as well as in the car, I was keen to go for this strategy so to extend the second stint. It’s a fact I lost big chunks of time with the blue flags. I always got the lapped cars right in sector one, when they can’t move, so I was losing a lot of time, and there’s probably where I lost track position to Lewis, who always seemed to clear the lapped cars in the straight. But then the pace wouldn’t have probably been enough to challenge for the podium.”

Kimi Raikkonen: “After a good qualifying yesterday, the issue with the gearbox and the consequent starting position change was not ideal in this kind of track. Obviously there’s a lot of disappointment, as we had a good car and if we could have stayed in front we would have fought with more free air and with a lot of speed. I had a good start but then I got stuck behind other people: it was really tricky to follow other cars and it affected quite a bit the behavior. It was also difficult to stay close to them and attack them. Once we got past them and I was on my own, the car was quick and handling well. For sure today we were fast enough for a better result. Unfortunately that’s how it goes…”