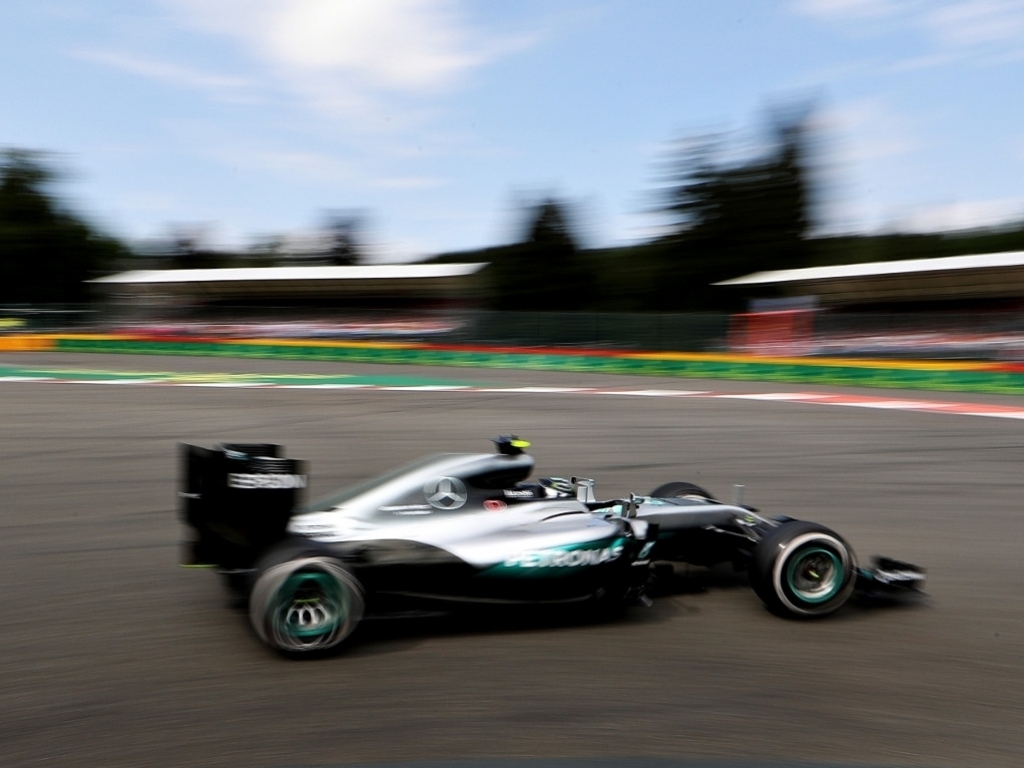 Nico Rosberg stormed to the win at Spa, beating Daniel Ricciardo, while Lewis Hamilton raced from 21st to third.

Mercedes:
Nico Rosberg: “I am so happy to win here in Spa at this legendary track. It wasn’t an easy weekend for us. We had to work a lot on the setup – but in the race it was perfect. The stints on the medium tyres were really good and I felt really comfortable at the start on the softs too. Our car was really great today, so thank you to the team for all their hard work in getting it spot on. It’s great for the team that Lewis was able to recover to finish in third place, so overall a great result for us. It was a great atmosphere here with all the Dutch people coming to see Max. They shouldn’t be sad because he is still young and I’m sure he will have a lot more races here with much better results. Now, it’s only a few days until Monza. The penalties for Lewis made things easier for me today – but he will be back in the battle for the win again next weekend, which will be exciting.”

Lewis Hamilton: “If you’d offered me third coming into this race with all the penalties I would definitely have taken it! I really wasn’t expecting that! As I said yesterday, I really didn’t know what would be possible today. But I came into the race with a positive mental attitude and it all came together. It was a steep mountain to climb – but we did it together as a team. I’m so happy and so proud of everyone. Changing so many parts on the car, it would have been easy to make mistakes. But the guys did an exceptional job and all three Power Units worked flawlessly. I think I now have more engines than most of the others, which is great. Now, the fight is really on for the second half of the season. The car worked really well out there today. The most difficult part of the race really was the mental approach from the beginning in terms of whether I risked it all at the start or hung back and tried to pick my way through carefully. I kind of went for somewhere in the middle – but then all this commotion happened along the way and I’m grateful I could capitalize on that. Coming from the back and having to make overtaking manoeuvres, I had to push a little bit more than you’d normally plan to, so we went for a three stop strategy. Whether or not I would have made it on a two stop with the medium I’m not sure – but I’m glad we didn’t take that risk. The team made the right call. I’ve been so impressed with the fans here this weekend. Naturally, a lot of them were here for Max. But I’ve seen loads of Brits here too and generally I feel like I’ve had great support right the way through, so thank you everybody.”

Red Bull:
Daniel Ricciardo: “I’m pleased with that result, I knew a podium was on today. Of course you can never guarantee, but I knew if we had the pace that we did on Friday, that we would be able to get there. With Lewis starting at the back it was an opportunity to get at least a second place, and we got that. A win is always the big target, but Nico had the pace that we expected, so second is the best we could have done. There was a lot going on at the start and I actually hit some of the debris which damaged the front wing, so the red flag helped us as we were able to repair it. Before that the car was quite affected. Then, after that we got going; there wasn’t too much action for me, but I was just trying to be consistent and the outcome was good! The fans this weekend have been awesome. The driver parade was great, 99% of the fans are here for Max but they were cheering everyone and it was good sportsmanship; Max got bigger cheers but they were waving and cheering for everyone, it was really good to see. So big respect to the Dutch and Belgian fans, they were really cool.”

Max Verstappen: “Today was very unfortunate. I didn’t start as well as I wanted but I got up the inside for the first corner then got squeezed by the two Ferraris. In the contact my front wing and the floor got destroyed so then the car was very difficult to drive and the race was gone. Still, I tried my best to come back especially for all the people who were cheering me on in the stands, but unfortunately I didn’t get in the points. Luckily we got Daniel on the podium so we still scored some more points for the team. It’s good to have another race next week and we’ll try to do the best job possible at Monza. The race didn’t turn out the way I wanted but before that we had a great weekend here in Spa and it was great to have some interaction with all the fans who came out to support me.”

Force India:
Nico Hulkenberg: “Today is a massive result for the team and I’m feeling very happy with fourth place. There were some unusual circumstances, but we were there to take the opportunities and pick up some very important points. At the start of the race things worked out really well for me. The first lap was great; I was up in second place following Nico [Rosberg] and pulling away from the group of cars behind me. Unfortunately, the red flag proved costly because it neutralised things and bunched everybody back up again. The restart was clean and the rest of the race was quite controlled – just managing my pace and looking after the tyres. There was a battle with Fernando [Alonso] coming out of the pit lane, but we managed to stay ahead and keep the fourth position. Maybe if things had worked out slightly differently, we could have been on the podium, but I’m satisfied with the fourth position.”

Sergio Perez: “It’s been a great day for the team and I am very pleased to finish fifth, but it was quite a tough race from the start. I chose a wide line going into turn one, but had to go far on the outside to avoid the first corner accident and that cost me a few positions. I dropped down to ninth and that compromised my race. I managed to make some good progress early on, but every time I switched to new tyres I found myself having to put a lot of stress on them as I needed to attack Felipe [Massa] then Fernando [Alonso]. I still managed to make my way through and bring home a good result for the team. Moving to fourth in the constructors’’ championship is a fantastic achievement for us, but we can’t get carried away because there’s still a very long way to go in the season. Hopefully we can keep our momentum going and keep scoring strongly.”