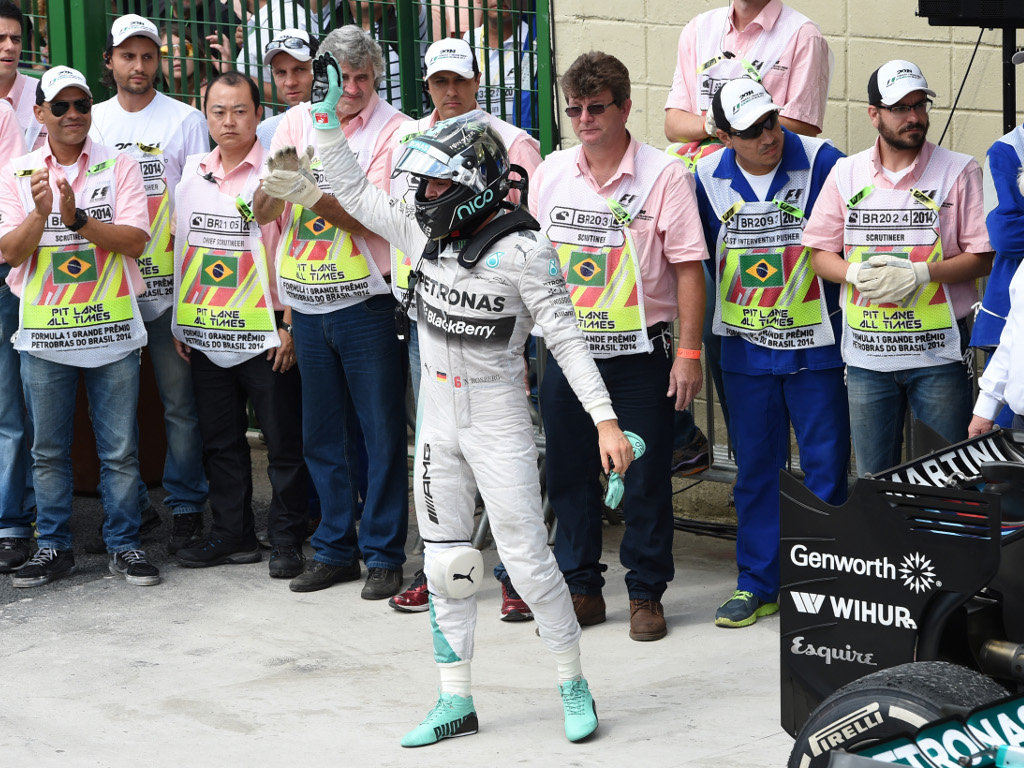 Nico Rosberg was back to winning ways in Brazil, beating team-mate Lewis Hamilton to the chequered flag while Felipe Massa was third…

Mercedes:
Nico Rosberg: “That was a fantastic weekend and I felt very comfortable over the whole three days. I had to learn from Austin, which was a big disappointment, and I think I achieved that. I was able to control the pace a bit better and didn’t let Lewis come too close. He drove really well and was always right there pushing me. When he spun I had a bit of time to relax and was able to save some life in the tyres for the end of the stint. That worked out perfectly and it was a great day with another one-two for the team. I was also happy for Felipe to be on the podium with us at his home race. The Brazilian people have been so great to us throughout this the whole weekend so it was also a good day for them. Now we have a great finale to look forward to in Abu Dhabi. I’m still believing 100 per cent that I can make it but, of course, I will need some help from Felipe or Valtteri or Lewis himself.”

Lewis Hamilton: “Naturally, you’ll always be disappointed when you make a mistake and I did that today. But honestly, I felt great out there. The car was strong, my pace was good, I didn’t give up, kept pushing and made up the time so that’s what’s most important to me. Generally, when I’m told to push it means the team is bringing me in that lap so that’s what I did. In the end, they left me out for another lap which caught me by surprise. By the time I came round to do the second lap my rear tyres were gone from where I’d been pushing so hard. Even so, it was my mistake locking up the rears and ultimately that cost me the win. Nico drove a great race – defending well and not making any mistakes. But it’s clear I had the pace. It’s not a big deal, though. That’s motor racing. Obviously, I lost some points which is disappointing. But it’s a great team result with a record-breaking one-two finish and I really enjoyed the race. The car is just fantastic – the best I’ve ever driven – so a big thank you to the team for all their hard work. I’ll be pushing just as hard in Abu Dhabi and hopefully we’ll get to have another great race like we saw today.”

Williams:
Felipe Massa: “It was not an easy race but what a fantastic result for me, for my family, and for the team to finish on the podium in front of my home fans. The energy from the crowd was amazing and really pushed me forward. The car had strong and consistent pace today and this allowed me to stay in third despite issues in my two pitstops. In the first stop I incurred a stop-and-go penalty after speeding in the pit lane after I hit the limiter twice by mistake, and in the second I stopped in the wrong box. We’re not normally next to McLaren and in the light their overalls looked the same colour as ours so this caught me out. In the end these issues were not enough to take away my podium because we had a good aggressive strategy and a really good car.”

Valtteri Bottas: “It was a race full of different problems for me and in the end it just wasn’t my day. I had an issue with my belts at the beginning that we resolved at the first pit stop but this lost me a lot of time and I also lost time in the second stop. The conditions were very challenging as tyre wear was high and all cars were experiencing graining. As a team we have managed to come away with some decent points and I’m happy for Felipe as the crowd reaction after he got out of the car was very special. These sort of days happen in Formula One and we need to regroup and make sure that Abu Dhabi is a problem free race for us.”

McLaren:
Jenson Button: “Judging the race was so tricky today. I pushed really hard on my first stint on the Prime [tyres] so as to maintain the gap to Valtteri [Bottas]. That meant I destroyed my rear tyres – but I reasoned that, if I could keep using DRS, I could establish a gap to the guys behind me. It was worth it, and it worked, but it meant I had to back off during the following stint to look after my tyres. It all went pretty smoothly until my final pit-stop – there was a bit of miscommunication about stopping, which meant I ended up doing an extra lap. That could have cost us a chance of the podium. It’s a shame we couldn’t hang on to Felipe [Massa], but it was still a fantastic race. I really enjoyed it. One of the best aspects of it was my great fight with Kimi [Raikkonen] – you always push to the limit with him, but you never go over it – so I enjoyed that very much.

Kevin Magnussen: “That wasn’t a great race for me, which is disappointing. I had a lot of tyre degradation – I tried my best to take care of my tyres but it just didn’t seem possible today. I tried to keep people from getting past me, but guys like Fernando [Alonso] and Nico [Hulkenberg] just had more pace than I did, so it wasn’t possible. We need to sit down and have a look at why it didn’t go right for me today – I’m sure we can find the answer. On the positive side, it’s really good that Jenson scored the points he did today. Fourth is very impressive. I’m really happy for him and for the team today.”