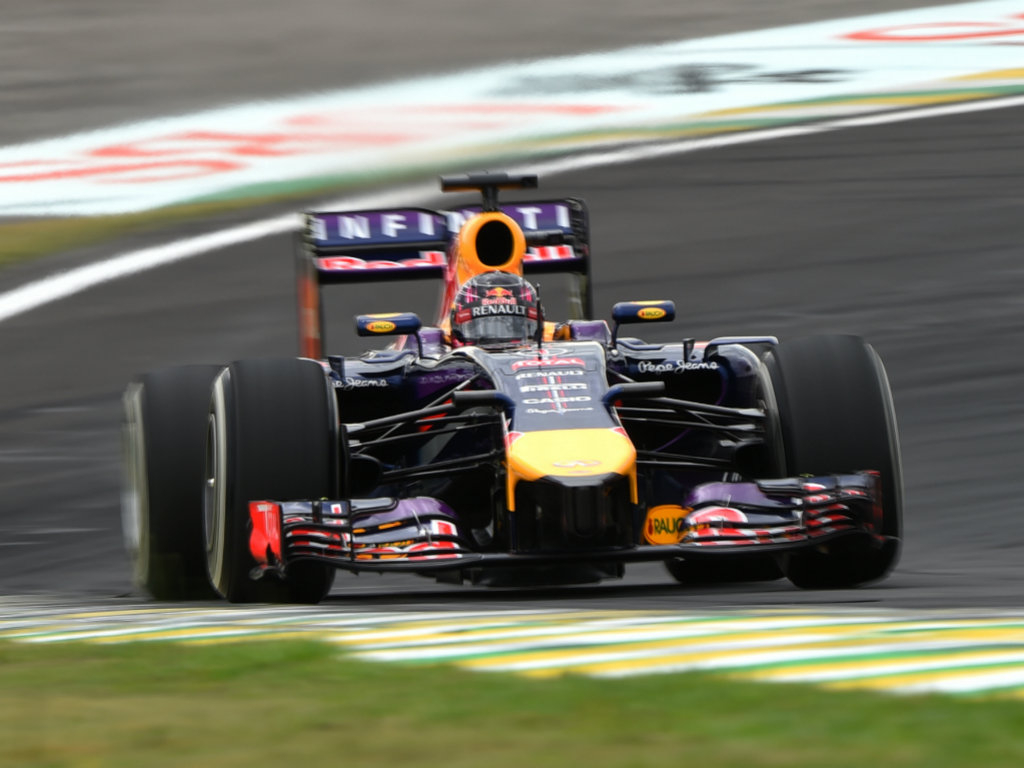 There were points in the Brazilian GP for Sebastian Vettel, Fernadno Alonso, Kimi Raikkonen and Nico Hulkenberg…

Red Bull:
Sebastian Vettel: “I had a good launch at the start and then into Turn 4… maybe I don’t have the best memories of Turn 4 here from two years ago, I didn’t know how aggressive Kevin (Magnussen) was going to be going into it and I left a bit too much space. I went a bit wide and lost two positions as I couldn’t get on the power out of the corner. Then I had to fight hard to get the positions back during the race which we did, especially with strategy. I hoped to get maybe one more position to finish fourth, but in the end it was a good result for us here.”

Daniel Ricciardo: “When I went into Turn One, the car went to the right and I knew there was a problem. I came into the pits and the team told me it was suspension failure and we retired. It had been a bit of a boring race, we were close to everyone but not close enough to have many fights; I would have liked to have had a bit more fun, but it didn’t really happen. It’s a shame, but I had a pretty good run until now, so I can’t be too greedy. It would be good to finish on the podium at the final race of the season.”

Ferrari:
Fernando Alonso: “After a far from easy weekend, I am reasonably pleased with the outcome of the race, because even if we weren’t very competitive, we managed to score a good number of points. Today, degradation was particularly high, especially in the first stint on the Softs, which lasted less time than expected because of graining. When I passed Kimi, my tyres were newer than his, as he was on a two stop, but I was having to save fuel and after that overtaking move, there was nothing more I could do. Now there’s just one race to go this season and in terms of the Constructors’ Championship, we hope to manage to keep McLaren behind us in the final race in Abu Dhabi. As for myself, I reckon I’m in the position I deserve, because others have done better.”

Kimi Raikkonen: “Overall, this has been a positive weekend and even today in the race, I felt very good in the car. During the second stint, we realised that if we went for a two stop strategy, we could make up ground, but then, at my second pit stop, I lost valuable time and that cost me some places. In the final part of the race, I had to fight off Button for a few laps and when Fernando caught me, tyre degradation meant I couldn’t fend him off. We leave Interlagos with a good feeling and even if we still have a lot of work ahead of us, this continued progress makes me confident for the future.”

Force India:
Nico Hulkenberg: “It was quite a cool race and very satisfying to finish in eighth. With a three-stop race you are always pushing, but my race was not too complicated and I was on my own for a large part of the afternoon. I also had a few nice battles and it was good fun. The car felt a bit better today compared to earlier in the weekend so I was more comfortable and really able to push. The team made the right calls on the strategy and we maximised our performance with the tyres in these very hot conditions. I finished just behind the two Ferraris and maybe with one or two more laps I could have finished sixth instead of eighth, but that’s racing.”

Sergio Perez: “It was a difficult race and things didn’t really go my way all weekend. With the track time we lost on Friday and the grid penalty yesterday, we always knew it was going to be hard to recover the lost ground. I tried my best to fight through in the race, but I lost a lot of track position following the five-second penalty and for most of the afternoon I was stuck in traffic. I couldn’t make any progress and the cars around us were on a similar strategy. So it has been a disappointing weekend and I just hope we can have a better result in Abu Dhabi.”