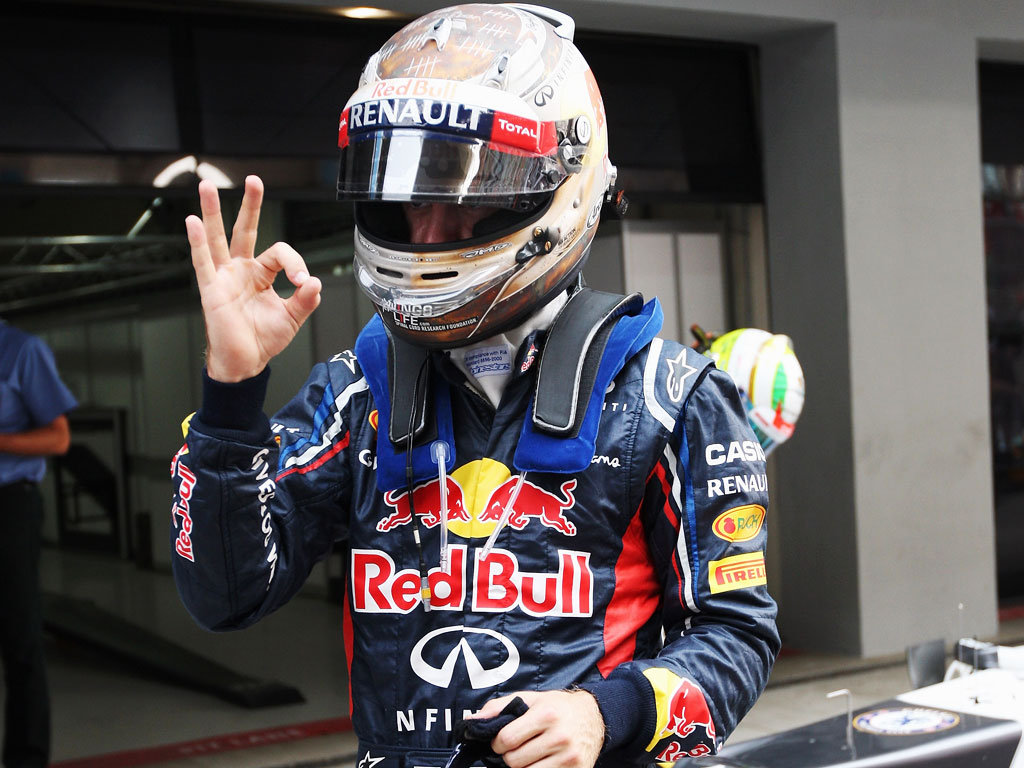 Red Bull:
Sebastian Vettel: “All in all, it was a very good race for us and I’m happy with the result. I had a good start, Mark had a better one and it was close in Turn 1, but I had a good exit from Turn 3 and got ahead. I was able to open a gap, which was important. I felt very good on the soft tryes and was competitive, I could have stayed out even longer I think, but at some stage you have to cover. McLaren and Ferrari were quick on the hard tyre today, so it was important to have a gap to them. I saw some sparks at the end from the car, but we saw a lot of cars throwing sparks this weekend, and we joined them. It was a great day for us and an important step.”

Mark Webber: “We had a KERS issue that we had to manage. It’s maybe hard for people watching to know what it affects on the car, its power on the straight obviously, but also managing brake balances and those sort of things. The guys were trying to help me get the KERS to recover and were talking with me on the radio. In addition, when you have a one-stop race, it’s always a chance you have a front-right lock up. As the fronts are very important you need to look after them which can affect the rhythm a little bit, but I tried to stay as cool as possible. Overall, I was pretty happy with how I drove; we should have finished further up the road, but it’s the way it was today.”

Ferrari:
Fernando Alonso: “We can fight the Red Bulls, but at the moment, we still don’t have a car capable of winning. Once again this year we have Alonso seen that, in the race, the situation is much better than in qualifying. A great start, a great first lap, a good top speed and the right tyre management produced, along with me driving at 120% for each of the sixty race laps, this second place. We did what we could, as at every race: if, come the end of the championship we will have won, then no one will be able to say it was down to mistakes from the others, but because we always did the maximum. We will already have some updates in Abu Dhabi: let’s hope we can make a step forward because it will be important to start making up the points gap there already. There are 75 points up for grabs which is a lot. I am still optimistic even if we are all aware that we have to improve our performance, especially on Saturday. I don’t know if this was my best performance of the season, as it’s always difficult to make that sort of call. I am particularly keen on the one in Valencia or at Monza, but this one is definitely up there: I pushed from start to finish, maybe taking some more risks in overtaking compared to previous races. Today, after the start, I tried to immediately attack the McLarens getting into their slipstream. They were fighting among themselves and maybe they forgot about me and I managed to get past at least one of them. Then I also managed to overtake Button just a few laps later, but the time lost in those few laps allowed the two Red Bulls to pull out a bit of a gap. In the second stint, I made the most of Webber’s problems with the KERS to overtake him: yet again we have seen that anything can happen and that the races are always long and difficult…”

Felipe Massa: “It was a very tough fight, from start to finish. After around 20 laps, I was told from the pitwall that I had to try and save fuel, so I ended up doing over half the race without being able to go flat out and I can assure you, it was definitely not easy, because Kimi was always very close to me. It wasn’t the result I wanted, but all the same, these are important points for the Constructors’ championship. The time lost in FP2 cost me dear, mainly because we were unable to optimise our package. The duel with Kimi after the pit stop? I managed to come out of pit lane in front, but then I let him through at Turn 3 because he was still very close and I wanted to have the DRS down the straight. I think he realised that, but by then it was too late and I had the advantage and managed to get by. Now we go to Abu Dhabi, which is something of a second home race for Ferrari, as we have the beautiful theme park there. Let’s hope we have some more updates on the car and can secure a better result than this sixth place.”

McLaren:
Lewis Hamilton: “I don’t yet understand why I got such a poor start – it lost me ground and then I fell under attack from the guys behind. During the first lap, I was primarily focusing on not colliding with Jenson, then I saw Fernando [Alonso] in my right mirror. He was towing me from very far back. Even if I’d had a better start than I did, the guys in front were still maybe a bit too fast, particularly in the first stint.

“During that first stint I started having a downshift problem – I was having to change down with my right hand instead of my left, so the team elected to change the steering wheel at the pitstop.

“I’ve never had to change a steering wheel during a race before. We’ve done it in Barcelona testing before, but never in a race. Even so, the guys did it fantastically quickly, under immense pressure, so I want to say ‘well done!’ to them all. I took the wheel off before I’d even stopped the car, and threw it out of the car. The team then fitted a new one, I clicked it into first gear, and I was away – all in just a bit over three seconds flat.

“I tried to chase down Mark [Webber] in the closing laps, but by then it was too late and he was going too quickly for me to be able to mount a serious challenge. But I never give up, and, right until the very last corner, I thought I might just be able to catch him, but in the end it wasn’t to be.

“Still, I loved it out there today – I can’t remember the last time I’ve pushed so far, so hard, for so long, right on the limit – it felt great. It felt fantastic, in fact, to be in the middle of such a battle.

“I’m so proud of all the guys in the Vodafone McLaren Mercedes team, too – it was a really great race.”

Jenson Button: “The start of the race was my highlight – there were just millimetres between Lewis, Fernando and me. I’ve never had a start quite like that before – unbelievably hard-fought – and none of us hit each other. It was so close, so tight, yet so clean. It’s just a pity that the rest of the race wasn’t as enjoyable!

“My first stint was pretty disappointing; I think maybe we struggled more on the Options [tyres] than the other runners did, so I couldn’t keep the guys behind me. I then made my pitstop earlier than anticipated, so that we could find a better balance on the harder tyre, but that didn’t work out because I got stuck behind Romain [Grosjean], which lost me more time.

“But getting fastest lap on the final lap was great, and I think there’s plenty of potential that we can build on and take with us to Abu Dhabi next