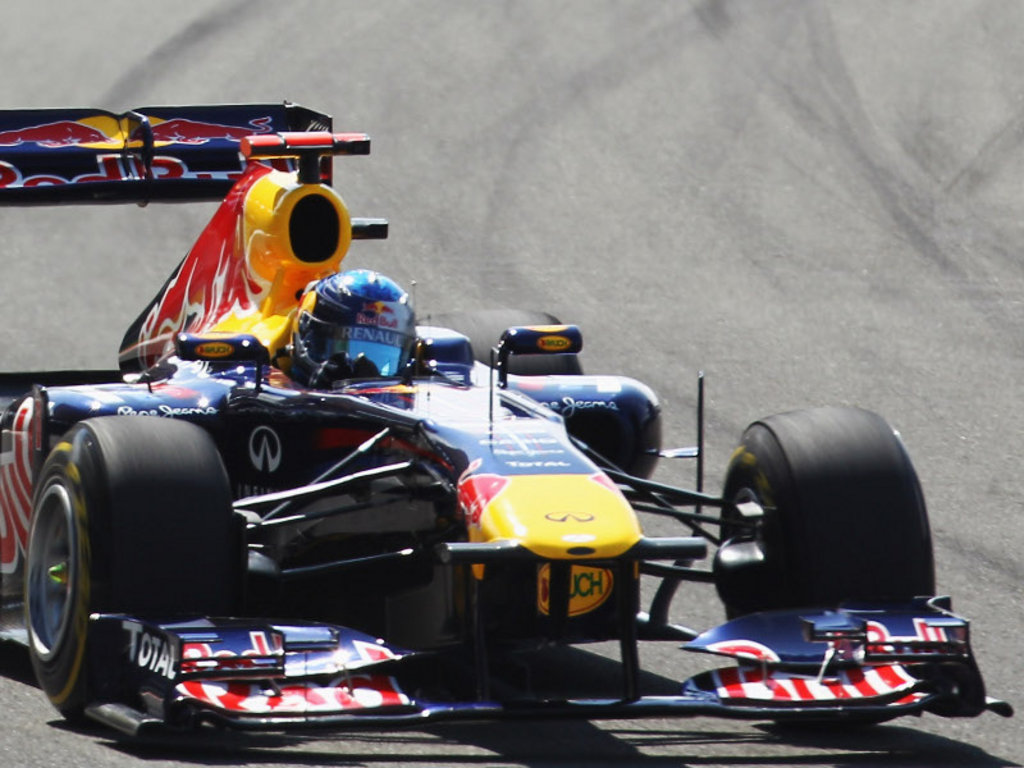 Red Bull:
Sebastian Vettel: “It was a great result today – especially after I gave the team so much work on Friday. I hope giving a victory back goes some way to help them forget it. Saturday morning was crucial. When I walked into the garage everyone gave me the impression that nothing is wrong and there was nothing to worry about. The whole team was working so hard to get the car back together and times like these are important. The team are close to me and if they are not happy or unmotivated it reflects on me and the other way round, so after being a bit down on Friday, it picked me back up. In the race we had a very good first stint and got a gap and you can always benefit from that cushion. At the end I did two short stints, which was the right thing to do – it was seamless today. We don’t know what happens next, so we have to take it race by race. There will be days when we are beaten for definite, but we need to minimise the loss – but for today, it was a great result for the team.”

Mark Webber: “It was good to get second place – and a relief to finish there and not third. In the end it was a good fight with Fernando, you lose a bit of time when you’re into each other like that, but it turned out okay and I got him back in the end. For the first stop, the team pitted me earlier than expected as they were worried about the undercuts coming into play. Ferrari saw the same thing and it was really a race between us two from then onwards. At that point, you make your bet that you will be having a few stops during the day. It was a good victory for Sebastian and Fernando drove well too – it was a great result for the team with a one two. The grip wasn’t great at the start, but I will leave Istanbul happy – it was my best result of the year so far.”

Ferrari:
Fernando Alonso: “I am pleased with this result, which is down to three weeks of hard work from the entire team at Maranello and at the track this weekend. We had not started this Grand Prix on the right foot, after having quite a few problems on Friday, but then we moved forward and today it was great to be back fighting for the top places. We had come so close to the podium already in Malaysia and in China and today we managed to jump onto it, but this is only a first step: we must continue in this direction. Given the shape we were in at the start of this season, this is a great finish. The next three or four races will be crucial. At 99% I could not have fought with Vettel, but the remaining 1% went when I was stuck behind Rosberg for too long: maybe I could have put him in difficulty, forcing him to push even more. In the end, Webber passed me because he had the benefit of a new set of tyres, while I had none left. I know it seems strange having to stop eleven laps from the finish, but it was getting hard to keep the car on track and there was a risk of ruining everything. There is more overtaking, but I think that has more to do with the different behaviour of the tyres rather than the moveable rear wing. It’s true that the gap in the classification is very wide, but there are still so many points up for grabs: there is certainly no need to give up.”

Felipe Massa: “Everything happened to me today and I was not able to get the result that was within my grasp. It’s a shame, because the car was competitive and the pace was very good. We did the first stop at the right time, but already at that moment, I lost the place I had just taken off Hamilton. Then I also had problems at the third and fourth pit stops: we have to all work together to improve this element of the race, which is becoming really very important. I was always fighting with other drivers, which meant I was unable to get the most out of the tyres, as Fernando was indeed able to do and he definitely had a cleaner race than mine. The positive thing about this weekend is the improvement in performance of the car: we had a bit more aerodynamic downforce and also greater speed on the straights. It’s an encouraging sign, but we have to continue moving in this direction, introducing new parts already in Barcelona.”

McLaren:
Lewis Hamilton: “I got a pretty decent start but made a mistake on the opening lap and lost a lot of ground out of Turn Three when I was trying to go around Webber. That was the defining moment of my afternoon: if I hadn’t dropped behind Fernando [Alonso] and Jenson, I think I could have got up to third and battled for second in the race. The battle with Jenson was good and fair, as always, but that, and the fact that I had too much front-wing dialled into my car meant I struggled to look after the rear tyres; so my tyres were finished and that’s what kick-started the four-stop strategy. Considering the time I lost at my third stop [when a pair of cross-threading wheelnuts on the right-front caused a delay], I think we recovered reasonably well. I don’t think that made a huge difference to our overall finishing position, and I was quite happy with the way the car behaved once we’d taken out some wing. We were definitely able to do better today – but to start fourth and sixth and finish fourth and sixth was a good recovery.”

Jenson Button: “It’s a pity to finish so far back after everything in the first stint seemed to go so well. Strategy-wise, I don’t think we got it right today. My battle with Lewis was great fun and I there was a lot of excitement on the track, but I was disappointed to finish where I did: the car felt very good but we just went the wrong way on strategy. I think most people probably started the race aiming for a three-stopper, but because many of them damaged their tyres in the first stint, they changed their approach. We didn’t, and I was able to put a couple of laps on everyone and my tyres still felt pretty good – but I felt the next two stops were earlier than the tyres could have done, which is disappointing. We didn’t leave the stops late enough – the tyres were still good at the end of every stop, so we should have stayed out longer because it just made the last stint extremely difficult. During the final stint, I was trying to get the best out of the car but it’s so hard because the difference in pace between a fresh and used set of tyres is so great.”

Mercedes GP:
Nico Rosberg: “My start today was fantastic to overtake Mark and be running in second place on the first lap, but from there I was struggling with my tyres on the first stint. Our strategy worked out well to bring me back into a decent position so we can be reasonably satisfied, and I’m happy to be in front of Jenson and just a few seconds behind Lewis in the McLarens. There is still a gap to the top but we have continued to improve the car this weekend. We don’t know exactly why we are better in qualifying than in the race but we will work on this. Overall I had another good weekend and I’m looking forward to Barcelona.”

Michael Schumacher: “A lot of fighting and action today, and that was probably the positive part of my race. Obviously I am not very happy with my weekend, but I’m responsible myself for the result. The incident with Petrov kind of dictated my race: we were very close and I was surprised that we touched but it was mostly my mistake. After making such an early stop, the way the race played out was given from there. What we can take away from this weekend in Turkey is that we have confirmed our good trend and we still have things to come to help us deliver more of our potential.”