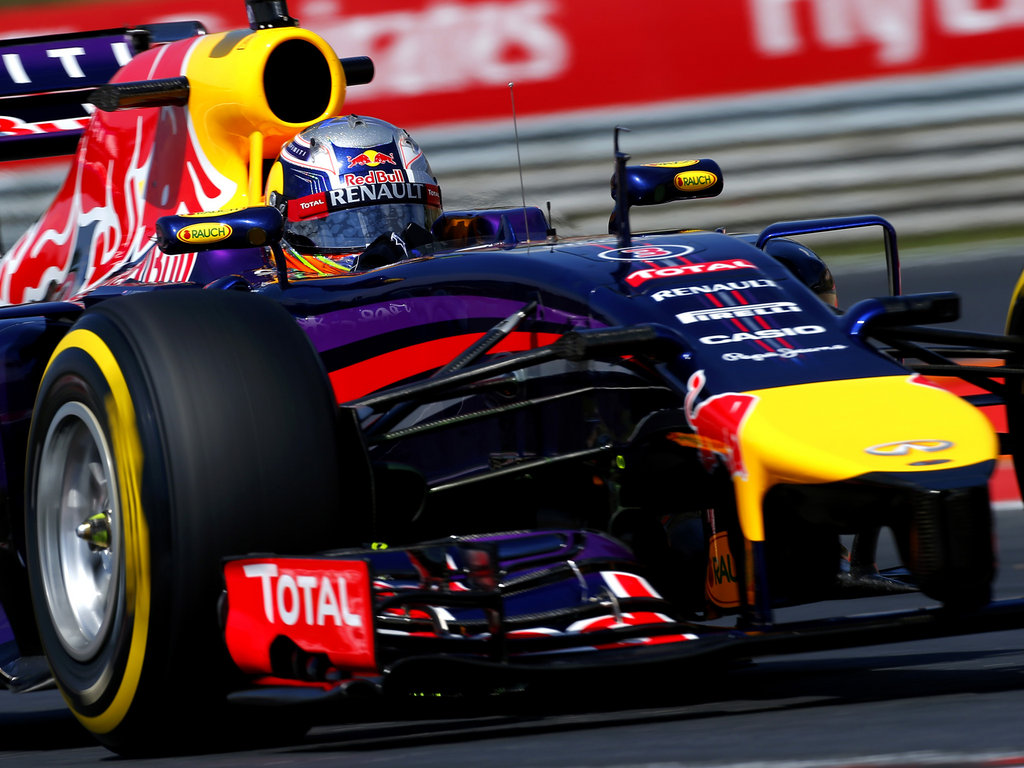 Daniel Ricciardo pulled off a stunning win in Hungary and he was followed home by Fernando Alonso an Lewis Hamilton.

Red Bull:
Daniel Ricciardo: “Winning this today, it honestly feels as good as the first. It sank in a lot quicker this one, so crossing the line today I knew what was going on a bit more and it’s like I could enjoy it immediately rather than it being delayed, it was awesome. To have to pass guys again to win the race, as I did in Canada, makes it a lot more satisfying, knowing that we did have a bit of a fight on our hands – you beauty! In this environment now I feel, I am a different driver and in a way a different person, a different sportsman than I was last year. I’ve got a lot more belief in myself and it’s cool, I definitely feel like I belong here now and I’ve got confidence; obviously we’ve converted two races into wins this year so far and I think that confidence is showing. I’ve got some friends from Australia here this weekend, so the plan was to always have a few drinks tonight, so I think we’ve got an excuse to now!”

Sebastian Vettel:“It wasn’t a great race. I spun, which was my mistake, and before that I was unlucky with the safety car in the first stint. The timing meant the first four cars lost positions to those running behind. Unfortunately we were then in the wrong mode for the restart and I lost two positions. It’s good for Daniel that he won today, I’m happy for him.”

Ferrari:
Fernando Alonso: “This podium means a lot to me and the whole team, because after so many difficult races, we managed to get the most out of everything, also taking a few risks and second place seems like a win. To do 31 laps at the end on used Soft tyres was a great challenge. At that point, the strategy suggested that if we had made a third stop, we could have finished fourth, but we decided to run to the flag instead. This race shows that anything is possible when there are unusual conditions like today, with a wet start and the appearance of the Safety Car. We managed to make the most of all opportunities that presented themselves, taking the best decisions even at the most difficult moments. Sure, the characteristics of the circuit, with its limited overtaking opportunities, helped us and that’s why we have to be realistic and continue to work on the car, to improve in all aspects.”

Kimi Raikkonen: “Today’s race was difficult, but much more fun than the others, as I had a good feeling with the car, the pace was good and I felt I could push. After the way qualifying went yesterday, sixth was the most we could hope for. At the start, I got away well but then I lost vital time behind a Sauber and when I caught Massa’s Williams, I couldn’t get past: here in general, overtaking is not easy and we lack speed down the straights. Sure, this is a good team result, but we must not get too excited, because even if there are signs of improvement, we still have much work to do in a lot of areas to get to where we want to be. We’ve had a very complicated start to the season, but I hope the second part of the championship will go better. I have great faith in the team and I feel we are going in the right direction. Even if it’s going to take some time, I’m sure the results will come.”

Mercedes:
Lewis Hamilton: “It is a great result today; I was just pushing as hard as possible to get as high as I could. It was obviously damage limitation after what happened yesterday. I can’t express the pain I feel when we have issues such as in the last couple of races; it’s hard to swallow and difficult to come back the next day and get the right balance between not attacking too much, but pushing to the limit. The two safety car periods helped quite a lot, but naturally I looked fast and had the pace this weekend, so there was an opportunity for more points. I was in the same race as Nico and if I let him past and he had the opportunity to pull away, then he would have come back and overtaken me. I didn’t understand why the team asked me to do that as he didn’t get close enough to overtake and I didn’t want to lift off and lose ground to Fernando. I would like to say a big congratulations to Daniel and Fernando. It was close at the end and it was getting very hard to keep Nico behind as he was catching at close to 3 seconds a lap. Coming back through shows how great this car and team is, and this result is much more satisfying than an easy win. Going into the break, I’m still in the fight for the championship, which is very satisfying.”

Nico Rosberg: “That was a disappointing afternoon. A few things didn’t work out for me and it was a very up and down race. In the beginning it was all under control. Unfortunately the safety car cost me the lead, because I just missed the pit entry and then I couldn’t pit. I also had some braking issues after the safety car went in and a difficult period of time with handling this, which cost me some positions. Then I was able to push a lot. I had a great last stint and at the end there was one chance to overtake Lewis in the last lap, but it didn’t work out. So that is massively disappointing. We need to sit down and analyse internally what went wrong today. I’m still leading the championship, which is a positive thing, and I’ll be ready to attack again after the summer break.”

Williams:
Felipe Massa: “It was a very difficult race with a lot happening. We had many fights and it was difficult to stay on the track. We took some risks with the tyres in the pitstops and in the end it was a good result. Now we can look forward to the second part of the season and I’m sure we will score a lot more points than we’ve scored up until now.”

Valtteri Bottas: “After three podiums in a row P8 is not that satisying, but we got some good points as a team. There was more to come today but we were unlucky with the safety car when I went from P2 to out of the top 10. We need to analyse this race then focus on the next one. There are many more good moments for us to come this season, we are getting stronger.”